My mom is moving, but not to Tennessee. Oddly enough the day she was going to book her flight to Nashville, a new listing came on the market. She's been looking in Pahrump for 6 months or so. She has put offers on dozens of places, but she was repeatedly outbid. None were too upsetting, because she didn't LOVE any of them, but they each had potential. This latest one, though, she loved. It's is in really good condition, too. She acted quick and won a bidding war. The house is hers.

It's a bit closer to Vegas, it should shave 10-15 minutes off the drive. That'll be nice to get door-to-door in less than an hour. She'll keep her two acres, and the living space is about the same. She is losing a garage, however. But a shed or two should resolve the need for storage space. The best part is that she'll own her house free and clear. She won't ever need to worry about losing the roof over her head again. It's a huge relief for me, so I can't imagine how relieved she must be.

She's expected to close and record at the end of next week. Mike is flying in from Chicago on Friday to lend a hand with the move. He'll likely be around for a month. The move will be one helluva task. The usual stuff is little concern other than a ginormous armoire and heavy big screen tv. Hopefully, Mike and Blaine can manage. Frank won't be much help, he has to be cautious with any lifting to keep back problems from reoccurring. The ordeal will be moving the animals and their stalls, cages, and fencing. Ever moved two horses, three goats, three dogs, a pig, a flock of ducks and geese, a slew of chickens and two peacocks? Me, either. I'll let you know how it goes.

To make things a bit more complicated it's baby time on the ranch. farm, whatever your preference. Goslings hatched last week. Here's Gooseston, Nicky named him. 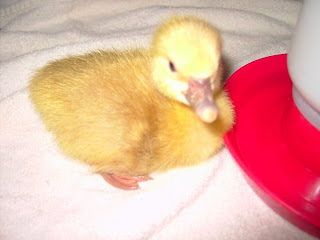 And you might remember me mentioning the chicken eggs she is incubating, well two hatched yesterday. She hasn't sent me photos of them yet. More are due shortly.

The next few weeks ought to be wild.