Back in June, I was able to cross an item off the bucket list - Catch a game at Fenway. Since 1912, it has been the home for the Boston Red Sox and it is the oldest ballpark in MLB. We were lucky that our summer trip coincided with an evening baseball game where their Sox took on my Sox.

Before the game we met Frank's coworker & friends for of drinks at the Bleacher Bar in Fenway Park. It's a very cool bar and one of two ways to see batting practice (the other being a VIP tour). Frank loved it because it's the only place in Fenway that will serve Bourbon straight.

My goal is to see all the ballparks one day, so it was a big deal to see Fenway. We sat in the original seats behind homeplate. Which sounded like a much cooler experience that it actually was. Not only do I not recommend, I'd advise against those seats. The view was great, but the seats? Man, they are rough! I have sat on tree stumps that were more comfortable. I insist my tailbone was bruised for a week, at least. Frank couldn't sit comfortably his knees were practically at his nose. It was tight.

Our routine is to try the local grub while taking in a game. Tasty's was the place to try. I can't say I was wowed. I enjoyed the tots more than the cheeseburger. Vermont cheese or not, gimme In-N-Out any day. 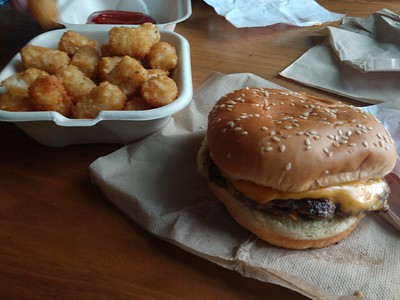 We also had beef with adult beverages at the park. Frank was refused whiskey without soda. I only found vendors selling Budlight or Sam Adams. Both are a hard pass for me. I saw Harpoon taps and advertising, but none actually for sale. The disappointment didn't end there, our Sox, despite an early lead also lost. Despite the loss, the achy back & butt and dying of thirst. I was happy to cross another ballpark off the list. Especially, one with such history.

Posted by Kellee at 3:16 PM No comments: 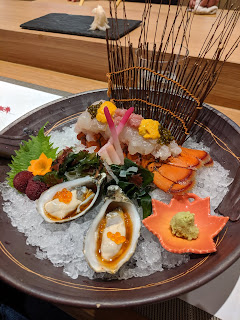 With only two seatings a night, accommodating only eight guests for an intimate affair. We were extremely fortunate to secure seats with no prior notice. Our party of four were immensely grateful for the experience. The Omakase menu packs a punch at $195 per person, but it was worth every penny. We gorged on decadent delights, the freshest fish and simply stellar A-5 Wagu.

Over the course of two hours, you'll be whisked away on a tremendous journey from coast to coast and around the globe. The menu varies day to day, but more than 20 dishes are showcased. It is truly a treat. Especially since the new location is minutes from the strip or a $10 Lyft, it's easy find for locals and visitors.

From my first bite of foie gras of the sea, to the aromatic broth with rare mushrooms and omelet, delicate lobster sashimi, buttery briny uni, the sesame chocolate cake and everything in between is carefully crafted for pure enjoyment. I typically dislike traditional staples like soy sauce and ginger, but even those were unlike anything I've tried before. 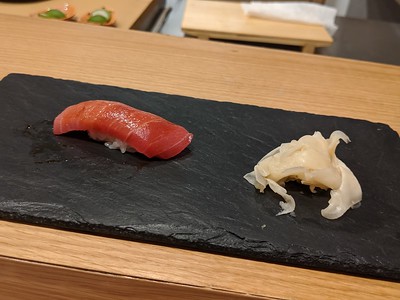 And for the real stunner, I mean. Oh my my!

And last, but not least.

Gluttony at its finest. Truly.

That's the short and sweet of the weekend we just spent in Los Angeles. We snagged $19 airfare on Frontier, which made our trip out there cheaper than the 15 mile Lyft ride from LAX to our hotel. I think the flight was shorter too. I booked the Sheraton Grand hotel via Hotwire. It has superb location in the heart of DTLA. It was perfect! Walking to the Staples Center was a breeze and having the Metro stop right there connected us to the rest of LA with ease. There is a cool lounge on the third floor with water feature and firepit.

Seven Grand was our first stop on Friday night. What a cool spot! We love a good whiskey bar and this did not disappoint. I mean, anywhere with a whiskey bible on hand is pretty promising. Though, I must admit we were a bit surprised that they were out of stock on Angel's Envy Rye.

Next, we wandered over to La Cita for Punky Raggae madness. It's a great dive bar with a solid margarita. We were mislead, as there was no punk or raggae. Still, the margarita made the stop worthwhile and the patio was cool.

Frank discovered a new spot named the King Cigar Lounge. It is far superior to others we've frequented in the area. This place is bright, clean and has fantastic location to LA Live and the Staples Center. They offer public, private and patio lounges with a great selection of sticks.

No trip to LA is complete without pastrami from Langer's Deli. We were only one metro stop away so we went twice. I mean when it's good, it's good. It's an institution for a reason.

We found ourselves at Ritz Carlton's pool for the view, a cocktail and lack of a crowd. While Kings fans were gearing up for their home opener. It was nice of them to welcome us - Go Knights Go!

We also grabbed a scoop at Salt & Straw. A must whenever we are nearby. They are currently showcasing spooky flavors. All were better than expected. Although, I wasn't able to try the most interesting flavor with chocolate crickets and candied meal worms. I don't know if my allergen translates to a food allergy, but I figured it was best not to find out. The Coffee Bourbon is too hard for me to resist anyhow.

We took the Metro to Hollywood for dinner at Cleo. They have closed the Vegas location, much to our dismay, so we thought we'd get a fix. The menu varies a bit and the dishes we knew and loved didn't really deliver. It was not a loss, however. We loved the crispy cauliflower with blue cheese tahini and the eggplant chips!

We stopped at Lost Property for a night cap before returning back to the hotel. We had a date with old friends. El Camino, anyone?

Sunday was dedicated to sports. It was a shame, though, that bars at LA Live don't open until 10AM. They must hate money because it was a seriously missed opportunity. There were so many fans dressed up with nowhere to go. We thought we'd give Tom's Urban a try. Thankfully, they opened before the posted time of 11 o'clock. There are many TV's but we weren't too thrilled by the experience. We opted to find somewhere else at half time of the early games. We came upon Dublin's Irish Whiskey Pub. It was far more our speed. We were content the rest of the afternoon. Great beer and whiskey selection! The Shepard's Pie was pretty good too.

Hockey was the main event Sunday night. We had tickets at center ice. Not as many Knight's fans traveled for this game compared to others we've seen on the road, but we had a great time and we were thrilled to earn a win, kicking off a streak after some tough losses.

Monday, we ventured outside DTLA for some sights and fun. We took the Metro to Santa Monica. It's been more than decade since we've been so we figured it was time to revisit. I cannot recommend it. Though, we did enjoy a light lunch at Meat on Ocean. 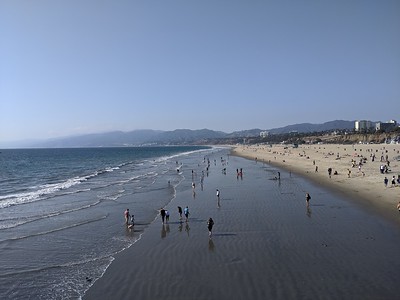 We bailed after grabbing a bite. We called a Lyft to El Segundo. Sometime you should just stick to what you know & love. I dropped Frank off at daycare - teehee - and made my way to Sausal. Which has become tradition. 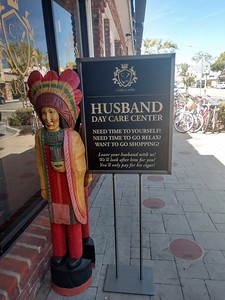 After a margarita and fish taco, I felt a bang-bang was in order. Any Louie CK fans, remain? It was a great episode that introduced me to the gloriousness of a double dinner. After settling my Mexican cravings I walked over to the Slice and Pint. We discovered it on a previous trip. They play good tunes, serve up tasty slices and offer an impressive tap list. As they should, since they are also the folks behind El Segundo Brewing. I knew I made the right choice immediately upon seeing this sign.

Talk about Oktoberfest dreams coming true. I washed down the amazing slice, with a banana wheat hefeweizen. 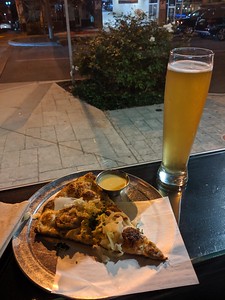 It was the perfect end to a fantastic trip.