What a long, strange trip it's been! I said to myself, and it was only January 16. This year has had a rather bizarre start. If it's any sign of what's to come in 2020; the only certain thing is to expect the unexpected.

January 2, I went for my annual exam. All was routine until my doctor felt a lump in my right breast. I left with a referral for an ultrasound and mammogram. The next day, I scheduled the tests for Jan 15. I was sure it was nothing, but I'd be lying if I didn't admit I was a tad nervous. Things have been so good.... I know life has an ebb and flow; nothing lasts forever. The good, the bad, it is all temporary. Most days are somewhere in between. I didn't stress, but it was definitely in the back of my mind.

I'm turning 40 this year so I've not had a mammogram previously. I intentionally did zero research, I did not want to be anxious over it. The technician explained that she'd take a few slides, send them to radiology for review, and then, I'd likely be sent on my way; and the ultrasound might not be necessary. The positions are awkward especially since I'm not blessed in the chest, but it wasn't as painful as my mom had made it sound many moons ago. Perhaps technology has improved things?

I was set to the waiting room while radiology got familiar with my girls. I was brought back in for a better look and more detailed shots in specific areas. Then, I was shuffled over to ultrasound.

I'm told to lay on the table; they'll take a few snapshots - easy peasy. She stopped in her tracks and said she'd return; she needed to send slides to radiology for review. Left alone in the room, chilled and exposed it was hard not to think the worst. I mean both scenarios did not go as easy as explained. I'm sure it's nothing... But doesn't everyone have that pep talk in this position? Shit. Plus, there is family history. I decide there and then whatever it is, is beyond my control, and I'll take it as it comes.

The ultrasound technician returns and takes several more photos and dials into a specific area she listens, records and collects more snapshots. Finally, I'm free to go and I'm told to contact my doctor in 48 hours. I left feeling more concerned than when I entered, but at least I knew they were thorough.

My heart sank when the doctor's office called the next day. Why so soon?! "Do you have a moment to discuss your test results?" Uh huh... I take deep breath; and her words came so slowly, it felt like eternity. "Your scans had no change." Wait. Huh? This was my first time! There's nothing to compare it to, no change from what? "Oh, I'm sorry. It was clear." Are you sure? I question. "Yes," I'm told. I confirmed some details to be sure.

I hung up the phone and let out a sigh of relief. It's not lost on me that every day hundreds of people receive the same call, without the all clear. I know how lucky I am.

Thanks to legislation passed by advocacy groups I learned by letter sent to my home that I have heterogeneously dense breast tissue. This means it is more difficult to detect cancer. A mammogram alone is not an effective screening. Those affected by dense tissue have a higher risk of cancer. I am fortunate to live in a state that requires notice be sent. Otherwise, I would never have known. I had never heard of such a thing. Joys of nearing 40, I suppose.

On lighter note, there was the whole firing of Coach Gallant. I am still stunned. I come from Chicago, we lose for years and accept it. This was a four game losing streak!

My initial reaction when Frank shared the news was damn! they mean business! I thought it was shitty to fire them on the road like Gallant experienced before with the Panthers. I did not learn until later that he was being replaced by Boer. I mean... EW! Why our rival?! And the Sharks fired him, why do we want him?! Man, I hope I eat those words. I'm currently processing the stages of grief. The only silver lining I can find is the day we beat the Sharks in the fortress with their former coach or later this season we are lifting the Stanley Cup or at the very least gaining bonus hockey. I don't know the sport without the post season. I like hockey beyond March! Last year was a hard enough pill to swallow.

I have a long way to go before I reach acceptance.

Oh, and there's also the fact that my sister is currently providing foster care for an adorable little girl that is 2.5 years old. That's a story for another day. In the meantime, we are taking it as it comes and expecting the unexpected. I am very thankful for good health and life's blessings. Thanks for the mems, Coach Gallant.

For several years, now, I've chosen a word to guide me through the unwritten chapters of the new year.

Thrive was the theme for 2019. That's just what we did. It was a year of great successes, wonderful memories; and, of course, we traveled a bunch. Most of my yearly recaps also include best bites, but we did not try too many new places. We mostly frequented old haunts, but we had to say goodbye, to yet, another favorite; R.I.P. Cleo (SLS). Though, honorable mentions go to newcomers, Kame and Best Friend. However, the best meal of the year is awarded to Sparrow + Wolf. We dined with a group and ordered nearly the entire menu to split among us. No one left hungry or disappointed. It was outstanding. The bread alone is glorious! 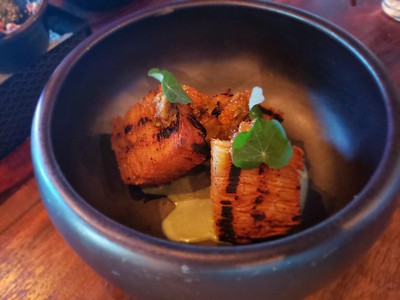 Our travels took us to California multiple times (Los Angeles, San Diego, San Francisco and Sonoma). No year is complete without a trip to Tijuana, I mean... Tacos are life. We also gallivanted around our old stomping grounds in the Riviera Maya by playing tour guide to our friends and Frank's family. We also explored new cities like Mérida and Valladolid. We returned to London and Frankfurt, and we wandered Stockholm and Amsterdam. And I roamed Paris. We were warmly welcomed in Fort McMurray. Traversed cities that feel like going home because we have visited so often, such as Austin, Boston, Denver and Phoenix. Then, there is Chicago, our first home. Plus, I can't forget the trip with my family to Netarts on the Oregon Coast. For anyone keeping tally, my travels spanned eight countries, seven states and countless cities. Frank exceeded those numbers crisscrossing the Midwest and east coast. Needless to say we logged many miles. It's a big world, I'm determined to see it. We've only begun to scratch the surface.

Which leads to my word for 2020... Explore. It's time to turn dreams into plans.

How about you, do you choose a word to set the tone for the year to come?

Posted by Kellee at 4:00 AM No comments: