Towards the end of our trip we sought adventure. We tried to snorkel at our hotel but the waves made it impossible. It's still a beautiful sight.

I knew Akumal Bay has calm water much of the time so we drove over to snorkel. We borrowed gear from our hotel, but rented life jackets at the dive shop at the urging of the conservationists (heavily suggested to protect the coral). I never thought much about it previously, but we loved that there was no need to tread water. It made the day leisurely rather than exhausting. It was a lengthy swim out to the coral, but it was worth the effort. The sealife was beautiful and plentiful. I wish I had photos to share, but this next photo was the only one taken that day.

It was the photo that killed my Canon Powershot D10. I've taken the camera in the water hundreds of times without issue, but it seems this time the door to the battery compartment hadn't sealed tight. Moisture quickly filled the camera. I managed to get one shot before it fried. I was completely bummed that I wouldn't be able to capture any of the amazing fish we saw.
The following day we went back to Akumal but this time we snorkeled in Yal-Ku Lagoon. This place is a real gem. It is a spring fed by Cenotes (freshwater underground rivers), the freshwater mixes with sea water from Yal-ku's inlet to the sea and it has the most amazing display of tropical fish. The freshwater is crystal clear and the seawater is a bit murky, the inlet currents are incredibly strong and the cenote waters are quite cool. It's quite the experience. We snorkeled for hours. It was the most amazing excursion we've done to date.
I learned schools of fish are fun to watch in fish tanks, but I don't like being surrounded by them. Those little buggers freaked me out. They would nibble on you too, if given the chance. It was wild seeing needle nose gars in their natural habitat. We kept them as pets a few years back. I also learned I'll never dive. You see, just snorkeling into large rocks made me claustophobic. Panic set in immediately. Fortunately, I was able to get my head above water in a hurry (diving wouldn't allow that - so, it is completely out of the question). I'm happy to report, I didn't let it get the best of me. I calmed down and tried again. I was able to see there was no reason to be concerned. I snorkeled the tighest of spots without issue. Kellee 1, Claustophobia 0.
The next day, we went to the Cristalino cenote. By now, I was sunkissed sunscorched so I knew there would be no snorkeling for me - my butt was badly burned. Frank wanted to check it out. He was second guessing when he felt the cool water, but he took the plunge and eventually got used to the chill. This cenote is surrounded by jungle and mangroves. The fish are mainly small. They're known for giving a nice pedicure. The underwater caves are the sight to see. I understand divers can actually get to cenote Azul from here. Wild.

Puerto Aventuras is nearest to our hotel. We travel here often for trips to the Chedraui. We'd stock up on cigars, cerveza and pastries. It was quite a bit cheaper than Walmart and the Soriana at the Centro Maya. We decided to see what was behind the gates and it's lovely community catering to tourists. It reminded me of Summerlin. This area is probably most popular for swimming with the dolphins. The were a sight to see.

Back at the hotel we enjoyed our encounters with inhabitants. There was Estaban our guard iguana. He loved to sunbathe outside our door. 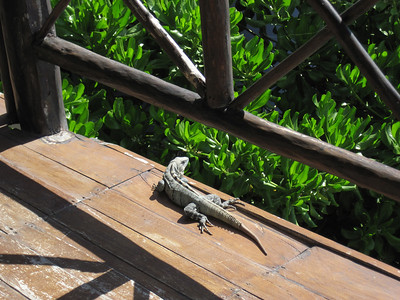 There was crabby and herman the hermit crab

The birds dining at sunrise were a trip to watch

All in all, Al Cielo in Xpu-ha is our slice of heaven. I cannot wait to return.

Posted by Kellee at 3:08 PM No comments:

While visiting Xpu-ha, Mexico our goal was to unwind. Our only plans were to relax on the beach and enjoy local eats. It was a great success. We spent a great deal of time in our palapa reading, listening to music and drinking cerveza while the ocean breeze kept us cool.

When we felt adventurous we'd run into the warm caribbean sea and play in the waves for hours.

We'd work up a hunger and we'd drive to Playa Del Carmen or Puerto Aventuras for dinner. We enjoyed meals at our favorites like La Cueva Del Chango and El Fogon. We also found delicious Italian at Massimo. It was quite odd to order Italian dishes in Spanish. I never thought I'd enjoy Italian in Mexico, but we did. So much so we ate there twice. Once to enjoy pasta and again to sample their pizza. Both were excellent! And One lazy night we stayed at the hotel and enjoyed a wonderful meal.
La Cueva del Chango: Bean Soup, Chicken Chilaquiles and Sopes 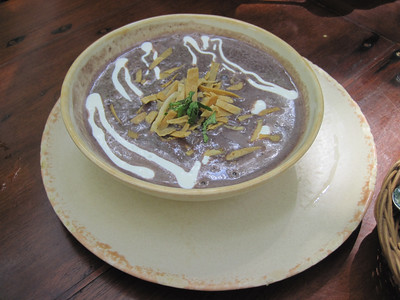 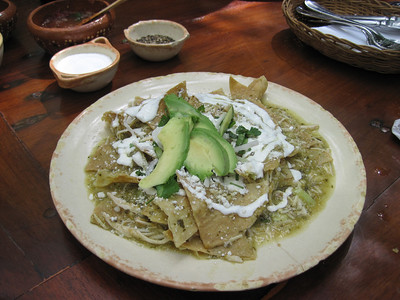 El Fogon: Tacos Al Pastor & Margarita, and us perched above the streets of PDC. 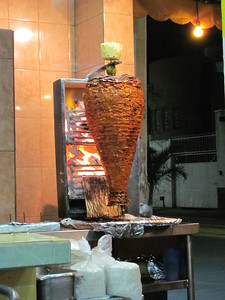 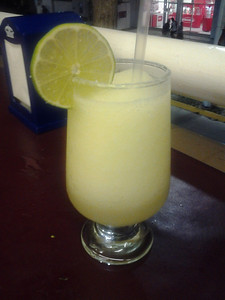 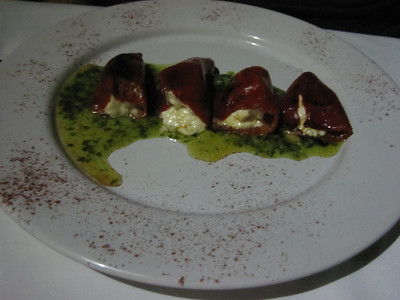 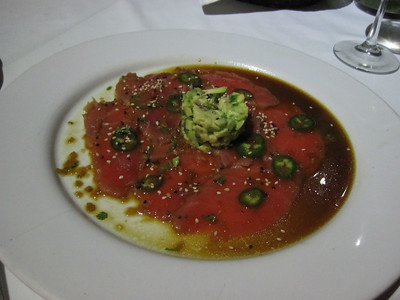 We enjoyed Sunrise and sunset! 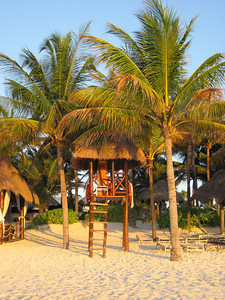 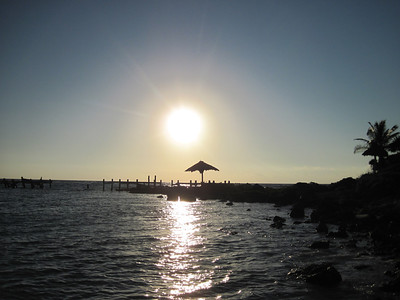 There is more to come.

We're only two weeks away from the Spring Restaurant Week! Eight days of gluttony begins on March 8 and runs thru March 15. We'll be limited to five dinners since we'll be out of town over the weekend. Three Square revealed the participating restaurant menus today. There are several new additions and quite a few favorites missing. Perhaps, they'll be added as the event nears?
So far the following restaurants have piqued my interest:
Aquaknox
Joe’s Stone Crab
Poppy Den
Table 34
Tommy Bahama
We dined at Aquaknox and Joe's before, the others would be new to us. Poppy Den is just new in general, I've been anxious to get over to Tivoli Village to give it a try. This is the perfect excuse. I'll be counting down the days.

Posted by Kellee at 1:37 PM No comments:

I have no idea how there could be only eight days left in the month. Furthermore, I cannot believe it's been 3 weeks since I've posted. It seems this month will clip by at record pace. Even January flew by and I didn't travel at all. Frank did enough for both of us. He was in Cleveland for work for two weeks and Chicago for a week visiting his family. When February rolled around I was very happy to have him home and it was a comfort to know travels this month would be done together. We just had to get past Superbowl. He worked around the clock finally coming home around ten o'clock Superbowl Sunday. Then, finally, it was sweet vacation. We had a 6AM flight to Cancun with a connection in Houston. We stayed a week at Al Cielo hotel. We love the hotel and Xpu-ha beach so we return again and again. This time did not disappoint. In fact, I'd say it was the best yet. We were reluctant (me more, than Frank) to return home, but we knew there was more fun to be had. Getting back to the grind would be worthwhile.

This past weekend I had three days off, thanks to President's Day. I kicked off the weekend with girlfriends, we went to Firefly for dinner before seeing P!nk at Mandalay Bay for the Truth About Love Tour. I've never seen a show quite like it. I was totally blown away! If you ever considered going to one of her shows - Do it!
Then, Saturday we went down to Laughlin for two nights. Laughlin is always good fun. This time was no different. We drove down to Needles, CA on Sunday to meetup with co-workers that were camping at Pirate Cove. We brought the RZR down to go off-roading. It's a great set up for camping. The trails are better for quads and dirtbikes so I don't see us returning... but now, we know. Before leaving Laughlin Frank and I played Keno. I was feeling our numbers so we bought 21 games @ 1.75 each. We kept hitting 2 or 3 of our numbers, but after the 17th game we won our four spot, 4 1 9 7 came in! Cashed the ticket for $386 when the games were through. I was pleased.
This weekend were staying at Estancia La Jolla Hotel & Spa. We love La Jolla, but this is our first time staying there. The hotel looks really nice. We got a great deal booking a Travelzoo deal. I'm very excited to head back to San Diego. It's my favorite home away from home.
We'll catch a slight breather before going to Phoenix the second week of March for White Sox Spring Training and offroading. Then, Frank will work around the clock for March Madness. We'll have a visit from my sister and Nicky just after my birthday. I'm very much looking forward to spending time with them. Mid-April we're off to San Francisco, the last weekend we have friends visiting and I am taking my mom to see Tim & Faith for her birthday. Then, in May, we are heading to LA to see the White Sox and then to San Antonio to see the sights. I suspect it'll be June before I know it. I'll work to find time to resume a normal schedule around here.

Posted by Kellee at 1:58 PM No comments: