For months now, I've been contemplating dying my hair. The grays had gotten out of control and I couldn't stand it. I've never dyed my hair. I've been a natural redhead for life, however, my hair has faded over the last decade and it's become more golden than copper. Coupled with the grays, it was dull. I was ready for some oomph, only I was terrified to go through with it.

I've seen so many bad bottle jobs, I knew going to a professional was my only choice. Still, I was terrified to put my trust in someone. Then, a friend recommended her hair dresser. I took a leap of faith and made an appt. Boy was I anxious, excited and scared leading up to the appt. I tried to calm my nerves by reminding myself thousand of women dye their hair regularly, it was no big deal. But it was my first time, so it was a big deal.

Saturday was the big day. I arrived at the Euphoria Salon at Town Square at 11:00. I hoped my nerves would settle, but I only got more anxious. Am I ridiculous or what? I met my girl, she was cute and friendly. I felt a little relief. She asked what I wanted, told her I wasn't sure, but I didn't want to look like a bottle redhead and I wanted more oomph but wanted to stay natural. Told her it was my first time and I was nervous. Before I could finish she said she had just the color and she was so excited, which put me at ease. When I saw the color all mixed up it had a purplish hue and it got me a bit anxious, but I trusted her. After she rinsed me I got a look of it wet and it was wild, it was like looking in the mirror a decade ago. She went to work blow drying and styling it. Finally, she whipped me around and I got a look. I was very happy. It was a huge relief. It was my hair color with boost. She added copper back to my color, and it worked, it was like a flashback of my younger self. She gave me a big hug and thanked me for letting her be my first.

I should have taken before & after photos, that would have been fun. I should have taken a photo on Saturday when it was freshly done, but never thought of that either. Instead, I remembered on Sunday. Not the most flattering self-pic, but it shows my new color. Which is totally me, just my hair color as a teen. So wild, I tell you. I'm thrilled I went through with it. 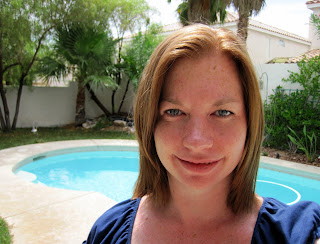 So back to Saturday...

I met Shane and Frank for lunch at Amore. Frank was really impressed, they both liked it and couldn't believe how straight it was. Then, Frank was staring, he said it looked like a wig. A bad one? No, no, a good one, it's so shiny, straight and soft looking... It looks really great. Phew.

After yummy pizza, we dashed over to Town Square to catch Inception at Rave. Great premise, it had potential, but I thought it fell flat. In the end it was predicable and it dragged. Frank liked it more than I did. Shane was indifferent.

Next, we picked up Frank's cousin's boyfriend. Then we all went to the Putt Park for cosmic mini-golf. The guys made bets for the winner and closest to the whole, my foot served as the unit of measure. Shane won. I was kicking ass the first 9, but the back 9 killed my game. Lots of fun and laughs were had.

Back at the house we started playing LRC for quarters and tossing back beers. Darren's brother came by and Lauren arrived shortly after. We played cards and LRC. Made margaritas and had shots of Patron. Then, we played drunk Taboo. It's much different game when you've been drinking. So flipping funny! I was in tears, which made them all laugh harder. Which got me laughing harder and crying harder. Such a riot. Lauren crashed and we continued to play cards. About 1, we needed food and beer. We never had dinner, gotta love being a few blocks from In-N-Out. Ate and played more cards. About 3, I was done. I needed sleep. I said good night. Not long after Darren's brother left. Lauren went home leaving Darren behind and the guys went to Orleans for blackjack, tables weren't cheap enough so they went to Wild Wild West. It's a dump, but they had fun. They stayed up all night and came in about 6am with Dee's donuts. Two hours after Frank came to bed, I was up. Too funny. I cleaned up from the night before and the guys were back among the land of the living by noon.
Posted by Kellee at 9:48 AM