Another two bite the dust

Last night was a dud of an evening, at least in regards to food. First of all, dinner was planned for BJ's Brewhouse. We used to frequent the Charleston location fairly often, but they made some menu changes. As a result, or coincidence, we haven't been too pleased on the last two occasions. Last week they sent me an email to come in for a tasting menu and beer pairing sponsored by Widmer Brothers. We were willing to give them another chance, I made a reservation. Upon arrival, they found our reservation and told us we'd be seated promptly. We were, but it was in the main dining area. We we under the impression this would be some sort of special event. We brought it up to our server when he arrived. He apologized and pointed to where we should be. We headed back to the hostess desk to explain the mix up, more confusion followed, but finally we were led to our table. We were informed two others would be joining us since the table seats four. It was the final straw. We were looking for a nice night with a decent meal and good beer. We were in the mood to be social, especially after all the hassle. We hadn't even started the meal and it was off to a bad start so we took everything as a sign and we bailed.

Frank suggested we go to Create. It's a burger joint, I've been meaning to try. I was game. Then, he remember about John Cutter. It's a VP Bar & Restaurant on West Charleston. We've dined there a bunch, but it had been ages since we stopped in. John Cutter won since it was closer - we were really hungry. Noticed right away that they changed their menu, without proof-reading it - we pointed out spelling errors, they were aware. I like their Philly and it was still on the menu so my selection was an easy one. Frank's Krolly sandwich got the boot so he tried the chicken sandwich and he ordered dynamite rolls to start. 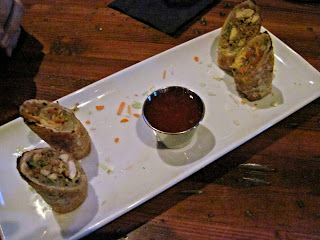 The rolls weren't exactly dynamite, they were terribly dry on their own. The sauce helped a lot. 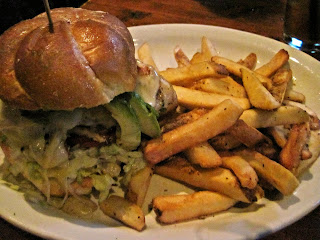 Frank's sandwich was no better. Dry was the word of the day. He slathered it in ranch dressing to make it edible. Good news is the French fries are still tasty. 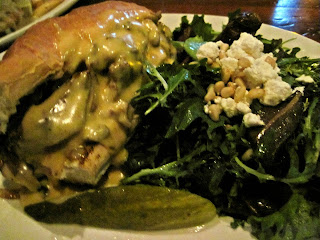 My Philly was a disaster. The meat was tough, the bread was dense and stale; it was dripping with cheez-whiz and it still found a way to be ridiculously dry. The salad used to be a favorite, they had a great champagne vinaigrette. Not no more. It was bland and way under-dressed. That's a complaint I never thought I'd utter. I use very little dressing.

Previously, we've had issues with service at John Cutter. Last night, service was great so I do give our server props. However, the kitchen was just dreadful. I can forgive bad service, but I cannot forgive bad food. John Cutter has bit the dust. While, we're at it, I think it's safe to say BJ's has, as well.

Old favorites tend to wane. We've experienced that time and time again with restaurants near home. The upside is that it encourages us to branch out and try new eateries.
Posted by Kellee at 11:12 AM