After dotting all the i's and crossing t's at the dealership, we drove over to the nearby SmashBurger for a bite. I've heard mixed reviews about the place so I knew I'd have to see for myself.

SmashBurger started in Denver. Locations are all over, but not many on the eastcoast, mainly west, midwest,... texas has a bunch.

Menu boards are on the wall, you walk up and place your order. You're given a number and you take a seat. Later, your food is delivered. 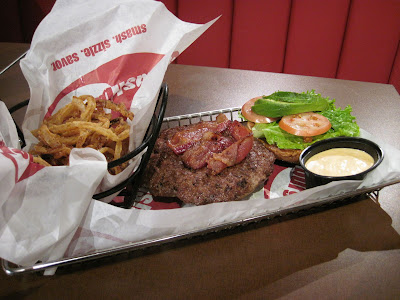 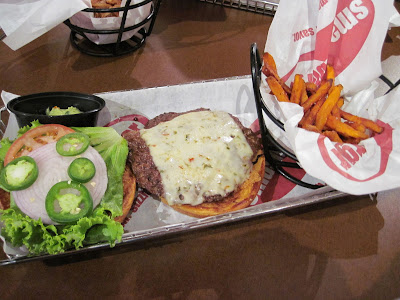 Frank's burger and bun were far better than mine. My bun was dry, the meat was flavorless and the only taste that stood out was the chipotle mayo. Even that wasn't very good. My burger was a complete flop. My sweet potato fries were no better. They were limp, greasy and practically inedible. Frank definitely made the better choice, his bun was pretty good, and his burger was juicier than mine. His haystack was overly greasy.

The tab was $20, I'd much rather have Fuddruckers. They're far better and you get more for less.
Posted by Kellee at 1:03 PM