Ever see a duck soar? Well, here you go. 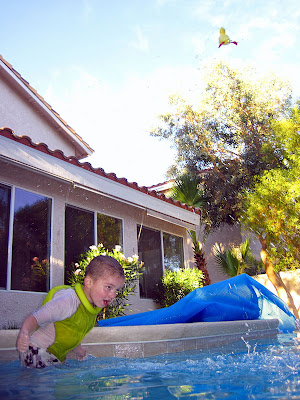 It was SO GOOD to see Amy and Nicky. They were at the house with my mom when I got home from work. Nicky was hiding under the kitchen table. They tried to tell me he missed the plane. He surprised me, and we exchanged a big hug. Then he pulled me around asking a hundred questions. He was quite perturbed that my cooking frog was gone. It was a lawn decoration the previous owners left behind, it had gotten old and cruddy so we threw him away. I never knew it made such an impression on him.

We played a little frisbee golf, then he had me sit--top stair, Auntie Kellee... by me. He's grown more. Looks even more boyish. And he has the cutest freckles on his cheeks. He calls them angel kisses. Amy said when he finds a new one, he says Grandma Rose visited me last night. Very sweet. The ice cream man came. Mom bought us all ice cream. Nicky was hysterical with his excitement. We all ate our ice cream in the backyard. Nicky wanted to check on the fish in the pond. He tried to catch one and nearly fell in in the process. He told me, "get it, get it! Auntie Kel! I want to touch it". "No way!", I said. I told him to name the fish. He said he needs to hold them to give them names. Not a chance. He then relented and named them Symbol. All of them.

He convinced me to swim. Frank heated the pool to 83. It was still damn cold. I froze. I sucked it up best I could. I think there was a 10 minute window where I got used to it after the initial chill, but then the chills set back in. Nicky swims really well, and has no fear about going under. It was really wonderful to see he's still a fish. Frank got home and swam with Nicky. They had fun making big splashes. Mom rested, Amy and I prepped dinner. Frank grilled, Nicky and grammy played while Amy and I got salad together. Rosemary ranch kabobs, greek salad and garlic bread for dinner. Tasty.

We played some more after we ate. Then, Frank and I took Amy to Sahara for $1 Blackjack. Mom stayed home with Nicky. Amy's first hand was a blackjack. Too bad she only bet a dollar. We played a couple hours, she and I lost $20; Frank lost $50. Drank a couple beers while playing, earned free play from the current blackjack promotion, played that, lost and came home. Nicky and grammy were both passed out. It was fun to have Amy at the tables and share a drink with her legally. Wild to think my little sister is old enough, though. When we got home, she finished Nicky's juice box. Seeing that reminded me she'll be my little sister forever.
Posted by Kellee at 2:53 PM