Last night I met Frank at Bellagio for our 7 o'clock reservation at Michael Mina. We were seated in the farthest corner of the restaurant, there is a small room next to the main dining room, we were in there. It was peaceful, you'd never guess you were a couple hundred feet from the craziness in the Conservatory.

We were started with an amuse-bouche of watermelon topped with red onion, feta and balsamic vinegar. It was clean and refreshing. 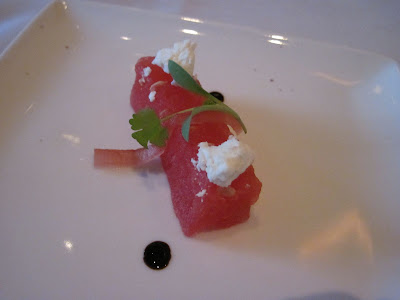 Then, we were offered breads: Italian and sourdough, both were warm and fresh. I preferred the Italian. After noshing on breads, we were brought our appetizers. Frank had bibb lettuce salad with Maytag Blue Cheese, Summer Corn, Bacon, Red Wine Vinaigrette. It was fresh and delicious, the vinaigrette was fantastic. I had the Heirloom Tomatoes Gazpacho with Spiced Crab Salad, Avocado, Summer Herbs. It was like biting into a fresh tomato only I was slurping it off a spoon. Yum. The crab salad was excellent, too. 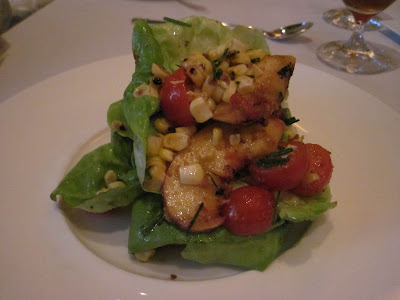 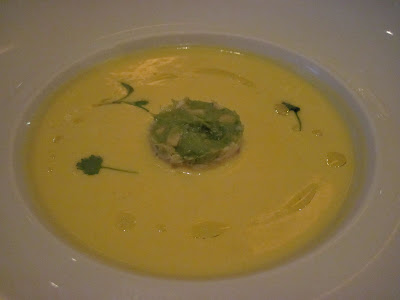 When it came to the entree I was torn, I planned to order the halibut which sounded fantastic, but the Lobster Pot Pie that Michael Mina is famous for was included on the Restaurant Week menu for a $30 supplement. Regular price for this dish is $78, this meant I'd get it plus a starter and dessert for $80.10. It sounds like a no brainer, but I've never been a fan of lobster. I tend to find the chewy texture off-putting, but on the other hand there was no better place for me to try it. Frank left it to the fate of eenie meenie miney mo and the winner was the lobster pot pie. I did not regret it. It was superb. I prefer the lobster claw to the rest of it, but overall it was very tasty. The brandied cream sauce was lush and velvety. It's really a beautifully composed dish, I'm happy I experienced it. 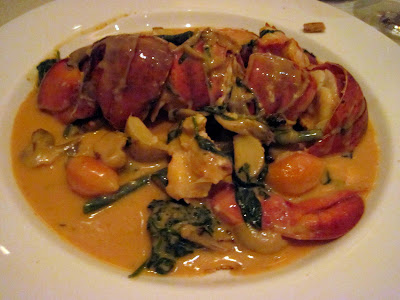 Frank ordered a filet that was splendidly prepared it was one of the tastiest I've had in quite sometime, it was served with a short rib cottage pie, like shepards pie, with short rib, carmelized onions and whipped mashed potatoes. It was warm and comforting, not too mention delicious. 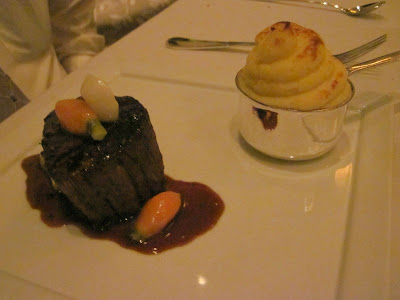 By some miracle we still had room for dessert. Frank had Michael's Root Beer Float with Sassafras Ice Cream, Root Beer Sorbet, and Warm Chocolate Chip Pecan Cookies. The float was pretty good, but the cookies, oh! the sweet heavenly cookies were the star. They would've been perfect served with a glass of cold milk for dipping. I had the Summer Blackberries over Caramelized Brioche and Cinnamon Toast Ice Cream. Eh, it wasn't very special. Neither the brioche or ice cream were a success. Thankfully, I have a dear husband who kindly shared his heavenly cookies. 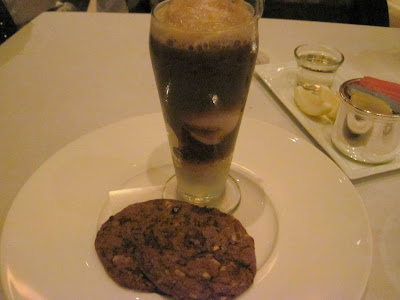 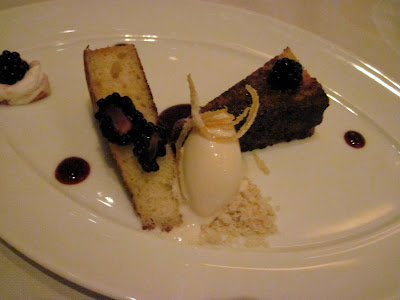 After dinner, the manager came by to check on us. We chatted a bit, mainly gushing how much we love Michael Mina's restaurants. He returned and poured us each a glass of a nice dessert wine. I don't recall what it was, but it was not cloyingly sweet like most dessert wines. We both really enjoyed it. Then, finally to end the meal our server delivered a plate of small treats with the check. The coconut macaroons and shortbread cookies were simply wonderful, as was the entire meal. The food, the service, it was all stellar. Michael Mina saved Restaurant Week.
Posted by Kellee at 11:24 AM