We woke Sunday, giving NYC a chance to grow on us. We headed to Nolita to try Lombardi’s and a sandwich shop. The latter was closed. Lombardi’s was our sole destination. We grabbed beers at the bar. Frank had some cream ale, and I had Yuengling, my new found favorite. We were seated in the basement. We looked around and saw that the Margherita and White pizzas were popular. Majority ruled, and we got half & half, too. 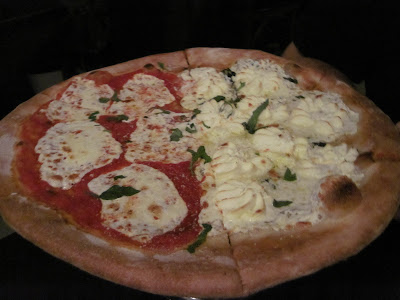 The white pizza was not very good. The crust couldn’t hold the ricotta and I thought the ricotta was overpowering, you couldn't taste anything else. The Margherita, on the other hand, was good. It could have been better if it had a crisper crust.

Next, we sought out Cheesecake. Rice to Riches turned up in a search, it was close by, and we walked over. Only to find it is a Rice Pudding shop. They only had cheesecake flavored rice pudding. I’ve never liked rice pudding so we left and tried Eileen’s Special Cheesecake instead. 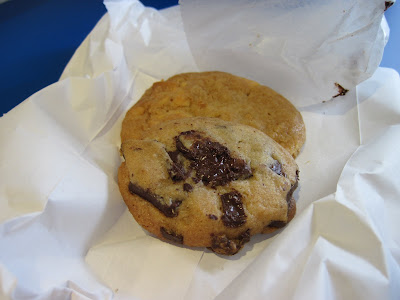 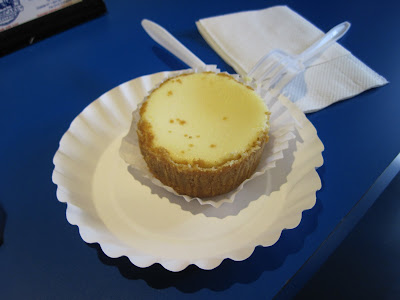 Frank got a small cheesecake and a few cookies (3 were cheaper than 1). It was a bit pricey, but very good. The cheesecake was light and fluffy and not overly sweet. We liked the peanut butter and chocolate chip cookies best, the white chocolate macadamia nut was dry and cloying.

We thought we’d check out MoMA next. We searched for directions; unknowingly Google led us to the MoMa design store in SoHo. We came across Dean & DeLuca, and Balthazar so I thought it could be a happy accident. Frank loves French onion soup and I thought we could grab a bowl at Balthazar. There was a line just to wait to be seated. We tried to find seats at the bar, but struck out. We explained that we were only looking to grab soup and run. They seemed like they were going to work something out for us, but instead the put us aside and had us waiting for a table to become available. There was no way we were waiting 40 minutes for soup.

We left, and found directions to the actual MoMA museum. Ironically, it was directly across from Il Gattopardo, the Italian restaurant we dined a few nights earlier. Anyway, admission was included in our City Pass. The museum had some great pieces and some odd ones. 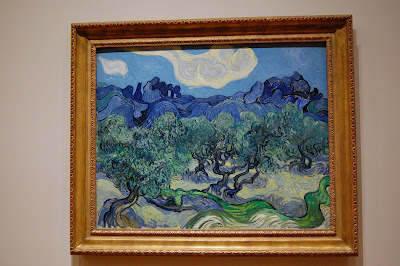 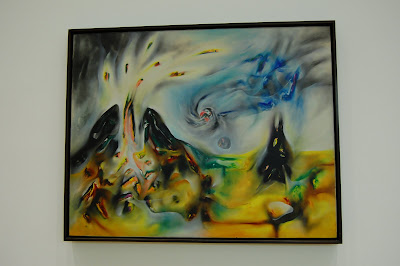 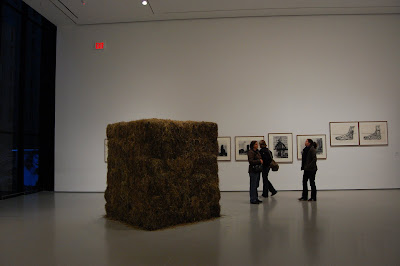 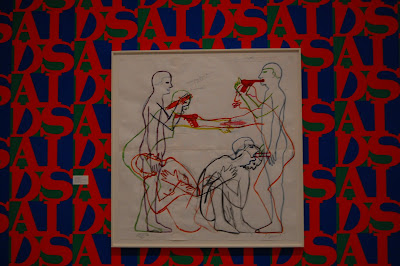 Overall, despite its larger size it reminded me of my experiences at the Art Institute in Chicago. Next, we were off to the Lower East Side, Katz’s Deli was our destination. It was mobbed, Frank waited in line why I secured us a table. He ordered corned beef reuben, corned beef sandwich and an order of potato pancakes. He only intended on the reuben, but there was confusion and he was left with both sandwiches. 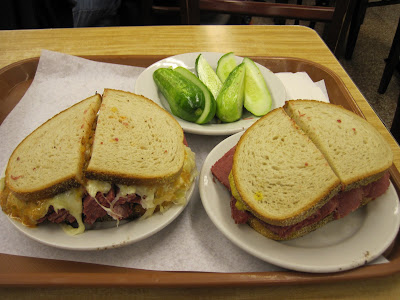 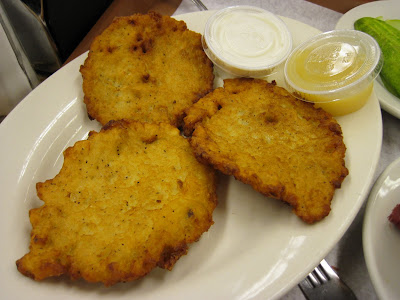 We weren’t terribly hungry but we polished it all off. Finally, we had a meal that met our expectations. We thought delis like Katz’s were on every corner. They are not, but finally we knew where to grab a yummy delicious bite. We felt like we had turned a page.

We had tickets to Charlie Sheen at 8:00pm so we rested back at the hotel a short bit before heading to Radio City Music Hall. The 20-minute ride to rest 30-minutes just to take another 15-minute ride seemed to make little sense, but we needed it. Radio City is a great venue. We suspected, even if Charlie was a train wreck, it would be a neat experience. And it was. Charlie was even amusing. The show could’ve been better if the audience asked better questions when they were given a chance to ask anything… Do you like Canada? C’mon, really? More lame questions followed. Charlie answered each one. He even gave a guy $100 when he asked for it. James Lipton and Darryl Strawberry were in attendance; both took the stage and asked a question. 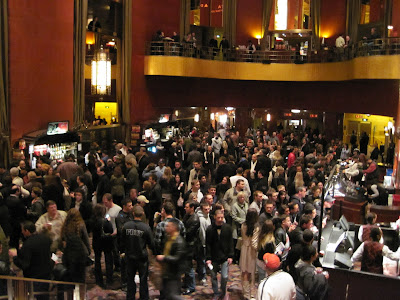 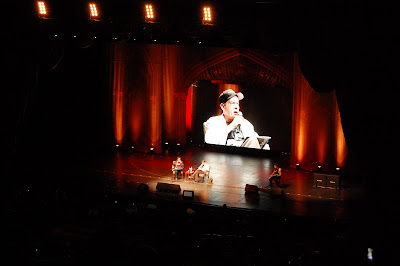 It wasn’t the greatest show ever, but it was better than he’s been given credit for. I’m happy we saw the show to form our own opinion, rather than those that are spewed as part of the media circus.

Frank wanted to try another Italian restaurant, we came upon Trattoria Trecolori. We hemmed and hawed a bit before entering, but we gave it a try. Frank ordered veal with eggplant and mozzarella and I had minestrone soup. 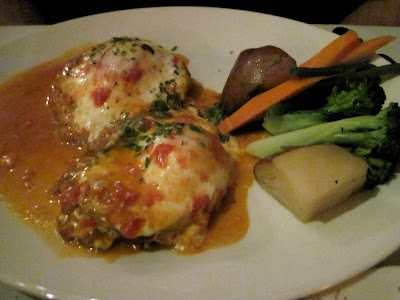 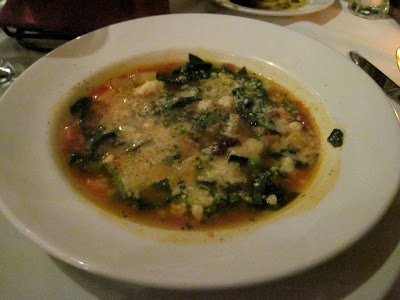 The veal was extremely tender; it was good, just under seasoned. My soup was different than minestrones I’ve had before (it had peas), it was decent, but not worth $8. After dinner, we walked over to Roxy's for cheesecake. Perplexed by the options Frank asked the hostess which flavor was her favorite, "Snickers" she said. 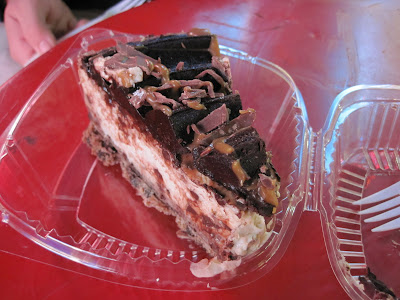 We got one expensive slice and did the touristy thing. We sat at the little red tables in Times Square and ate our cheesecake. It was good, better than we both expected. It left us wishing we had tried the original. Afterwards, we returned to the hotel to rest up for our last full day.
Posted by Kellee at 3:00 PM

That snickers cheeesecake looks, to me, delicious! I really dig that picture of the factory with it's lime green/yellow doors or accents...and the neon blue too - I think that looks really neat. Of course, I think that 'Buy American' sign painted into the Huxley Envelope company is classic American pride right there - very cool.

Can you tell us more about the ratings you'd see in the windows (A, B, C, pending). I'm not sure I know what/how/where these come from? Did I overlook something in a previous post? If so, mea culpa.

Bummer on the skunk beer...that's just wrong...Thanks for sharing the blow by blow!

Those photos you mentioned are among my favorites. I don't know what that building was, but it was in Hoboken, NJ.

The grades are issued by the Health Department. Las Vegas has them, too. If anything less than an A is received the restaurant can appeal, and try again for an A. Only, here, I can't recall any place that settles with a B or C. I'm a bit of a germ freak and food sanitation is important. I know how much can be overlooked to receive an A, I can't imagine kitchen conditions for places that earn anything less.

If I don't know, it's one thing, but when it's right there in your face. I can't knowingly eat in a place that isn't cleanly.