Tuesday, we had been in New York a week and we were ready to go home. Our flight out wasn’t until 5pm so we had time to spare. We gathered our stuff and took one last look around before checking out and storing our bags. 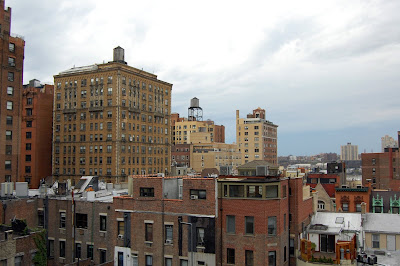 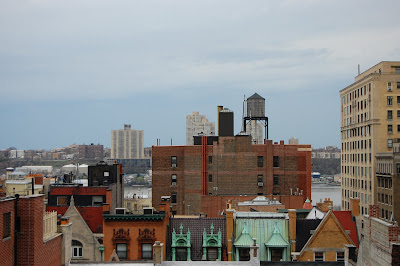 We planned for one last meal at Katz’s Deli, when we reached the subway we quickly learned that our Metrocards had expired. We had to load up more funds. The ride to Katz cost us $5 each. This made the unlimited pass seem like a deal of a lifetime. We definitely got our monies worth out of that. On the way to Katz’s Deli we stopped at Ray’s Original for one last slice. 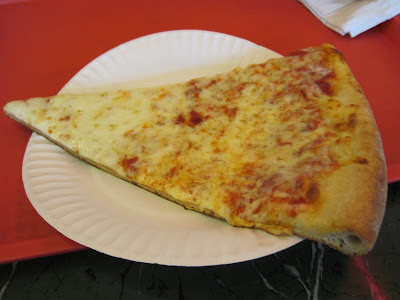 The crust was really good, it was crisp and chewy, it held the toppings, but it was the sauce that was the weak link. It had that cheap acidic tomato taste that I do not like one bit.

At Katz’s we ordered the three meat platter. Now, this was the way to go! We had corned beef, pastrami and salami. We made our own sandwiches. It was really good. 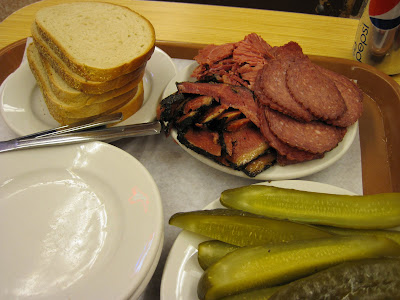 When we left Katz’s it began to pour, time to dig out the umbrella... We rode back to the UWS and went to the Natural History Museum. The entrance from the subway seemed convenient until we got stuck in a hellish line for tickets (this was the last admission included in our City Pass). The door man here was an even bigger dick than the one at Rockefeller Center. We waited eons but finally got our tickets for admission. We were told the Planetarium show would begin at 1:00. We weren’t too sure if we wanted to waste time with it, but we were urged to check it out “it’s really neat.” We went, I lasted about 3 minutes before falling asleep.

We wandered the museum a bit, but we were turned away at every interesting exhibit. Each one had an extra entrance fee. It was nutty. We walked through a couple areas we could view and it was plastic animals we’ve seen at San Diego zoo, replicas of ruins and other things we’ve experienced in Mexico. We were over it. Fortunately, the rain let up and we left to head over to Levain Bakery.

Levain Bakery is a small little place that could be easily missed if not specifically seeking it out. It has been featured on dozens of TV shows and it’s the most copycatted recipe I’ve seen on food blogs. I had to try the original myself. We got the classic chocolate chip walnut cookie and the dark chocolate peanut butter, and a big ole cup of milk to wash them down. 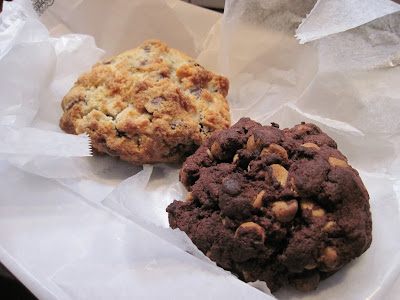 The fuss over these cookies is warranted. At $4 each they are pricey, but they are very good. The classic was my favorite. The dark chocolate was rich and chewy more like a brownie than a cookie, an outrageously delicious brownie.

Our time was up and fortunately we ended our trip on a good note. We walked back to the hotel to collect our bags and we hailed a cab to LaGuardia. It was worth every cent of the $40 fare. While sitting at the gate, we learned that our flight would be delayed. We had a short window to catch our connection in Baltimore so I was concerned that we wouldn’t make it. We began to search options… there were no more flights to LAS from BWI. If we missed our connection we would be stuck in Baltimore for the night. SW won’t put you up in a hotel so I called a friend to see if she’d mind having us. She was game even with the moment’s notice. That was awesome! I told her we’d check other options and I’d keep her posted with our plans. We frantically checked flights all over, searching for any that would get us home. We found one thru Chicago, it provided us with the best chance of making it home to sleep in our beds. Worst case, if we missed that connection, too, we had family nearby. Frank exchanged our tickets. I called Amy to say thanks, but no thanks. Then, we sat and waited another two hours for our flight to Chicago to depart. We made the right call; we would not have made it to Baltimore in time. We would’ve arrived 45 minutes after our flight left to LAS.

We boarded the plane to MDW. It was on time, thankfully. But then, we were stuck on the tarmac for nearly an hour. I’ve never experienced such a thing. I’ve since learned that it’s a common occurrence at LGA. I thought it was JFK that had those issues. Now, I know Newark provides your best chance for on-time arrivals/departures and with the train it is likely get you to your destination faster.

Our layover in Chicago was short and sweet. The flight had few passengers so we knew it’d be a roomy ride home. We didn’t except to score the first seats on the plane, but we did. Frank had so much leg room it could have been first class. Our plane touched down just before midnight. Our hearts were beating and our stomachs were a flutter just like our first trips out to Las Vegas. We were home. We cabbed it back to MGM. We enjoyed the warm air while we waited for our car at valet. Our car. Oh, how I missed thee. It was wonderful to travel above ground and ride without strangers. I’m no city girl, nor am I a country girl. I belong in the suburbs. No doubt about it. We were happy to experience New York City, but it never did grow on us.
Posted by Kellee at 1:02 PM