Thursday, I wish you were Friday too.

I'm happy to report we finally made our hotel reservations for New York City. Over the weekend we decided on staying on the Upper West Side. I was torn between two similarly priced hotels, but a deal on booking.com made the decision an easy one. I chose Hotel Belleclaire. We'll be a few blocks from the subway and central park. Zabar's is right around the corner, too. I think we'll be set. Now, that the hotel is squared away. I can focus on more important things... like food. Oh, and how we'll occupy the week. Whatever the plans are, it's good they'll include walking. We'll need the exercise to help burn all the extra calories we'll be gorging.

This weekend I'll get a preview. I will savor every bite in San Diego. Con Pane, La Puerta, Los Ponchos, Whisknladle... I've missed you so. We won't have much break between gorge fests in San Diego and Chicago, so I'm hopeful this weekend doesn't do too much damage. In Chicago, White Castles, Giordano's, Golden Palace Chinese and Greektown are calling. I'm ready to answer the call.

Our lighter meal creations, like vegitas, are good, but they simply don't compare. It's just means to an end -- A big fat tasty end, with all sorts of goodies, special treats that cannot be duplicated at home. Even if we weren't on the health kick. 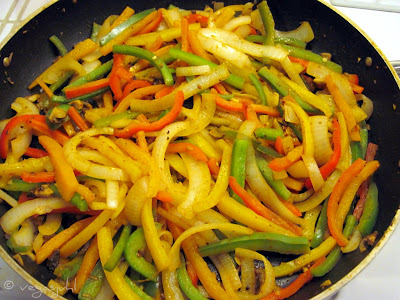 Sliced red and green bell peppers, hot house peppers, with jalapeno and sliced onion. Seasoned with taco seasoning and cooked down until tender. Toss it in a tortilla with your usual fixings. I actually prefer it plain. Frank likes his with sour cream and salsa.

Last night, to switch things up I made shrimp fajitas. I let sliced red and green bell pepper, jalapeno and onion cook down. Then removed the veggies from the pan, and added a little EVOO and minced garlic, tossed in the shrimp. Sprinkled them, with salt, pepper and chipotle pepper and added the juice of half a lime. I added the veggies back and let it all combine. Didn't snap a picture, but it came out well. It was a bit of a surprise. I haven't had much luck cooking shrimp in the past.
Posted by Kellee at 10:57 AM