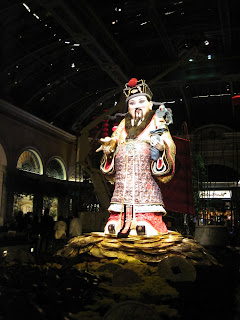 Welcome, year of the rabbit! Las Vegas goes all out for the holiday. It always stirs up fond memories from my childhood in Chicago. Most years the family would head down to Chicago's Chinatown to enjoy the street parades. We'd watch the dragons dance while the smell of gun powder filled the air from the belts of firecrackers that were lit. We'd grab a bite and inevitably find some trinket shop to buy Chinese handcuffs, fans and rice candy.

One year, I recall my grandparents joining in the festivities. I was probably about 5, maybe 6? I was as gullible as the day was long. My grandpa got a bowl of wonton soup and told me the wonton was a dragon's eyeball. I believed him. It was an easy sell. I can recall quivering as he chomped on his big bite of dragon eyeball. Eww! But I also thought it was heroic in the same way as child would admire a dragon slayer. From that day on, I wouldn't touch Chinese soup for fear it'd be swimming with dragon eyeballs. I think I was in my teens before I had hot & sour soup, and it was even later before I could stomach wonton soup. Which I love now, by the way. I understand why my grandpa was so eager to eat that dragon eye.

Two years ago, this month, my grandpa passed away from ear cancer. I'm happy to have days like today that make me recall those special moments shared. I could really go for a big 'ole bowl of dragon eyeball wor wonton soup. And some almond cookies. Definitely, the almond cookies. Later this month, they will be mine.
Posted by Kellee at 3:16 PM