Foodtrucks have become all the rage in Vegas, and elsewhere, apparently. The two major players here are Fukuburger and Slidin' Thru. They share their location via facebook and twitter and people track them down. Gotta love social media.

Well, Slidin' Thru started a schedule of their whereabouts. This was mighty helpful, I could final narrow down a time and place to check them out.

Last Friday they were behind Yogurtland on West Flamingo near the 215 from 6-9pm. 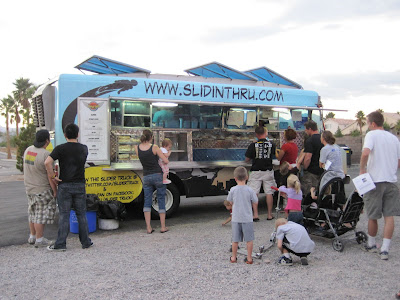 We got there promptly at 6 and we met a crowd waiting for these infamous sliders. The wait was about 35-minutes. Had we shown up closer to 7:00 we would've been better off the line was practically non-existent when we left.

We were greeted warmly when we placed our order, we each chose three sliders ($7) and we shared an order of sweet potato fries ($3). A short wait, later, we carried off our grub and we were anxious to dig in.

First up were the Barbie, Pep Pep and Yaya. The Yaya, with tzatziki and feta was our least favorite. The other two were quite good, but it was the Barbie, with carmelized jalapenos that we enjoyed most.

I like my sweet potato fries savory rather than sweet. So, it was unfortunate that the fries were dusted with cinnamon and sugar. 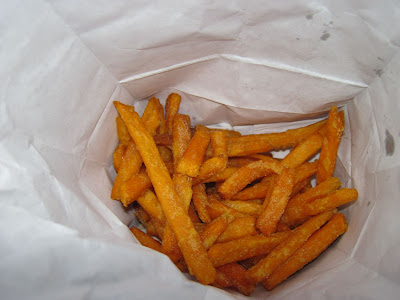 Next were the Captain's Order, Caprese and Pulled Porkie. 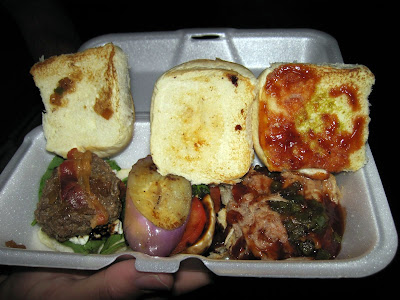 From these, we liked the Pulled Porkie best. The Caprese was a nice veggie option, but it would have been better if the eggplant was more tender. The balsamic on the Captain's Order overpowered the other flavors.

If I happen to be hungry and at the right place at the right time, I'd try Slidin' Thru again. Just not sure, that I'd take the time to track them down again and wait.
Posted by Kellee at 11:21 AM

Hmmmm....the fries look good, but I'm not sure about the sliders. I too wouldn't seek this out, but I guess some do (and will)?

Interesting concept though - I've seen something similar on TV about a cupcake van or something like that.

I know Food Network has a show Food Truck Wars, maybe? I heard people were working to nominate Slidin' Thru for the next season.

After growing up with White Castles other sliders pale in comparison. I keep trying, though.

I think we have 6 or 8 food trucks in Durham now. Every so often they all meet up at the Farmers Market :-) I like the Indian truck. It's an old school bus painted red.

that's fun that they're doing different cuisines. ours our limited to burgers.

Cinnamon/sugar on sweet potato fries? That sounds awful!
The sliders are definitely different. I love you showing pictures of the food.

Yeah, I'm not a fan of any sweetened version of sweet potato. It's totally unneccesary they're sweet enough on their own.