Last weekend, Golden Nugget was celebrating October Fest. Friday night had a $50 admission, we opted to go Saturday night when admission was free, but 200 beers and food were available for sale.

When Golden Nugget renovated and added the hotel tower, they should've expanded their parking garage, too. It's a nightmare to park there. We went around and around all the way to the top and it wasn't until we made our descent that a spot opened up. We happened to be backed up at the right place at the right time. The parade of cars around us must have been a little pissed.

The fest was at the pool, we walked over and there were two tents set up with bottles chilling on ice. It wasn't clear what was available, and beers were only sold by purchasing tickets. It wasn't what we were hoping for so we bailed. A pub crawl on Fremont sounded like a good alternative. We're familiar with all the bars under the canopy so we decided to stroll down East Fremont to see what's new. Much to our surprise, quite a bit! 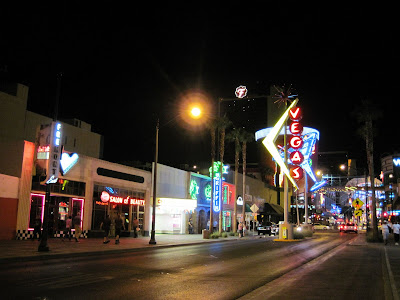 First there is a new hookah lounge, and then just past the cigar shop there is the Vanguard Lounge and The Beat Coffeehouse. We walked by the Vanguard and did a double take it had open air patio seating. We love this style of bars in San Diego, we've been saying Vegas could use them for years. Someone, finally, did more than talk about it... they did it, and right where it needs to be. I have no doubt it will liven up East Fremont. We had to give them business, we had the place to ourselves until an old friend of Frank's happened to walk by. He stopped in and enjoyed a drink with us. No drafts, only bottles, but prices are reasonable. We had a couple beers and a few people came in as it got a little later. Good to see. 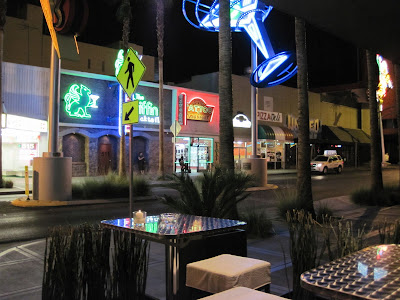 We continued on toward El Cortez and that's when we stumbled on the The Beat Coffeehouse. A coffeehouse with beer? That's my kind of place. They tricked us with taps, but they are still working out the details of their draft license. They had Kronenbourg in bottles so we stayed and chatted. The bartender was friendly, but she's had it with Vegas and looks forward to going elsewhere. That's a reality that's more common than ever before, but it's a shame to hear, nonetheless. Especially when I adore it so much. Anyway, the coffeehouse takes up the space of the old Fremont Clinic. The back rooms are used as art galleries. They were closed but we walked back to peek through the windows. I bet the place is really lively on First Friday.

We went to El Cortez next, it's a shame their fragrance is so strong I can never stay long. We were going to place football bets but we decided to go over to the Fremont instead. Packed house over there, but we were able to find seats in the racebook. Frank bet a few horses, I even bet one race. Two horse had Rock N Roll in the name. I had to try. Yeah, it was a sucker bet. I really can't recall ever winning a horse bet. Frank seems to think I did once, but I think he's mistaken. Sadly, my poor luck spilled over to my football parlay -- damn, Chargers.

When we left Fremont I was a bit tipsy and we were hungry. We considered staying on Fremont, but we knew our free parking would be expiring. So, Frank suggested a pitstop at In-N-out but I countered with Casa Don Juan. I cannot begin to tell you how well the tamales and carnitas hit the spot. We were practically on cloud nine walking out of there.

Our free parking was a joke. We ended up leaving 8 minutes too late. It cost us $2 to park. It doesn't break the bank. It was just obnoxious since we spent those eight minutes stuck in the garage in search of a place to park. It's such a horrible design it backs up all. the. time.

Oh. I almost forgot to mention the Downtown Ziplines. I thought they'd be open, but workers were hard pressed building the platforms while we were there. I heard it opened on Sunday evening. I planned to check it out, but after seeing it, I'd rather wait until they get a lengthier permanent structure. This is just a test on a temporary license, I suspect it will do well, however.

This is the launch platform, it on the east end of Fremont near Neonopolis. The ticket office is there, too. It was formerly the Streamline Tower sales office. 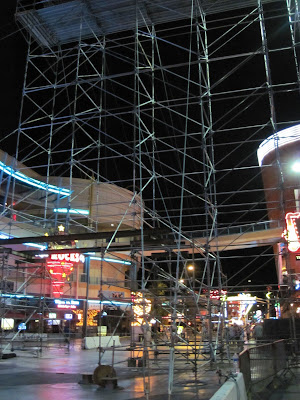