Yesterday we had an early mini-birthday party for Nick, he'll be four in November. We sang and ate Madhatter cupcakes. Yum! Then, it was off to the airport. Saying good-bye is never easy. This time was particularly tough. We had such a great time. Nicky is at my favorite age, I just adore him. I had lots of quality time with Amy, too. It sucks not knowing when I'll see them again. And the this was likely the last trip of this length. Amy will be working soon, and it won't be long before Nicky starts some form of school.

We created all sorts of memories this visit. We swam, ate ice cream from the ice cream man, went to the children's museum, played with the neighborhood kids, rode the tram at Bellagio, saw the conservatory and the sights at Crystals, ate Ghirardelli ice cream, visited me at work, attended the Las Vegas Locos football game, went off-roading, rode his horse Cha-Cha and played with animals at grammy's, played mini-golf, went to the Pahrump fair and Henderson car show, visited the town square park and cooled off in the splash pad, saw the Pacific ocean for the first time, played at the beach and took a whale tour, shopped at Ikea and fell for his kitchen, played hours and hours of cops, and made pizzelles. It was a good trip, indeed. 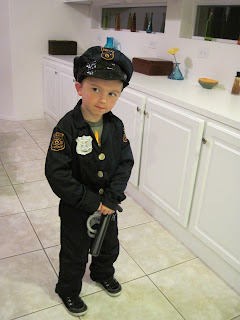 The boy's current obsession are cops, he loves the tv show and he loves to pretend he's officer Nicky. "We gotta move out" and find the bad guys. Those bad guys lurk around every corner, let me tell you. Seeing how much he was into it, I stopped at the Halloween store around the corner from the house and picked him up a policeman costume. It was worth every penny spent just to see him open that package. Wow! Cool! This is cool. So cool. He made it quite clear that it was very cool. He immediately put it on, it brought officer Nick to life. He just loved it. He practically wore it non-stop since I gave it to him. He's really too cute for words, see for yourself. He told me he'll miss me so much, I know he will, but I think I just might miss him and his mommy a bit more.

Amy and I had fun together, too. We got a few night's out. We gambled, had some drinks and, of course, enjoyed some eats. I sat beside her as she played her first hands of blackjack. I showed her how to play Keno. We had a girls' night out that started at the Hard Rock, we checked out the changes and Johnny Smalls see this week's LLV article for details, Vegas Values: The Hard Rock Rocks!. Afterwards, we headed downtown and played Bingo at the Plaza for a huge change of pace. We played some slots. I wished for black on the roulette wheel when she bet her last $6, but it was red. We shared tapas at Firefly. She doesn't share the same love as I do for artichoke toasts and sangria. That's ok, more for me. We had lots of laughs. Remembered some old times. Complained about aging. Above all, I just enjoyed her company no matter what we were doing. And I love to see her interact with Nick, she is a really great mom. She's raised the kindest, sweetest, smartest and most well-behaved little boy. I'm really happy my mom, Frank and I were able to have this time with them.
Posted by Kellee at 10:22 AM