This Marks the End

Saturday, we cruised up to Mount Charleston. On the way, we stopped at Retro Bakery. We've been eager to try it after hearing its praises, it's much further than a hop, skip and jump away so this was the first time we were in the area during business hours. We figured a cupcake picnic was in order.

The girls behind the counter were warm and friendly. We looked over our options and selected four cupcakes and a cookie for the road. The damage came to 12 bucks and some change. 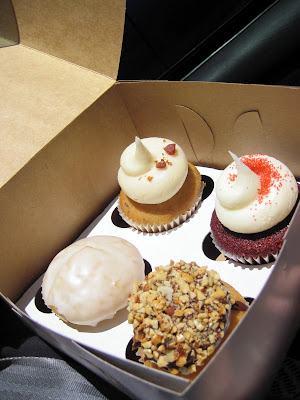 We tucked the cupcakes away for later and dug into the cookie as soon as we pulled away. This cookie was loaded with a variety of chocolate and butterscotch morsels. It was tender and chewy, but WAY to sweet. We each had a bite, we couldn't finish the rest.

Later, we dug into the cupcakes. The Glazed Donut cupcake was the first we tried. It was pretty good. The cake was nice and moist and the glaze was on the verge of being too sweet. Frank tried the Red Carpet next. He found the almond buttercream overly sweet and complained that the cake was a bit dry. I was most excited about the Maple Bacon cupcake. My teeth ached from one bite, I scraped the buttercream off and enjoyed the cupcake itself. It was pleasantly moist from the maple syrup center. Lastly, we had the Drumstick. I loved the ganache and nut topping, just not the buttercream frosting beneath it. This cake was too dry without it.

This concludes our cupcake adventures. We're officially done seeking out cupcakeries. We found Mad Hatter first, and it is by far the best we've had in Las Vegas and other major cities we've visited. It may be pricey, but their cupcakes are damn good. The cake is always moist and since they are made to order, too much frosting is rarely a problem. I know what I like and know where to get it. Why go anywhere else?