Hope y'all had a safe and happy holiday weekend. I don't know about you, but I could use another three days to recover. I am exhausted. The fatigue was worthwhile, however. We had a great time with friends that joined us for our Independence Day celebration.

We had an array of snacks to nosh on while folks arrived. There was chips and salsa I made on Sunday. Potato chips and onion dip that I recruited Frank to make because I nearly forgot all about it. A veggie tray with ranch dip, plus guacamole and pinwheels.

The Italian Beef that we got from Windy City Beefs N Dogs was fantastic. It was a real hit with our guests, too. For vegetarians, I also served Caprese sandwiches. Then, we had sides of creamette salad and cucumber, tomato and onion salad which I also made. 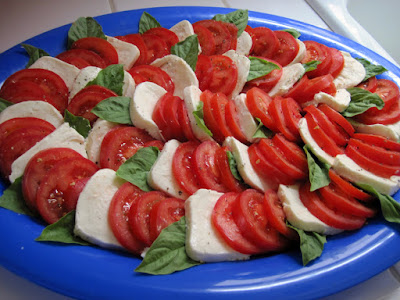 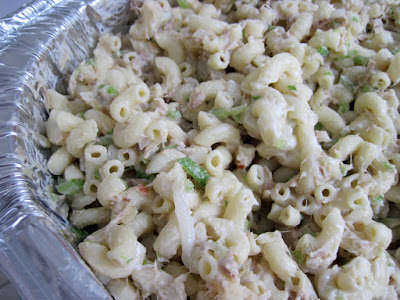 For dessert I baked patriotic cupcakes and made pretzel salad. We also had chocolate covered strawberries. 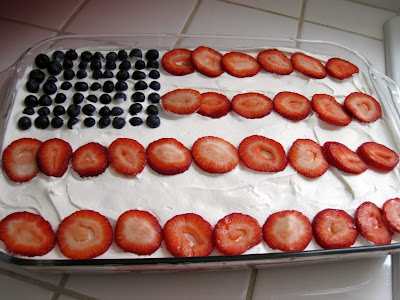 All in all, the grub went off without a hitch. I was pleased. I owe much gratitude to my latest kitchen gaget, Chef's Envy. It is completely out of character, but I bought this "As seen on TV" mandolin at Smith's on Friday. I happened to be in the produce section during a demo. For 29 bucks, I got the Chef's Envy plus a chef's knife and shears... I realize I sound infomercialish. It was an easy sell, but I actually was in the market for a mandolin. Yet, I was a little skeptical that the Chef's Envy was going to work as well for me as it did in the demo, but it really is a time saver. Plus, I was able to get uniform slices and dices with ease. My knife skills are pretty weak so I was quite impressed. I used the mandoline for celery, onions, tomatoes,cucumbers, strawberries, and lemons. I can't believe I'm saying it, but it's a great tool to have in my arsenal.

Bellies were full and the sun had set, that could only mean one thing on the 4th of July... Fireworks! Frank and a few friends worked to light Excalibur Artillery Shells and Saturn Missiles in unison. Then, they coordinated the grand finale with the neighbor's a couple houses down. It was a spectacular end to our celebration.
Posted by Kellee at 11:37 AM