Checking out the Buzz...

I've heard several raves over Buzz BBQ and finally decided it was time to stray from BBQ ribs at Ellis Island to see for myself if Buzz is worthy of its buzz.

I drive by the southwest location daily, and on occasion the smoker will overpower the scent of neighboring In-N-Out burger, that's a feat on its own. But it was seeing the "Two can dine for $19.99" banner that finally lured us in.

When we walked through Buzz's doors the scent of smoke permeated throughout the restaurant. "Ahh! We should be in for a treat." We were seated in a booth, we ordered pulled pork, andouille sausage and ribs with mac & cheese and sweet potato fries. And let's not forget apple cobbler a la mode for dessert. 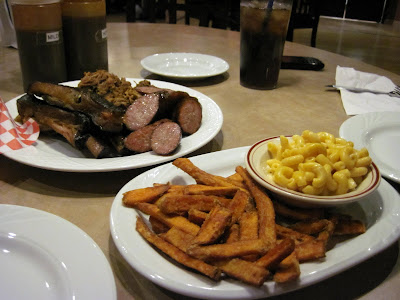 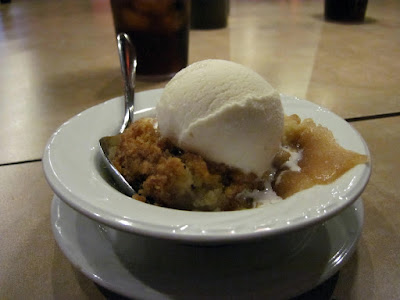 The pulled pork was best made into a sandwich with the rolls provided. It's pretty wet and I thought it was the weakest meat of our trio. The sausage had bold flavor that didn't compete with the smoke. The ribs were the best of the three. Dry rubs generally aren't my preference, but these were good and fall off the bone tender. There was nothing special about the mac & cheese but I liked it. So often you get gummy noodles, but these noodles were tender. The cheese was on the runny side, but I'd rather have that than a globby congealed mess. The sweet potato fries were top notch. Crisp and no added sweeter (I hate when they're sprinkled with sugar). The cobbler was damn good. It was nearly "lick the bowl clean" good.

Dinner for two for $25 with drinks is a helluva deal.

We popped over to the bar after dinner for a beer. Frank was able to relive his youth with Hamm's on tap. No beer flavored water for me. I tried a local brew, Tahoe Blue. Bitter in a good way, I enjoyed it. Our bar tab was $6.50 for two pints. Gotta love that, too. The buzz is all about the value at Buzz BBQ.