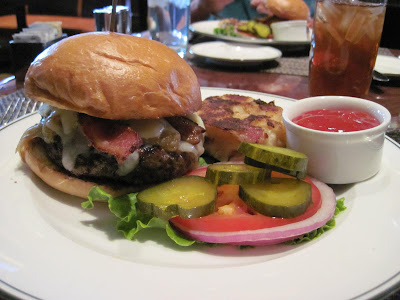 A couple months back, my mom had breakfast with friends at the Henry inside the Cosmopolitan. She raved about the hashbrowns, and insisted that I go to try them. This weekend we had a fun filled day together and it began with brunch at the Henry.

I was taken aback by the price for eggs and bacon. $16? I think not. This did make the build your own burger seem like quite the deal. We both opted to go that route and we subbed the French fries with hashbrowns. Service was prompt and friendly.

The build your own burger allows you to choose three from categories such as dairy, garden and earth. My burger was placed in a soft and airy bun, the flavorful patty was cooked to a true medium with a juicy pink center and it topped with monterey jack, carmelized onions and bold smoked bacon per my request. I was tad surprised how tasty this burger was, I really enjoyed it. My mom liked hers, as well. The hashbrowns, however, we not as good as she remembered. I was unimpressed. When I hear "hashbrowns" I think shredded potatoes griddled to a crisp. These were what I call breakfast potatoes. Simply large diced potatoes, sauteed with onion and formed into a cake. I thought they were underseasoned and too starchy. But, had we not come for that I'm doubtful that I would've ever tried the Henry's satisfying burger.