Ages ago, I searched for delicious pad thai. Yes, that's how I judge my Thai restaurants. If they can't get that right, I figure they won't produce much else well. After sampling a half dozen disappointments, I found Archi's Thai Kitchen on Flamingo/Jones. I've been a loyalist ever since. They've had tremendous success, they've even opened a couple other locations over the years. An Archi's is always within reach.

When Surang's Thai opened near the house I was skeptical. We've been lured into new Thai restaurants before only to be highly disappointed. Stellar reviews have been circulating since they've opened, and eventually I knew I'd have to to try it for myself.

We stopped in for dinner one night to attempt to satisfy a mean craving for Thai. We were the only diners about 7 o'clock on a Friday night. I was a bit alarmed, but we were welcomed with a smile. We ordered shrimp rolls, chicken pad thai (7) and spicy eggplant (8).

The shrimp rolls came out first, they were piping hot, fried crisp and the shrimp tucked inside were nice and tender. 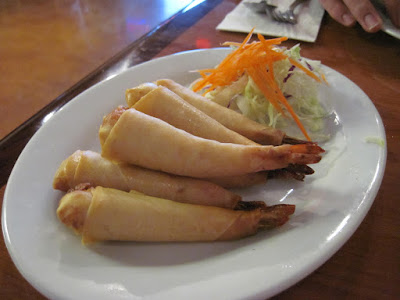 Our entrees followed closely behind. The pad thai looked delicious and it had all the right components, we were anxious to dig in. It was real good, second only to Archi's. We chose a 7 for spiciness, but there was more sweet than heat. I'd go for an 8 or higher next time. 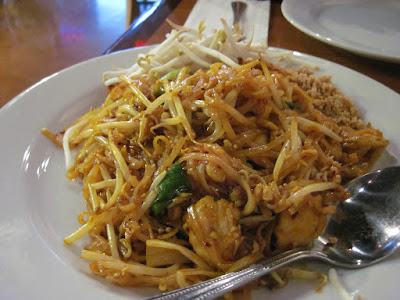 The spicy eggplant was fantastic. It had the right amount of heat. The veggies were fresh and it was all nicely flavored. It rivals Archi's version. In fact, it may be a bit better because it's been less oily than Archi's. 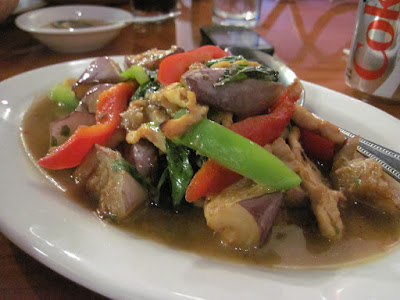 Our dinner was less than $30, most items are $7.95 (weekday lunch specials are 6.95). It's a tasty dinner that won't break the bank. By the way, we must have just been early to dine. By the time we wrapped up our meal the tables were filled with other diners.

That's not the end of Surang's Thai. No. A few days later, I wasn't feeling great and making dinner was out of the question. We ordered take out. We ordered wonton soup and spicy eggplant. Again, the spicy eggplant hit the spot. The wonton soup wasn't the best I've had, but it was fine. I thought the broth was a bit bland. It might have just been my inability to taste so I won't fault them. It was nothing a few squirts of sriracha couldn't fix.

Takeout couldn't have been easier, but if we were feeling incredibly lazy it's nice to know delivery (with a minimum order) is also available.