I'm on a quest to find great tacos. With such a large hispanic population in Las Vegas you'd expect some good Mexican eats. Honestly, I think Sin City comes up short. I wait for trips to Mexico and San Diego to get my fill. I've tried the best the strip and West Side offer and none have measured up. Casa Don Juan, downtown, is my top choice thus far, but even they don't have it all. Since I've come up empty on most restaurants, I thought it was time to try a few taco shops. There must be better than Roberto's and Tacos Mexico, right?

We set our sights on the east side, Tacos El Gordo and Los Tacos are supposedly some of the best tacos in town and they're conveniently located in the same shopping center.

Tacos El Gordo has several walk up windows, it's cafeteria style. They're known for adobada or spicy pork tacos. The pork is sliced off the rotisserie and topped with cilantro, onion, and a creamy cilantro guac sauce, and also pineapple if you'd like. They have carne asada, too, and more rare finds like tongue, head and tripe. All tacos are $2. 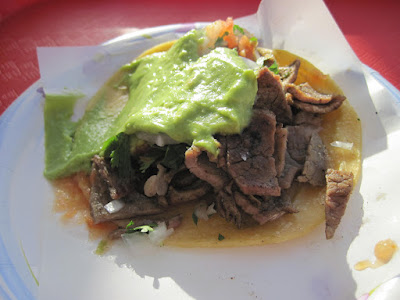 Tacos El Gordo, Spicy Pork. It was good, but not spicy nor good enough to order a second. 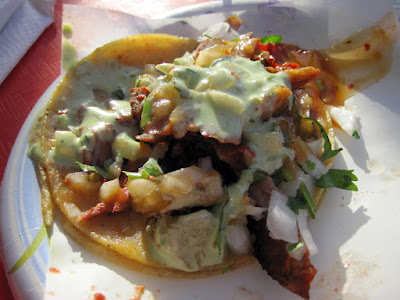 Los Tacos has more of a fast-food feel. They offer carne asada, carnitas, al pastor, pollo, head and tongue. Tacos are $3 each, they are a bit bigger than those at Tacos El Gordo and other taco shops. Just watch it when you say yes to everything (pico, bean, cheese, sour cream and guacamole). It's an extra $1.50. Each of our tacos were $4.50. 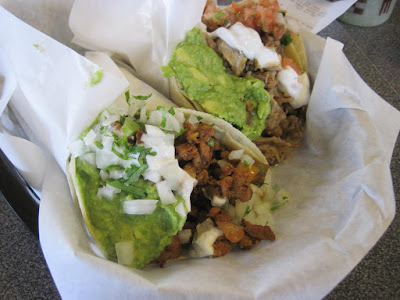 Los Tacos, Carne Asada. Pretty good with everything, however, not worth $4.50. 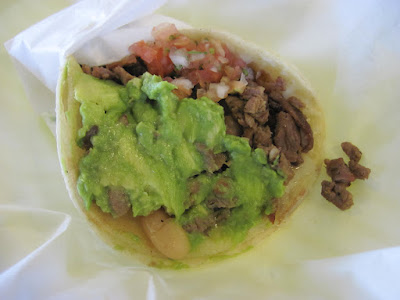 I wouldn't make a special trip for either one, if I had to pick one, I choose Los Tacos.

you should try Taqueria El Tizon. They have some of the best carne asada that I have tasted in Las Vegas yet and I'm from Los Angeles and I know my carne asada. I think you will be pleased.

Thanks for the tip, I'll add it to the list of place to try.

Really? And you head to SD for tacos... Where do you go? Tacos el gordo has one of the best, if not THE best pork adobada in the area. The place is Always packed.

In San Diego, I like La Puerta. Los Panchos and El Indio are decent, too, but for different reasons. El Gordo's adobada was good, but not spicy (their carne asada, however, was terrible). I wanted something more special like El Fogon in Playa Del Carmen, now their al pastor is sent from heaven.