Before I found Archi's Thai, I tried a half-dozen other Thai restaurants and not one was able to get me coming back. Once I found Archi's the quest had ended. I found delicious Thai eats. It is my go-to place, however, every now and then I'll try somewhere new just to be sure I'm not missing out on something great. This weekend we tried Aranya Thai Bistro. It's located on Flamingo near Grand Canyon Pkwy. We've been by it a bunch of times, but we're usually grabbing Fuddruckers or cupcakes from Mad Hatter. We were lured in because Frank's uncle had a discount with the Entertainment Book card.

The space is relaxed and nicely decorated, but frankly I don't care what a place looks like if it's tasty and priced right. Still a nice atmosphere is always appreciated. Frank and I ordered our standard Thai dishes: pad thai and spicy eggplant (staples that serve as a basis for comparison). Pete ordered spring rolls and stuffed chicken wings. 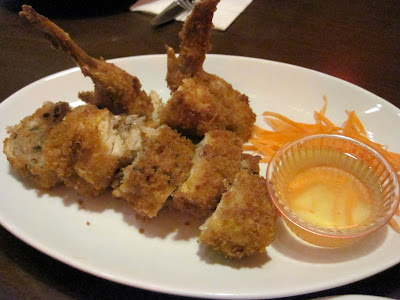 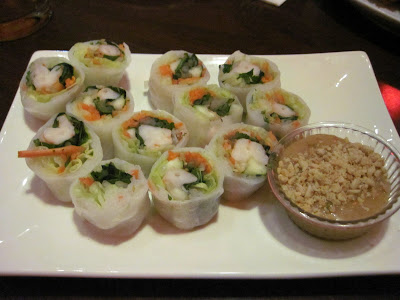 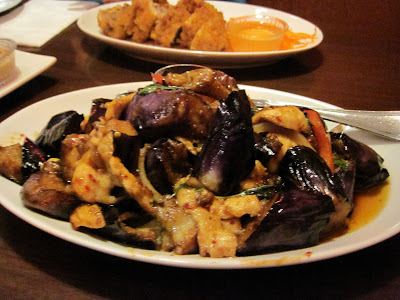 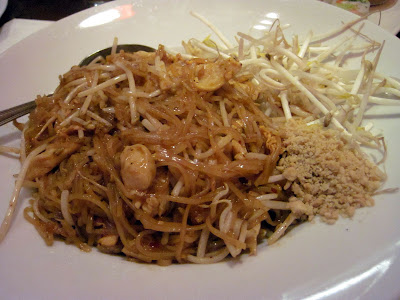 The peanut sauce was the highlight and the spiciest of the dishes despite specific requests for spicy. The eggplant was waxy and sweet. I was not fond of it. However, it was better than Frank's too sweet pad thai with overcooked noodles. He gave me a small portion to try and I had no desire to finish it. It was some of the worst I've encountered in town. Pete wasn't impressed by his selections either, and he's not biased he's never had Archi's.

To make matters worse, prices were on the high side and service was below average -- Timing was off and refills were slow. As you might imagine we'll continue to hit up Archi's to settle our Thai cravings.

A sweet pad thai? Yuck! Too bad your dinner was so unimpressive! I think the stuffed chicken legs look pretty good in the photo though! Speaking of Thai, there doesn't seem to be a Thai restuarant on the Strip, not counting those fusion Asian-Hybrid restaurants. I think a celebrity chef needs to open one up on the strip, I can already see the "Kobe" beef pad-thai on the menu with a price tag of $85 a plate. :)

The chicken was greasy, and tasted it, too. Sweet pad thai is an epidemic. Maybe they assume I can't handle what I ask for? Whatever the deal is, I can only get it hot at Archi's and sometimes they even hold back.

The strip lacks a true Thai place, most are fusion or Asian. Doubtful a celebrity chef would bring authenticity, but it would certainly bring high prices. I think you're right on the Kobe.