We had the coldest New Year's on record. It was certainly not my preferred way to start 2011. I never saw the mercury rise above 33 on New Years Eve. I swore I was going to stay in all day just so I could pretend it didn't happen. I did venture out, however, we soaked in the hot tub leading up to New Year on the Eastcoast. To celebrate our own we dressed and drove up the mountain near the house. It provides spectacular views of the valley. There were about 5 bonfires keeping revelers warm, we kept toasty inside the truck until midnight was near. Then we hopped in the bed for unobstructed views. Happy New Year! The fireworks began. The 8-minute show was at least 3-minutes too long. It was just too cold to enjoy such a lengthy display. We stuck it out, but the second it ended we dashed into the truck for warmth.

Frank fought the crowds all weekend. He swears it was the most crowded New Year he's seen. He was beat when he got home last night. We relaxed in the hot tub. It was pleasant except that our Sunday night hot tubbing was interrupted by snow flurries. Fortunately, they were short-lived and none stuck.

This morning I peeked outside when I got up, at 6:15 it was dark and dry. No snow had fallen overnight. I went in the shower, the sun came up and by the time I got out giant flakes were falling outside the window. Say it isn't so.

I dressed and head downstairs. Not only only was snow falling, it was sticking. Yuck. 2010 was the only year I escaped snow. Every other year snow has fallen where I've lived, 2011 is no exception. 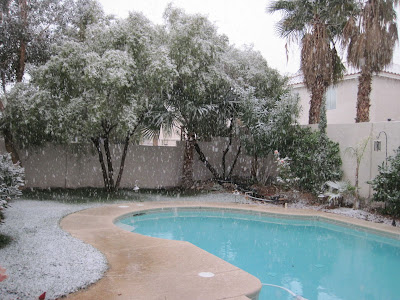 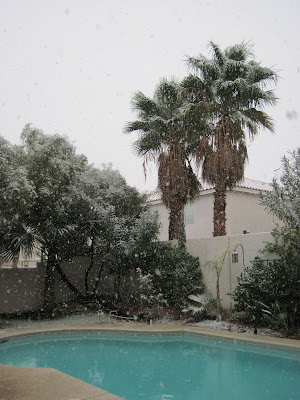 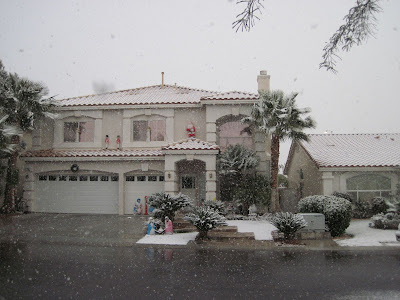 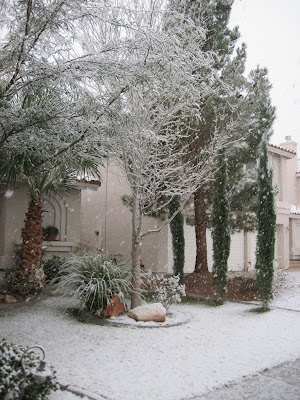 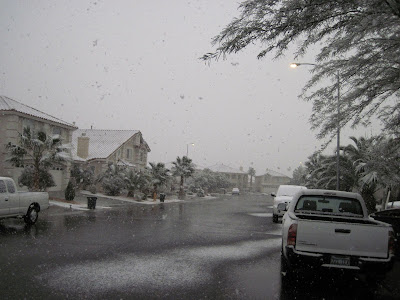 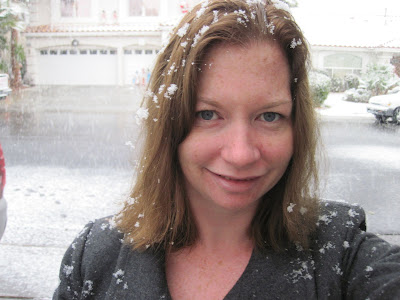 Nearly eight years ago, I moved to the desert to be free from snow... It looks like the joke is on me.
Posted by Kellee at 9:42 AM

Sounds like Vegas is slowly recovering--they were even talking about it on CNBC today.

Glad to hear it!

/sorry about the snow, though

It's seems we are on an upswing. Better occupancy for sure. Casinos are spending a bit and looking at expansion plans so that's a big relief. Soon our stimulus funded projects will end, we'll need the casinos to step up. Word has it, my company is giving raises this year. That's promising.

I would have been so pissed if I came out there for New Years and it snowed, especially since it hit almost 60 in Ohio NYE day....

Yeah, my mom whined and whined about going to Chicago and not wanting to deal with cold. She's had more sunny days and temperatures have been nearly the same, only when we were having the coldest of the cold they were enjoying upper 50's too. It was a good year to spend the holidays in the midwest.