November was such a busy month for me, I think it'll take most of December for me to catch up. I did want to share about to concerts I saw last month.

First, was the Dirty Heads at House of Blues, Mandalay Bay. It was my third time seeing them this year. It wasn't my favorite performance, but it was the first indoors. They headlined, and Wallpaper opened for them since Gym Class Heroes cancelled their leg of the tour. Wallpaper was not my style of music, but the crowd seemed to enjoy it.

This was my first show at the House of Blues, I've only seen comedy acts previously. It's not the best venue, but I like that you can see the stage from almost anywhere. We caught the show from the side of the stage near the bar. I would've liked to have been front and center like previous shows but it was a risk I couldn't take with my ankle. The show was standing room only unless you bought VIP tickets that offered bar or bench seating. Frank asked a security guard if there was a place I could sit while Wallpaper was on stage. She was mean nasty bitch. She questioned why one would go to a show knowing they had a broken foot? Frank and her had a few exchanges before he stormed off in disgust. What set him off? He asked, "well, what about those in disabled or in wheel chairs?" Her reply? "They have their seat!" Totally uncalled for. We returned back to our spot on the side of the stage. There was no security there, Frank asked him about a seat for me. A couple seconds later, he appeared with a bar stool. We thanked him profusely. I was able to sit and conserve my energy for the main act. Dirty Heads did not disappoint. This was one of their last stops on the tour so we got to hear a couple new songs that we hadn't seen earlier when the tour was just starting out.

Our second show was a treat because my cousin plays bass for two bands and they left the midwest to tour the east and west coasts. On my coast they played Tempe, Vegas, San Diego, the Viper Room in LA last friday Friday and Slim's in San Francisco on Saturday. While, here, they performed at Hard Rock Cafe on the strip. 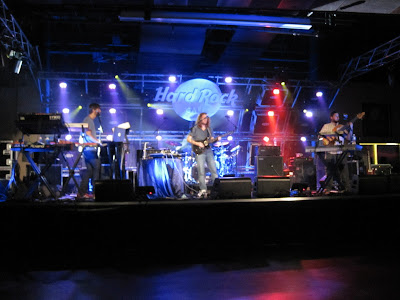 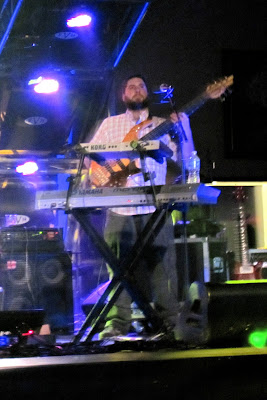 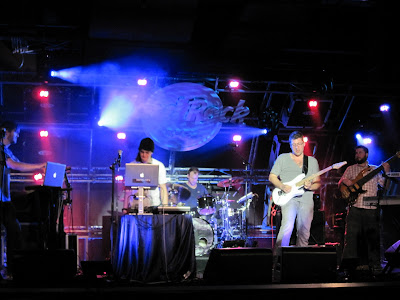 We got to the venue early and had a chance to chat with Kevin. His band Strange Arrangement played first, the music was from there latest album, Polygraph, so I was unfamiliar. It's good stuff, though, check it out. It's also been nominated for Homegrown Music Network's best studio album of the year. You can vote here. Dexterous Roy did a DJ set in between shows. That was the first I've seen a DJ with a drummer, it was neat. Then, Digital Tape Machine joined them. Kevin is in that band, too. It's a side project of Umphries Mcgee, which is a pretty popular midwest band. They sell out in Chicago every time they play.

We left just before midnight. I was too sleepy to stay and we both had to be up early. Digital Tape Machine was still on stage, my brother stayed until the end, he said they finished their set at 12:30. That Hard Rock Cafe is a very cool venue, I'd definitely see another show there. I love that they pump the music through the entire building, you can hear it in the bathrooms and walking along the strip. At this show, they had a wide variety of bottled craft beers for $5. I took a liking to Shiner 102. It was great to enjoy a good beer while taking in the show.
Posted by Kellee at 12:23 PM