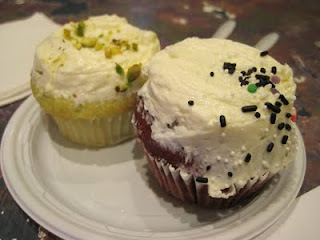 Yelp is a great resource when scouring the best places to eat. It has served me well in our travels, even if it did lead us astray a few times in New York City. I always take the time to give back, and share my opinions based on my own experience in hopes to help someone else out.

I reviewed all the places we ate in NYC just like I do after any trip. I apparently ruffled some feathers with one review in particular, the cupcakes at Sugar Sweet Sunshine Bakery. Shortly after posting my thoughts I received a comment from the owner.

If I had my own place of business I'd be interested in what my customers had to say, Yelp can be a great resource for them, too. Before I get too far ahead, let me share what was said, my review was very similar to what I shared here...

"After Katz's Deli, we left a little room for dessert so we sought out Sugar Sweet Sunshine bakery, which came highly recommended for cupcakes. We ordered two: Sexy red velvet and pistachio. Both had "the moose" aka satin buttercream, which seemed to be their signature icing.

They weren't the most attractive cupcakes, but I don't mind as long as they taste yummy. We each dug in and gave each other the same look. "Ick." These were among the worst cupcakes we ever tried. The cake was dry. The icing was bland only leaving a strange artificial taste. It was very odd, I've never considered myself a great baker, but I can make a better cupcake. I swear this place is highly rated because it's fairly cheap, only $1.75 per cupcake."

The response from the owner follows:

"Kellee, what a shame you & your friend didn't enjoy your cupcakes. Sure, we are more shabby chic in the looks department, about taste and trying to give our customers a price that is fair. Perhaps after glutting it out @ Katz's deli you didn't leave room to taste much else. That being said, that if you think you can make a better cupcake & run a successful business then step up to the plate. Let us all who do this for a living see what you got. I guess our #1 Zagat rating and the over 1100 reviews really do lie. What does the majority know right?"

I'd expect someone with a business to have thicker skin. Plus, if someone was dissatisfied I'd address those concerns. I felt this response was immature and unprofessional, but to each their own. I will say that popularity means zilch, McDonald's is widely popular but that does not mean it is any good. There are plenty of places the please the masses on Yelp or Zagat, but that never means they are the best of anything. Popularity attracts attention, Sugar Sweet Sunshine Bakery had mine, and then, they lost it.
Posted by Kellee at 9:13 AM

Wow...you're right about two things, that's for sure.
1. The owner is awfully sensitive and definitely immature. I would think they would have that so-called thicker skin - after all, they are stereotypically portrayed (and from my experience enjoy) as 'tough New Yorkers'.

2. Popularity does not equal quality. The McDonald's comment was spot on.

Sheesh...great to know the places to stay far, far away from.

Being from NY now I know not to even try it. Any owner who reacts that way does so because they know that your comments were true and they are afraid that others will realize it.

I was taken aback when I saw that response. Pretty wild.

what a dumb bitch she don't know cupcakes!

Another one of the owners made a snarky comment to another negative post either right before or after yours.

In my mind, I think she would have won the day by simply apologizing and saying that if you're ever that way again to please stop in and try another one on the house. Even though the liklihood of that happening would be slim, it would certainly have been portrayed as goodwill on their part.

Every place can have a bad day and/or serve a bad meal. Instead of being defensive and condescending, she could have turned it into a win. Sounds like they need a PR person to handle their social media.