We hit the road Sunday at 7 o'clock we hoped to beat traffic leaving Las Vegas and we did for the most part, it was just a bit slow and go until Barstow. We feared how long of a ride it might be when Nicky asked, "Are we at Disneyland, yet?" We were only 45 minutes in, we hadn't even left Nevada yet. Fortunately, he only asked a few more times and we made fairly good time; about 4 hours.

I reserved discounted park hopper tickets from frontofthelinetickets.com. We had to pick them up at a gas station a few minutes from the park. It seemed a little shady, but our friends bought tickets thru them the week before. We paid $70 cash for each ticket, which saved us $31 per ticket. The only catch is that we had to return the passes in a drop box before morning. It worked out well and I'd definitely use them again.

Rather than pay a fortune for a bite in Disney we ordered nachos and taquitos from the Mexican restaurant attached to the gas station. Nicky refused to eat and was busy pouting because he wanted a blue balloon and got a pink one from the gumball machine. He's usually very well behaved and this whiney pouting bit was totally out of the norm. I was a little afraid of what the rest of the day might be like, but he pulled a 180 shortly after getting back into the car. Out of nowhere he says, "I hope the hotel has soft beds." And that was that, he was his usual self afterwards.

We had to wait in line to park, about 10 minutes and $15 later we found a spot. We walked to the tram and waited for our turn to be taken to the parks. Not only was it Sunday, but it was also Mother's Day, I knew the crowds would be ridiculous. I figured California Adventure would be less crowded and better to do first, by the time we wrapped it up there crowds would be thinning at Disney... Tired kids, everyone hungry for dinner and all that. We stuck to my plan and it worked out well. 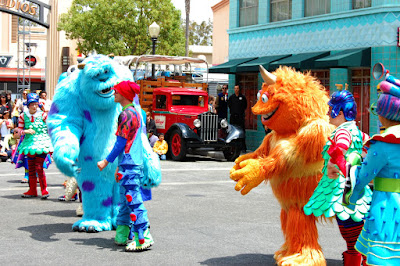 We caught the noon parade with Monsters, Inc. characters watched that for a bit and then went on our first ride, Tower of Terror. 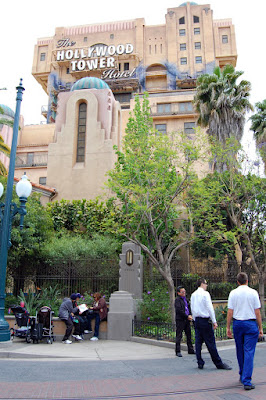 The wait was about 35 minutes; the line moved pretty well. Nicky was a little scared once we got inside the basement, but he handled it better than you'd expect from a 4 year old. We took our seats in the elevator and 3...2...1 we were sent on a heck of a ride. It was like an enclosed Big Shot, you shoot up and free fall a few times. We had a blast. Nicky was FREAKED out. It was hilarious. We've never seen him frightened before. We asked, if he wanted to go again? "No!"

We went on to Bug's Land and rode a couple kiddie rides. The lines were short so that was nice. 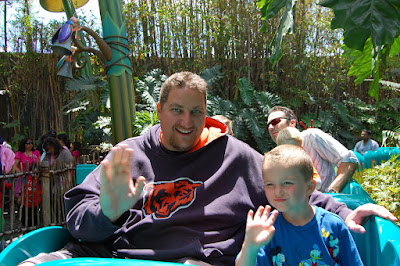 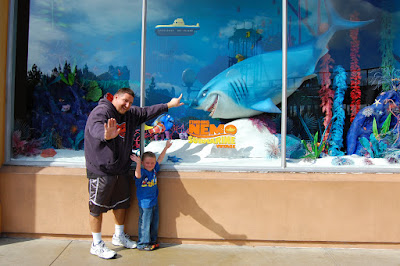 We walked the park a bit and made it to the back end. Nicky wanted to ride the big roller coaster, but he was a few inches too short to ride. I spotted Toy Story Mania, I heard it was a can't miss. The sign said it was a 45 minute wait, it looked like it'd be longer. About 10 minutes in, a nice man offered us a fast pass ticket. He worked for the park and was there celebrating with his family. Before we knew it, we were boarded. The ride is 3D and interactive. You play carnival games for points. It was a lot of fun for all of us. 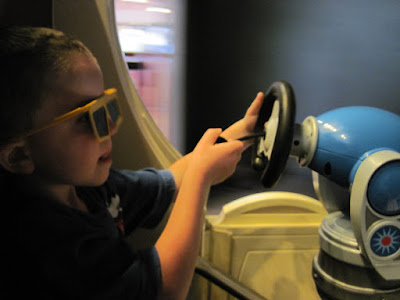 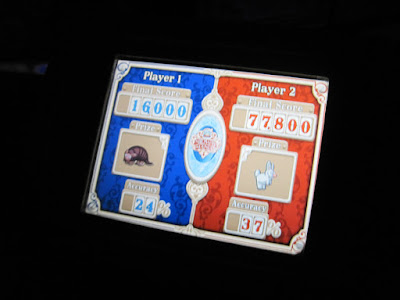 Next, we rode the giant Mickey wheel. We rode in a swinging cart, it was fun and we got to look out over the whole park. I got really chilly up there, though. 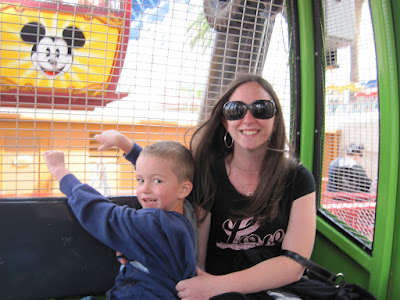 After that, we went back to Toy Story. Nicky and Frank, both, really wanted to do it again. They never took our fast pass so we used it again. It worked out fabulously. Frank and Nicky were a team this time, he wanted the high score of the hour and he got it. Amy beat me, but I had better accuracy. 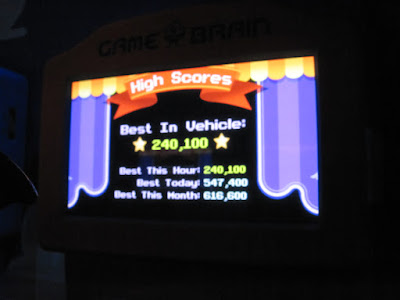 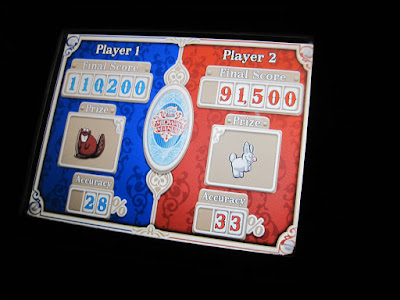 When we were leaving, Nicky said, "alright, guys, we can do the other ride again." Which one? "The up and down one." Tower of Terror? "Yeah!"

So, we went back and rode Tower of Terror again. He was a little scared, he held mine and Amy's hand for dear life, but he had fun. We all did.

We wrapped it up at California Adventure and walked over to Disneyland. Goofy was right out front welcoming the kids. This made Nicky's day, we had only seen Monsters Inc and Chip N Dale so far. 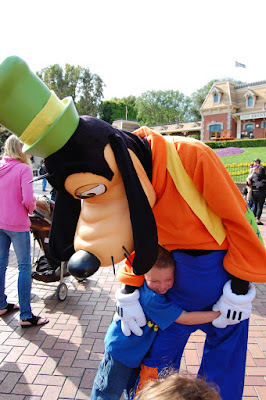 I took a map at the gates, but it was for California Adventure - Go figure. We hopped on the train that goes around the park to get our bearings. We stopped at Tommorrow Land to ride Space Mountain. This was our longest wait, the sign said 45 minutes but it was closer to an hour. Nicky rode with Frank for his first real roller coaster ride. He LOVED it. We did not. Our necks were killing us. I remember Disney World's space mountain being better. You sat tandem and there were more corkscrews with that one. Disneyland's has you sit side-by-side upright. It was killer on your neck. Nicky wanted to ride it again, but we didn't.

We were pretty hungry and we had heard so much about Thunder BBQ so we sought that out, only to be turned away because we didn't have reservations. We ended up nearby at the hamburger haus or something similar. We got cheeseburgers and Nicky got Mac N Cheese. It was terrible. Hard to believe that slop was $40. Nicky started dozing at the table. I thought we might have been done. But we decided to press on and see what we could do. We went on Snow White's ride and Nicky perked right up. We went on Peter Pan next. Then we were going to check out the firework show, but the crowds were insane 45 minutes beforehand everyone was already camped out. 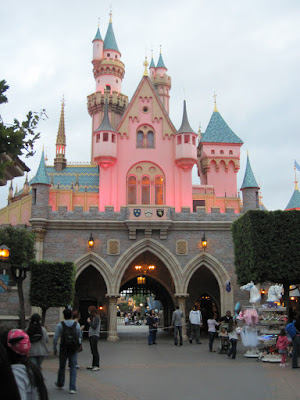 We took advantage of the empty park and rode rides with extremely short to non-existant lines. Nicky loved the Haunted Mansion so much we did it twice. We also rode Winnie the Pooh and Pirates of the Caribbean.

We all got ears, Nicky got Mickey, Frank got Jack Skellington and Amy and I got minnie. 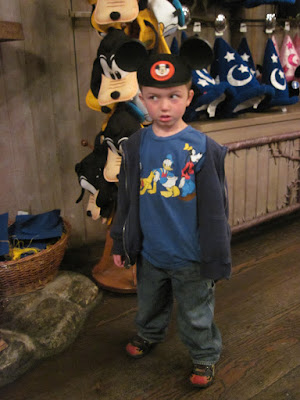 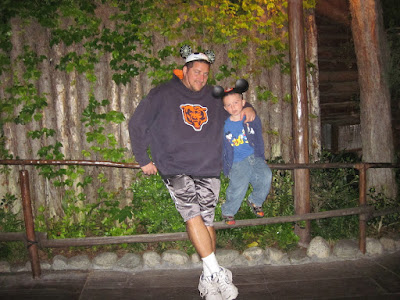 We were trying to make it back to Tommorrow Land to ride Nemo but we never made it. The train stopped running and our feet pooped out before we made it. Nicky rode the space ships last. The park was closing in 30 minutes so we headed back to the car. On the tram ride back, Nicky melted the hearts of all the riders when he yelled out "I love you, and I'll miss you Mickey". I've never heard so many aww's in unison.

12 hours at the theme parks wore Nicky out. He was asleep in minutes. We dropped off the tickets and checked into our hotel, Ayres. I was exhausted having been up since 5:30 so I stayed with Nicky, while Amy and Frank went to grab a beer at JT Schmidt's next door. They returned minutes later because the restaurant had long been closed. We all turned in, awaiting the fun that was ahead.
Posted by Kellee at 10:04 AM