Dinner and a Show

After a full day of cleaning and running errands Frank and I were off to Mandalay Bay. First, we stopped at Ri Ra the Irish bar at Mandalay Place. I wanted to check out their draft selection. There was one that piqued my interest, Delirium Tremens. A Belgium pale ale. We both had one, I loved the pink elephants on the glasses and tapper. The irony was fun, it was good strong beer to boot 8.5% abv. Frank also had a Weihenstephan, I had it before in Chicago and didn't care for it, but it was right up his alley. No Irish beers for us, but we found another Irish bar that was a winner.

We left to make our dinner reservations at Border Grill. Their chips were excellent two of the four salsas were good, we requested hot and we like the tomatillo. Our $49 meal deal from travelzoo came with house margaritas that weren't very good. We had an appetizer platter (chosen for us) to start. That had taquitos, empanadas, and sweet corn tamale. The taquitos were the best, we only wished we had known they were coming because Frank ordered the entree so he was stuck with more of the same. I had beer battered fish tacos which were tasty. I liked that they lacked the creamy slaw that so many places like to add. For dessert, we shared Tres Leche cake. It was drier than those I've had before, but still good. Service was attentive, the meal was ok. I'm glad we got it at a discount, but I see no reason to return.

It worked out perfectly before the concert, though. We were able to walk out from the patio, hit the bathroom, and we were right at the line to enter the pool. We were among the first inside, we grabbed a spot in the shallow end of the wave pool so we were front row. The water was bit more than ankle deep.

Us, waiting for the show to start. 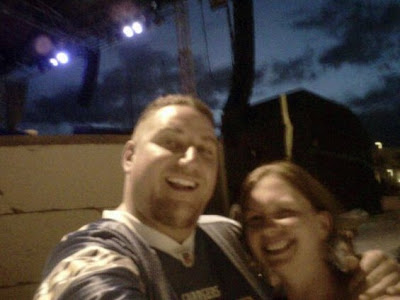 I had no clue who was headlining Dirty Heads or The Wailers. With the ties to Bob Marley, I thought it might be the latter, but I was wrong. The Wailers went first. They were good, but straight up reggae gets old fast. I much prefer dub and reggae rock. It was hotter than hades and humid as can be. I went to get water, they were price gauging $8 for a liter of Fiji. $16 later we were refreshed and rehydrated. Dirty Heads took the stage and the place came alive. It was the largest crowd we've seen yet at a DH show. Good to see. They played three new songs, two we heard at the San Diego show a couple weeks back.

Before they went on, we were talking to this guy (Eric) who saw them in SD and the night before in Catalina (I tried to win tickets to the show, he actually did). He was chosen to go on stage and perform the Buenos Noches rap. They've never done it at the shows I've been to, but my brother told me they did it at the one in Chicago. Anyway, we thought that was cool. Then, last night we learn that the guy is a friend of Frank's friend in California that went to school with the DH's in Huntington Beach. Small world. Frank found video of Eric rapping at the Catalina show.

Awesome show, but liked the one in SD better. So I'm glad we caught it. Weather mainly affected that. I hope they come back soon, and don't wait another year to return.
Posted by Kellee at 2:24 PM