We grabbed lunch at Carnegie Deli inside Mirage for our third Restaurant Week meal. My brother joined us, it was his first visit, but Frank and I've been many times. Our usual is the Corned Beef Reuben. It's plenty for two and it is delicious. We think it is the best we've had in Las Vegas (Langer's in LA and Katz's in NYC are better, though).

We never got around to trying Carnegie's pastrami so Restaurant Week's $20.11 lunch provided us with the perfect opportunity. 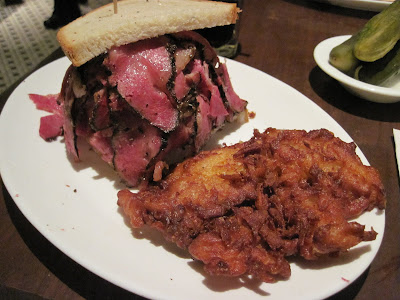 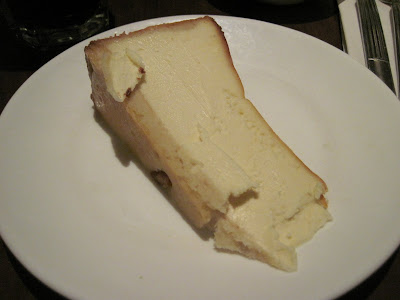 The pastrami wasn't as lean or tender as we'd prefer, but I thought it had a nice flavor and it was still a good sandwich. I'd probably be thrilled with it had I never tasted the gloriousness of Langer's in Los Angeles. The latke was good, but not great (overly greasy). The cheesecake was delicious. It was half of the usual sized portion, but this worked out well because it left me with a satisfied but not too full belly.

My brother had the corned beef sandwich and he was in love. He thought it was easily the best corned beef he has ever had.

There was a wait to be seated, but the tables turned over fairly quickly so it didn't take too long to be seated. Service was attentive.