Tuesday, we slept in. All the walking must have been catching up to us. Clearly, we were beat. I called the front desk for late check out. He asked how long I needed? I asked how late could I have without a charge? 2:00, he said. Then, 2:00 it is.

We went back to Petite Deli for another bite, it's a great way to start the day. Today, she gave us pasta salad and a scoop of potato salad. I ordered the Italian Hero again, and Frank tried the chicken salad sandwich since three people ordered it the day before just in the short time it took us to devour our sandwiches. It was good, but we agreed that we'd likely prefer tuna. My hero was as yummy as ever. 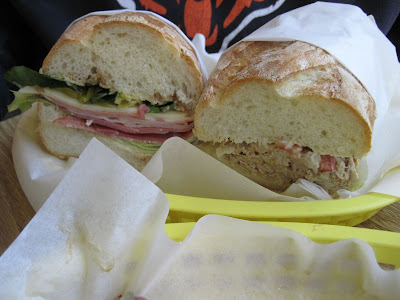 We went back to the hotel to rest and pack knowing our time to do so was limited. 2 o'clock quickly rolled around, we checked out and checked our bags and then ventured out to see the sights. 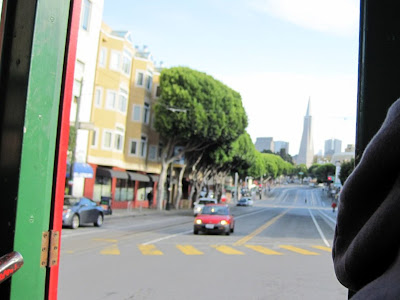 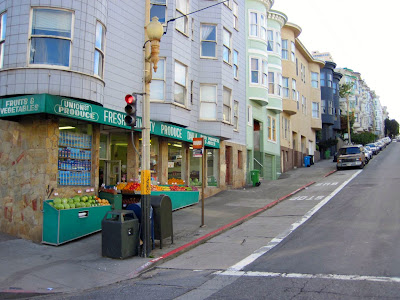 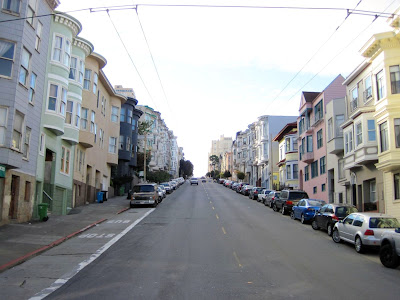 We stopped at the Cable Car Museum. It's a neat little place that gives the history of the cars. It is also where all the lines intersect and where cars are housed, and repaired. 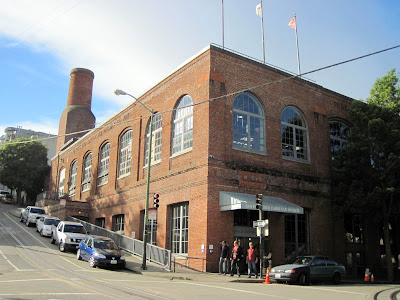 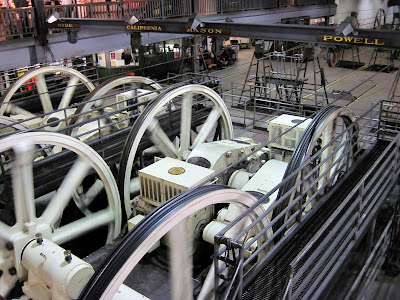 After, we went in search of the main entrance to Chinatown. We've only taken the back way in previously. It was an easy find, so easy that we actually stumbled on it by accident. 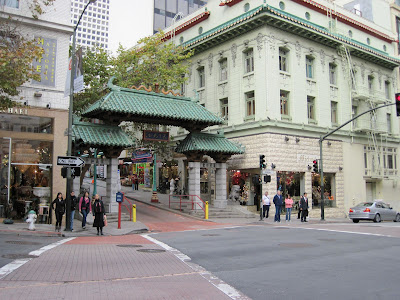 Nearby we stopped in Teuscher Chocolates, I knew nothing of them it was simply the scent of chocolate that lured us in. We were quickly given a lesson and were told they were best known for their Champagne Truffles. We each got one, plus a few other hand picked treats. $16 later we had an itty-bitty bag of candy. The truffles were very good, but our favorite were actually the pralines. We tried hazelnut and pistachio. We ate our candies outside Starbucks (Frank popped in for a coffee) and then we continued on by foot. 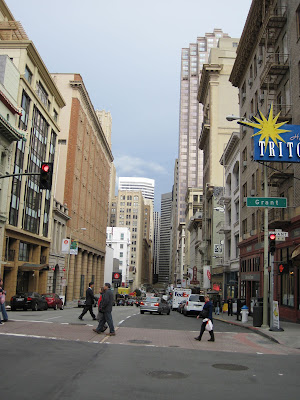 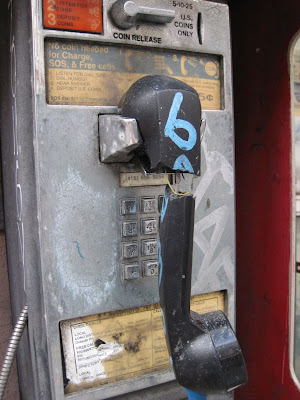 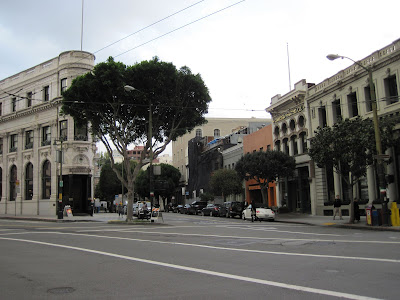 When I spotted this crane I knew there was something peculiar. It took a minute to figure out what was so odd. Then, it hit me. 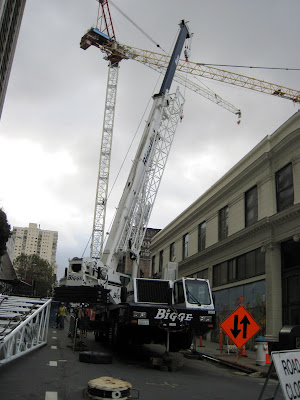 They have to compensate for the unlevel pavement. The front end of this crane was off the ground. Pretty wild. 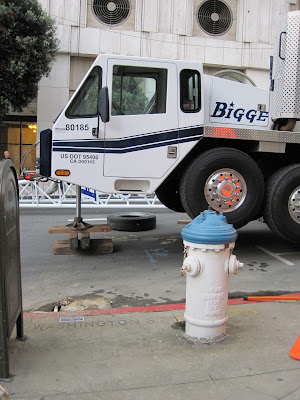 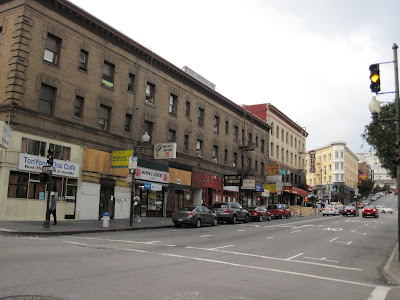 It grew to be late afternoon. It was time to get our last San Francisco meal in, we grabbed a bite at R & G Lounge. They're famous for salt and pepper crab. If only I had the appetite to try it, next time, for sure. Instead, we ordered delicious fried rice, not dark like what we were used to in Chicago, but the flavors were right on. We also had 1/2 a roasted duck. I loves me some duck and this did not disappoint. 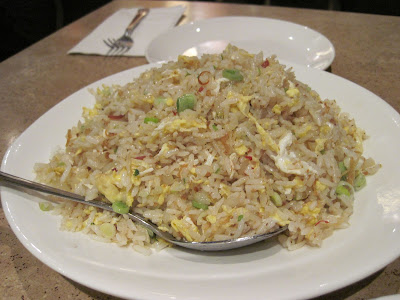 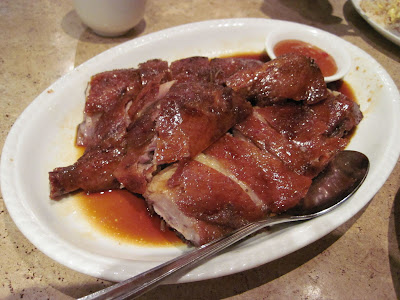 We just a little time left before we had to collect our bags so we connected over to the Hyde Cable Car. We hadn't been on it this trip. Now, we felt complete. We stopped at Lombard street to gawk and soak up the last views of the city before it was engulfed in fog from the storm that was rolling in. 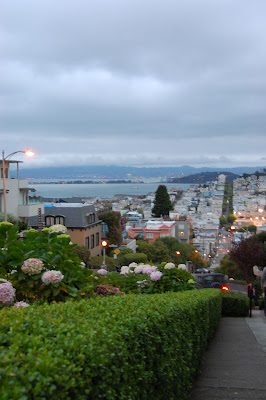 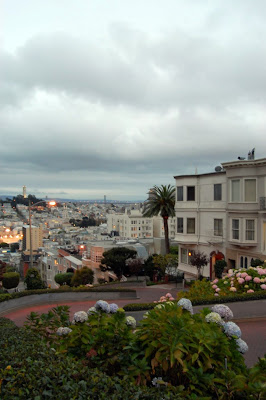 It began to drizzle, and the drops got larger and larger until it poured. Silly me, left the umbrellas in the luggage. Brilliant. It was a wet walk back to the hotel. We grabbed our bags and headed back to the Cable Car for our final ride on the Powell-Mason line. When we hit Union Square we passed a hotel with camera crews outfront. Supposedly, it was American Idol. While, we were stopped in front a girl came running out with a yellow ticket. I guess she's going to Hollywood? That's how that works right?

Anyway, from the cable car we hopped on Bart. We made our way to the airport quicker than we imagined. When we went to reprint our boarding pass, we checked to see if we could catch an earlier flight. There was one an hour before ours, we tried to switch, but it would cost $300. Nutty. We only paid $34/ea for the flight home. We'll gladly wait around the hour. Fortunately, the rain didn't cause and delays and we were up in the air at 9:05 as scheduled. An hour and half later, we were home. Greeted by a taxi driver that sobbed about the short fare. C'mon guys, MGM Grand is one of the largest hotels in the world, let alone the city, there is a good chance your fare will be headed there.

Just another reason to expand the monorail from the airport to MGM (at the very least), but that's a story for another day. That wraps up this year's visit to San Francisco. We'll likely return next November for more crab and other tasty delights.
Posted by Kellee at 9:00 AM