How I've missed you, San Francisco...

About a week before our trip Frank realized we booked our departing flight the same day as Breeder's Cup. We had to re-schedule for a later flight because Frank had to work, fortunately Southwest makes it easy and fairly inexpensive to makes changes. Our trip was shortened by 8 hours, but we were set.

He got off work just before the main race, it left just enough time for him to come home, change, and then we were off to MGM's valet. We left the car in their trusty hands and hopped in a cab to the airport. Our Southwest flight was on-time, we boarded just before 5pm. Even though our boarding passes were A48/A49 we managed to score the exit row. Frank was able to stretch his legs. He was positively thrilled. Too bad it was only 1.5 hour flight. However, his excitement was short-lived. A little one, a girl about three, sat directly behind him. She kicked the seat and fussed with the tray table the entire way. At least, it was only 1.5 hour flight.

We found ourselves in San Francisco in no time. We quickly left the airport and took the tram to Bart. Not long after, we were in Union Square hopping on the Powell-Mason Cable Car toward the hotel. We only made a brief stop to purchase our 3-day Muni passes, best $20 spent. Seriously. And there is even a booth that sells them right outside the Bart station (by the ginormous Forever 21). The Cable Car took us right by the hotel. It's less than a two block walk to the Tuscan Inn. We enjoyed its location, value and accommodations so much last time; It was no question when booking this trip.

We were promptly checked in and given keys to our room on the second floor overlooking the courtyard. This room was much quieter than the street view room last stay. We unpacked and rested a bit, while looking over dinner options. We settled on Sotto Mare in North Beach. It was a short-walk. It could have been an even shorter Cable Car ride, but we wanted to get the feel for the city.

Sotto Mare is a family run Italian Seafood restaurant. It was an easy sell. We drooled over the menu a bit before deciding on seafood risotto and "the best damn Cioppino". With a name like that how could I pass it up? We snacked on bread dipped in oil and vinegar to pass the time. Then, the waitress brought out bibs. We adorned them quite fashionably. 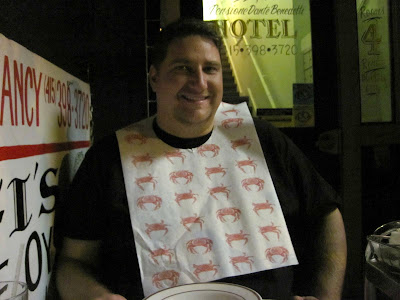 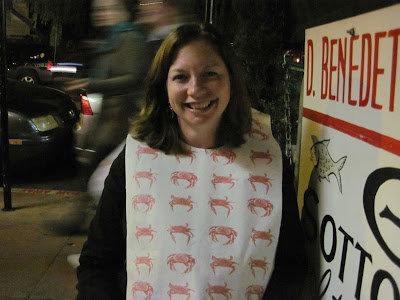 Once we were properly dressed for the occasion, we dug in. Literally. And guess what? It was the best damn cioppino. The seafood -- crab, mussels, clams, squid, scallops and shrimp were all cooked to perfection. Not a single piece was overdone. 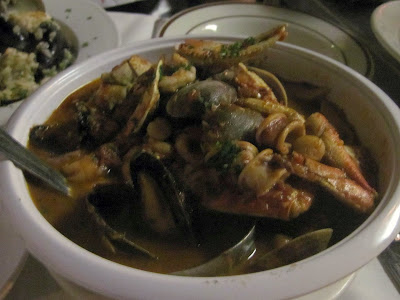 Frank's risotto was nothing scoff at. It, too, was wonderfully prepared. This meal was the perfect welcome to San Francisco. 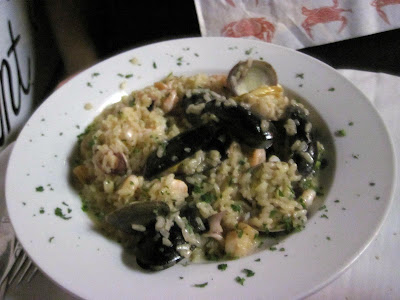 We paid the tab, which was pennies compared to what a similar meal would run in Vegas. And we walked North Beach just soaking up our favorite neighborhood. We thought we might grab some drinks at a bar, but it was Saturday night and we preferred something more relaxed so we stopped at the Safeway around the corner from the hotel and stocked up on pop, water, and we also bought a bottle of Pinot Grigio.

After chilling the wine, we popped that baby open and poured ourselves a couple glasses. Too bad it tasted terrible. I could barely choke down a glass. Rather than head out, we snuggled up and enjoyed a quiet night in, and prepared for an early start.
Posted by Kellee at 6:29 PM