Winter arrived this weekend, it brought rain and cold. I suppose we were fortunate that we've been able to hold off this long. Usually November is chilly from the start. It had been pretty nice, I suppose that was our reward for putting up with a colder than usual October. Anyway, here were are a few days from Thanksgiving. I spent much of the weekend preparing for the holiday. The stores were insane on Saturday. Grocery and home stores were complete chaos. Good news is spending should be up, I can't imagine people fighting the hoards to window shop. Also, cleaned a bunch. Steam-cleaned the carpets for what just might be the last time. We shall see.

As if my pre-holiday tasks weren't rockstar enough we also took an impromptu drive to Laughlin. We wanted Mexican food. It's warmer there. And Frank needed clothes. Frank made out like a bandit at the outlet mall per usual. It was only shoes he had no luck with, but success with clothes alone is pretty exciting. If we found shoes, too, the world might have stopped spinning. 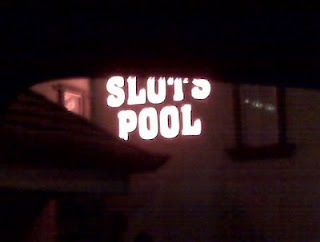 We went to the Belle and played our numbers for 15 games of Keno. Lost $20 at the bar VP, then went to Edgewater. Saw they had comics at 7:00 it was 6:30 so we bought tickets (at $10/each) it was cheaper than gambling. Saw two comedians and enjoyed the show. More laughs than other comedy acts we've seen in Laughlin. We went back to the Belle to check our Keno ticket and our numbers were on the board. Too bad our games had already ended that would've been $350. Instead, we won $5 from scattered hits. We put it in a dollar slot in hopes we'd snag a jackpot, but no luck. We took a drive by the old neighborhood, and then headed for home. Had a brief stop in Searchlight for Bowlingo, Frank also got a McRib just to gross me out, I swear. He ate and I giggled and snapped a photo of Sluts Pool. Yes, sometimes I am twelve.

Wrapped up the weekend by making dinner. Dug out the dutch oven and braised short ribs, also did a trial run of mashed potatoes. I've made mashed potatoes twice (I know, heresy for an Irish girl), once by accident -- delicious. And again two years ago for Thanksgiving -- fail. Failures won't be tolerated this turkey day, because this year I have an audience. I was told a potato ricer was key to fluffy potatoes. So, I went out and bought one. I'm happy to report my mashed taters were a success. The short ribs, however? Eh. Too much trouble for the end result. Stripsteak and others do them up far better. 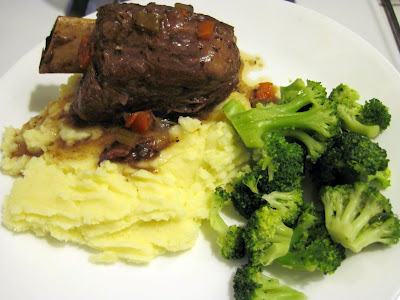 Salt and pepper ribs, then dredge in flour. Set aside.

In a large dutch oven, cook bacon over medium heat until complete crispy and all fat is rendered. Remove bacon and set aside. Do not discard grease.

Add olive oil to pan with the bacon grease, and raise heat to high. Brown ribs on all sides, about 45 seconds per side. Remove ribs and set aside. Turn heat to medium.

Add onions, carrots, and shallots to pan and cook for 2 minutes. Pour in wine and scrape bottom of pan to release all the flavorful bits of glory. Bring to a boil and cook 2 minutes.

Add broth, 1 teaspoon kosher salt, and plenty of freshly ground black pepper. Taste and add more salt if needed. Add ribs to the liquid; they should be almost completely submerged. Add thyme and rosemary sprig (whole) to the liquid.

Put on the lid and place into the oven. Cook at 350 for 2 hours, then reduce heat to 325 and cook for an additional 45 minutes. Ribs should be fork-tender and falling off the bone. Remove pan from oven and allow to sit for at least 20 minutes, lid on, before serving. At the last minute, skim fat off the top of the liquid. (Can also refrigerate mixture, then remove solid fat from the top.)
Posted by Kellee at 11:29 AM

I don't like potatoes much either (and I'm Irish-German, also sacrilege) but my husband does. I love my ricer - gets the best texture! Last weekend I made a version of shepherd's pie with sausage as the filling and sweet potato & butternut squash (riced) as the topping. Yum!