My internal clock wakes me at 6:30 most days. Sunday was no different, only my internal clock failed to observe daylight savings time. It was 5:30. I forced myself to snooze. All was well until a loud buzzing alarm went off an hour later. What is this? A drill? An earthquake? Is there a fire? I call the front desk to find out, maybe I should be mad-dashing down the stairs?! A few rings in, it stops. We must be safe. But we were now wide awake. We prepare for the day, and I seek out a breakfast spot. It's pouring rain so I choose Hollywood Cafe nearby.

We first stop at Safeway to purchase umbrellas. Half of San Francisco had the same idea, they were sold out. We were told to try Walgreens, but they wouldn't be opening for sometime. Instead, we decide to bear it, and dodge the drops as best we could so we proceed to the restaurant. No dining was available inside, but patio dining was available. Imagine that? Such luck. As long as we nestled together we were able to huddle under the overhang, and there was a heater to keep us warm. 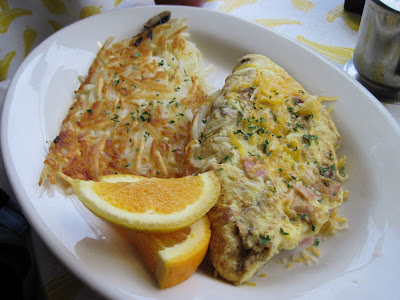 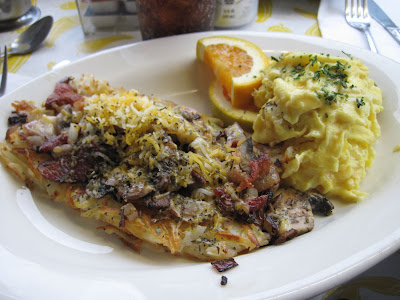 I had the special hashbrowns with two scrambled eggs. These weren't magic potatoes (couldn't be too sure, I'd been smelling pot around every corner, thus far), just special ones which meant they were topped with a mixture of bacon, mushrooms, onion and cheese. It was tasty and just enough to hold us over until the Ferry Building opened.

We noticed a few souvenir stores were starting to open so we walked around the corner to see if we could find umbrellas. We were in luck, there were a few behind the counter. Two please. Purple and blue, and covered with San Francisco. Just in case, we forget... I suppose. They did the trick. Although, they were mighty awkward. I had not used one since I was a small child. Even then, I tried to fly like Mary Poppins rather than use it as intended.

Now, able to face the elements we sought out an ATM, which was Burger King thanks to the convenience of ING. We had the Wharf to ourselves so we decided to walk around a bit. 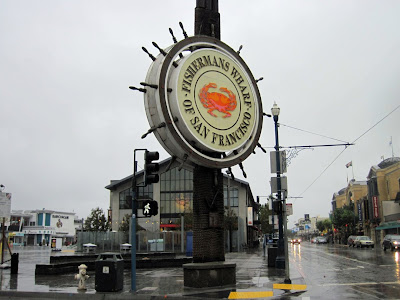 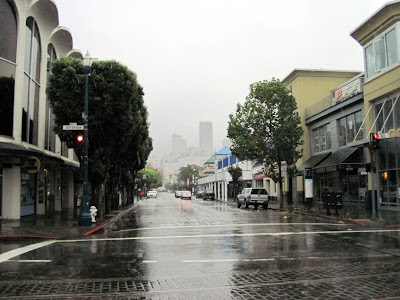 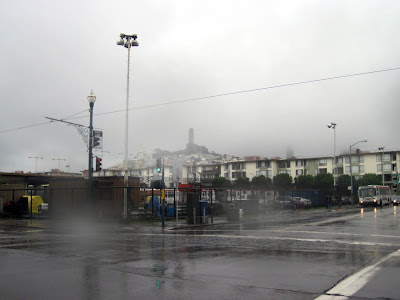 It didn't take long for the newness of the umbrellas to wear off. I have arthritis in my hands so they were cramping like something fierce. The winds picked up and caused the rain to blow sideways so my jeans were getting soaked, and they were soaked through from the foot up, as well, from puddles. I suddenly wished I had purchased a super cute pair of galoshes I spotted at Walmart a few months back. They were on clearance. Of course, they were, we live in the desert. But I certainly could have used them this day.

We had enough, boo hiss on the elements. We dashed back to the hotel and stripped off our wet clothes and climbed into the warm dry bed, until it was Ferry Building time.
Posted by Kellee at 8:37 AM