A Rainy Day in Paris

I headed out for the day. My first stop was for coffee at a café around the corner from the hotel. This was my only encounter with staff that seemed annoyed I wasn't able to speak French. I had read that it was impolite to grab a table. So, I asked for a table for one despite being surrounded by empty seats. I was given an eye roll and wave - OK, then, I'll take my pick. There was no menu offered but I let a local lead the way and I followed suit with an espresso and bread. Aside from the awkward start, it was the perfect little pick me up before wandering Musée d'Orsay. That baguette was the best all week too.

Once I knew it would be rainy all day, I figured a museum was in order. I opted to skip the line and buy my admission via tripadvisor ($17). It allowed me to enter at the C doors. The wait was just for baggage screening and metal detection. There were 5 floors, but only three were currently open with plenty to see. It was formerly an old railway station. It is really beautiful.

Prior to my trip, I learned of The Fork. Which is a free app great for booking reservations. I was able to reserve a table at Le Bistrot de Paris. It was a short walk. I was excited to try the escargot after reading reviews.


I was warmly greet at the door. My name was scratched off the list and I was led to my table. I was given a break from attempting to speak French, since my waiter spoke English. Though, he did seem to appreciate the effort. He offered to help with the menu (all in French), but I was able to navigate it and knew that I wanted the small order of escargot and the ravioli. He did assist in choosing a white wine. He recommended a sancerre. It was pleasant.  The snails were a bit tough and difficult to chew. Great flavor, though. The ravioli was extremely rich. While delicious, I was happy that it was a smaller portion. Dessert seems to be a given; I asked for whatever is best. Minutes later, an apple tart was placed in front of me. All in all, it was a nice find.

I walked back to the hotel to burn off some of the zillion calories I had just consumed. Like most cities, my favorite activity is to wander and discover. This walk did not disappoint.

I opted to nap before the 8:30 show at Crazy Horse Paris. I bought the show and champagne ticket from Tripadvisor since I was unable to complete the purchase on the Crazy Horse website. Getting to the venue took longer than expected. There was an issue with the train that delayed the trip. Then, the station was under construction and I had trouble finding my way. GPS wasn't connecting and I didn't realize I was headed in the wrong direction until after I had RAN three blocks. I arrived at the theater 5 minutes after showtime. Thankfully, I was still warmly welcomed and whisked to my seat in the first row. I thought the show was great. Plenty of eye candy. These ladies have buns of steel. Simply gorgeous. 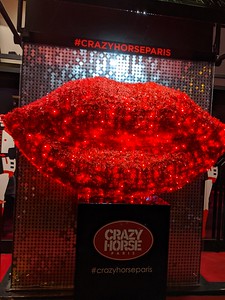 I had no difficulty finding my way back, but trains were few and far between. So, it still took longer than expected. The first full day was done .

Lovely pictures. Wishing you and your family a Merry Christmas and Happy New Year!

Thank you, I hope you had a magical christmas and the new year delivers joy, health and the best of everything!