I've had several meals at Andre's over the years, most recently was last week for Restaurant Week, and I've noticed a pattern... As of late, whenever we order from the menu, dishes are fantastic. However, when it's part of some sort of special the meal falls flat. Our dinner Friday night was no exception. Our friends joined us, so we had a table for four in the center of the room. Though, I prefer the cozy booths for two. Anyhow, the Restaurant Week menu offered a choice of nicoise salad or chilled tomato soup, chicken in crepes or short ribs and dessert was lemon cake with lemon sorbet.
The gougères that accompanied the soup were enjoyable, but the soup itself was a bit salty and I expected more of a concentrated tomato flavor. The short ribs were tender and lean, but were also overseasoned with salt. The chicken stuffed crepes were deemed the better dish. Dessert was heavy on the lemon, but otherwise unmemorable. 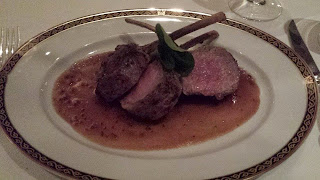 Frank, on the otherhand, opted out of the Restaurant Week menu and ordered carpaccio and lamb chops from the regular menu. Both were executed beautifully and were very tasty. He made the right choice.
I was saddened that our sole spring restaurant week meal was pretty pedestrian. It's disappointing because I know the caliber of food that Andre's is capable of putting out. We found the same, last year, when we took advantage of a travelzoo special $99 dinner for two. It's a shame because the special offers should serve as an opoortunity to lure you back; it's unfortunate that they are missing the mark.

My 40th birthday dinner was at Andre's in Monte Carlo Hotel. Is that where it still is? I just love your posts.

Yep! Thanks for the kind words!