Then, There Were Three

Our family has weathered a number of storms. It's true, the past few have been the most difficult, but we've stuck together through it all. The bond the three of us share will carry us through the hardest times and propel us into the future of countless joys.

In the days that followed our dad's passing, we were exhausted and stunned. There was only one place to dull the numb. Johnson's Beach was calling us home. It's where we spent a number of summer days. Nearby, West Beach was far more popular. I went a couple times with my aunt and cousins, but our parents were never ones to follow a crowd. They always opted for the path less traveled. I have no doubt it is where I acquired my sense of adventure.

Growing up, my dad spent his summers at my grandparents home in Chesterton, IN. He spent many of days at the beaches that dot the shores of the Indiana Dunes State Park. He was most fond of Johnson's Beach and we too would develop a penchant for it. 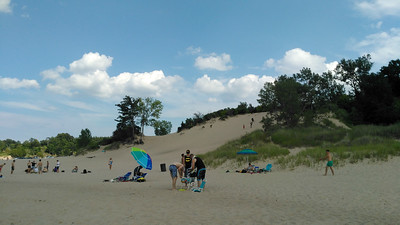 The dunes were unlike anything I had ever seen. Far bigger than any hills I had known. I'd struggle to run up as high as I could before my feet would tire beneath me, then, I'd fall to the ground and roll to the bottom while trying to tighten my smile to keep from eating a mouthful of sand. I brush myself off and try again. Rinse and repeat. 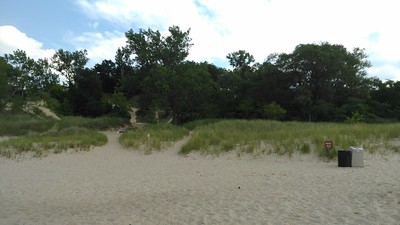 I loved it most when storms were brewing up sizable waves. Big waves were my favorite. My best memory was in 1990, my brother and sister were small so they stayed behind with family. It was an incredibly humid day so we went to the beach. As the day went on the waves grew bigger and bigger. It was a struggle to swim to the sand bar like we would routinely do. The waves were so fierce in the afternoon we were easily turned into pretzels. It was positively fun. We splished and splashed having the best time. Mid afternoon the skies turned dark and electricity filled the air. Our wet hair stood on end. It remains one of the wildest sights I've seen to date. The ominous clouds signaled that it was time to go. We grabbed lunch at the Lure which was tradition. It was there were learned a tornado ripped through Plainfield, IL. It is the only F5 tornado that has struck the Chicagoland area. Watching the news coverage that night I recall feeling guilt that the storm delivered us the best of times, but the destruction was devastating for so many.

Returning to Johnson's Beach proved to be more challenging that anticipated. It had been about 18 or 19 years since I had been back. I took Frank one summer just before the 4th of July. After buying fireworks at the nearby stand, we had a spontaneous day at the beach. Mike and Amy had been more recently, but it had still been a few years. Our memory isn't as vivid and the trees and brush have certainly grown over time. We eventually found our way. The dunes aren't as big as I remember them - the bias likely comes from being surrounded by mountains these days - it seems the beach has eroded too. Having less shore made it far more crowded than I can ever recall it being. The water was calm as could be, and painfully cold, to me. Though, others didn't seem to mind. 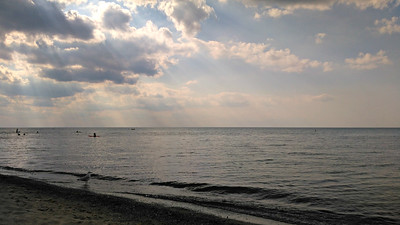 That afternoon the three of us we sat in peace and reflected on the memories that were born here. Ones that will live on, and forever, be cherished.