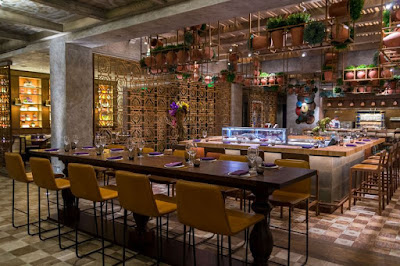 I hadn't heard of Chica until Three Square released the menus for Restaurant Week. It opened in the space that was formerly Daniel Boulud Brasserie about six weeks ago. It's a partnership between Lorena Garcia, of Top Chef Masters fame, and 50 Eggs that operates the neighboring Yardbird. The $40 dinner menu sounded fantastic. I was easily sold when our friend made the suggestion, I quickly booked a reservation for six. That was a couple weeks ago.

Last night, our group arrived promptly, I checked us in. The hostesses fiddled with their system for a few minutes before telling me that they'll grab us when a table is ready. About five minutes later, we were led to a large bar height table shared with another group. Bar height dining is terrible for short people. Our friend requested another table since the dining room was far from capacity. One large table was free, but the hostess said it was reserved for a group at the bar and nothing else was available. We reluctantly took our seats. We gazed at the menu and took notice the restaurant week menu wasn't provided. No waiter or waitress appeared for us, or the group at the other end of the table. We were left to graze on that line of how much time is acceptable to be greeted after being seated.

Then, the manager approached the table, he confirmed that we preferred to relocate and said they were preparing a table for us. Perfect! Or, so, we thought. We waited and waited. We had nothing but time to study the fairly empty dining room that really didn't fit the expectation of a lively Latin American restaurant. The atmosphere was subdued with music that was a little too loud and a giant television at the entrance that increased the noise of the room that felt simply unnecessary. It felt cold and industrial with many grey walls and, stone and iron work. We were sandwiched between the bar and unattended ceviche counter. The only pops of color noted were the yellow chairs and purple napkins. Enough time had passed that we were setting odds on what would happen next... We'd be moved, a waiter would appear or we'd walk out? Smart money was on our departure.

With our patience depleted, we left. There are too many options literally steps away to continue to waste our time. The food could be delicious. I may never know.