When Frank and I learned that Al Cielo would be closing while we were visiting Xpu-ha in February, Frank immediately started seeking out a new beach. Since the beaches south of Tulum in the Yucatan were duds (to us) we tossed out the idea of exploring Cabo or Puerto Vallarta. The choice to check out Cabo was easily made. Traveling there is a little easier (though, more expensive), it's not as humid, and we love the desert; in Baja Sur, the desert meets the sea in the most splendid way. We were intrigued. I think before we even landed back home from Cancun, we had it settled. We'd fly to Cabo rent a car and drive the coast skipping from city to city to find one we liked best. It was just a matter of when.

As soon as Frank wrapped up March Madness we were in route to Mexico for the third time this year. I secured the shortest & cheapest flights ($275pp roundtrip) possible by flying American Airlines via Phoenix. We'd always burn a full day traveling to the Yucatan so it was wonderful to leave at 6:30am and arrive before noon. Prior to the trip I booked a 4WD SUV for $151 on Orbitz. It was supposed to be a Toyota 4-Runner or similar, but when we arrived there wasn't a single 4x4 vehicle to offer. They had a Jeep Wrangler than would be returned later that evening, so we worked out a deal to accept the Kia Soul for now, and we'd swap it out for the Jeep the following day. The plan worked out just fine, accept that the Jeep was the poorest excuse for a four wheel drive vehicle. Suffice it to say I wish we kept the Soul. I never in a million years would expect to utter those words, but there you have it. I'll share more on that later. 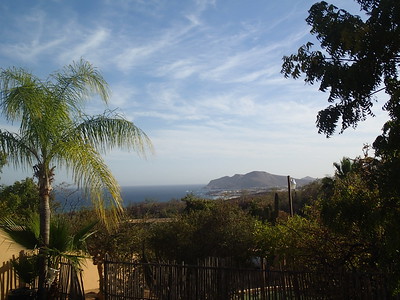 Prior to planning this trip, I never knew that there were two Cabos. I can't be alone in this, can I? To keep you on your toes, both, Cabo San Lucas (CSL) and San Jose del Cabo (SJD) have airports. We stayed smack dab between the two, we booked an Airbnb for two nights. It was located on a hillside not far from Chileno Bay. There were three rentals, plus the hosts main residence. At the center of the property there was a large palapa with bar and outdoor living area beside the pool, which was flanked by a bocce ball court and gardens. It was quite lovely. As an added bonus, we were the only guests so we had the run of the place and the roof top terrace; which was great for sunset. 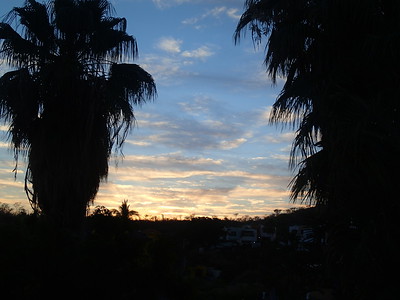 We played tourist on our first day. We drove over to Cabo San Lucas. We decided to grab a bite at Guacamaya's. We ordered a variety of tacos - marlin was the favorite, a napoles tostada and we finished with a churro that was pretty spot on. I must be used to fish tacos in San Diego, because all over Baja (Norte or Sur) I was served the fish naked. 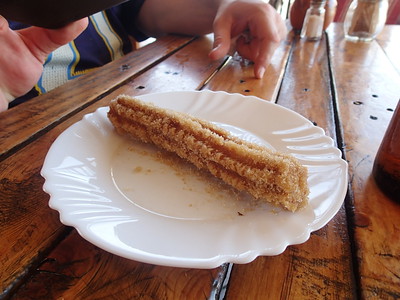 I was a little familiar with the times that the cruise ships are in port from friends that had cruised to the area. Late afternoon was an ideal time to take a Land's End tour since most of the cruise crowds had cleared out. We walked to the Marina to check out our options. Frank negotiated a deal with one of the glass bottom boat operators. Said and done, tip included it was about $30. The first quote was triple that. We thought we might have gotten a private tour, but just as we left the dock, we circled back to pick up two other groups. A family, and group of American ladies. The ladies asked for cerveza, our captain kindly stopped at the dockside market, and then we were on our way. I thought we were all taking the tour, but it doubled as a water taxi. We made a detour to drop off the ladies at The Office. 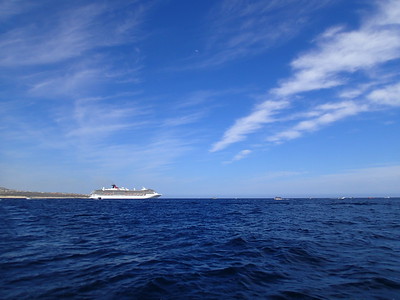 Then, our tour began, we saw the popular snorkeling area and diving rock. There were loads of fish in the area (I couldn't make much out through the glass window, but there were plenty alongside the boat), we cruised by the arch, Lover's Beach and Divorce Beach. The water in the bay was pretty calm, but on the Pacific side. The waves picked up and it only took moments for seasickness to wash over Frank. Thankfully, we didn't stay long, and it was smooth the rest of the way back so he was only uncomfortable for a short bit. 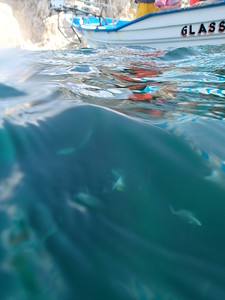 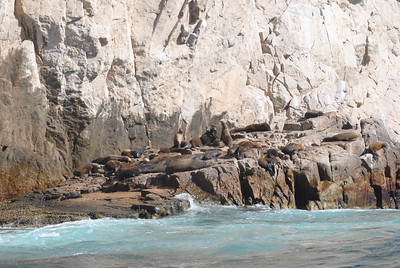 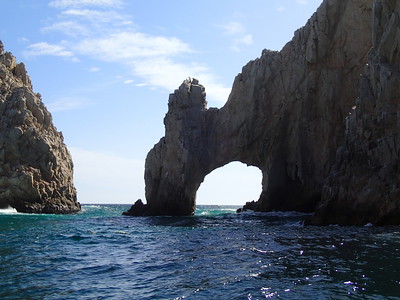 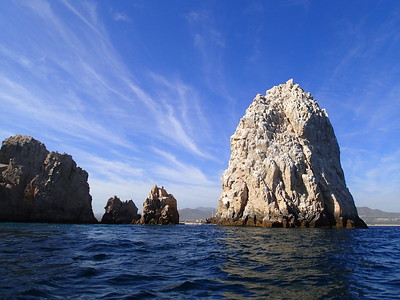 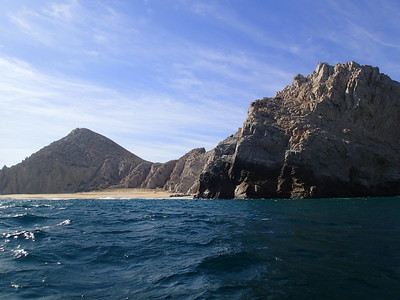 After the tour, we grabbed a few groceries and went back to the house. Frank swam a bit, I relaxed pool side. A cigar and beer (or two) might have been had. Later, we dined at a Argentinian steakhouse, Chumayo. We knew it was a hotspot and reservations are recommended, but we were dining late and took our chances. We waited at the bar until a table opened up. They make a fantastic margarita so I didn't mind the wait one iota. The restaurant offers moonlit dining in an open courtyard. The menu is pared down to offer the best of the best. I always appreciate that. We chose the grill for two, but instead of a bottle of wine we opted for a couple margaritas. We also added the creamy onion soup and empanadas for starters and ended with a crepe & berries. Go big or go home, am I right? 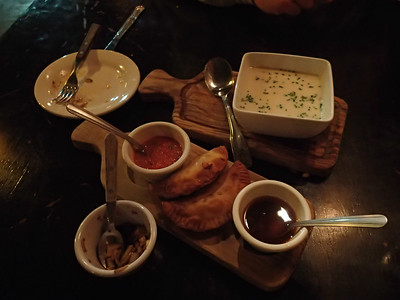 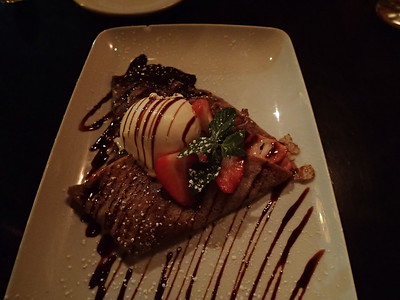 We were in heaven. We ate like royalty. The meal was superb. They are known for the beef rib, and it is very good, but it was the flank steak that blew us away. It's not a cut we typically enjoy, but this was so tender and flavorful. Wow.

The next morning, we exchanged our rental car and we thought we'd check out The Hangman in San Jose del Cabo. Unfortunately, it wasn't open til dinner. We found another spot in the center of town, but parking was too difficult. 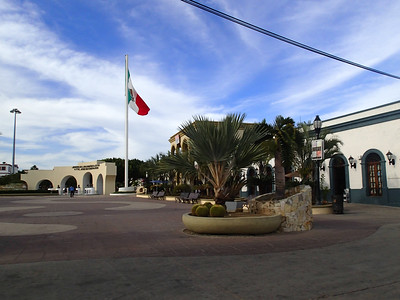 Our third attempt was just outside centro, Tacos Rossy. We were pleased to find chicharrons on the menu, but they weren't as tender or flavorful as what we get at Mariscos Playa Escondido, here, at home. The tacos were fairly unmemorable.

Next stop was a tour of East Cape. We planned to drive out to Cabo Plumo, but other plans unfolded. We were at Playa Zacaritos, and Frank has been itching to drive on the beach so we took the Jeep out into the sand. 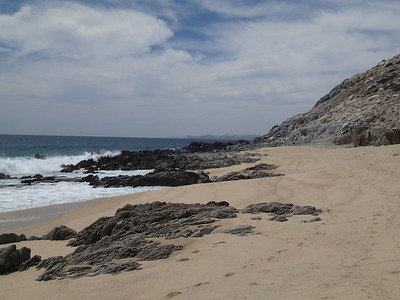 Our fun was cut short when we got stuck. 4WD without lockers and balding tires rendered this Jeep useless. Frank is a skilled driver and we've gained all sorts of experience getting out of jams for all of our offroading adventures, but airing down wasn't enough. We found rocks to provide traction. It worked an inch at a time, but it was very slow going. We made a good effort, but we were never going to make it up the last leg. I sat in the Jeep to cool down and Frank walked up the hill in search of help. He was fortunate to find a crew of five that were working at one of the houses that overlooked the beach. The kind amigos, gave us the push we needed to free us from that final stretch. Then, they invited us up to the house to fill up the tires. It was pretty isolated with no traffic coming or going so I thanked our lucky stars that Frank found them. Driving on sand? Totally overrated. In a RZR, though, it'd be kick ass. I wish we had ours in tow.

We were tired, thirsty and a bit hungry after that ordeal so we grabbed a snack at Buzzard's Bar & Grill. Pacifico never tasted so good! We ordered nachos and poblano & onion rings. We chowed on those and chatted with a couple from San Diego. They, too, had been traveling to the Riveria Maya, but decided to switch it up given the proximity to home. We bailed on Cabo Plumo. I was sore and had little desire to be tossed around for the next few hours on the unmaintained beach road. We hung out on the beach before turning back. If you look real hard you'll spot the Jeep. That's as close to the sand we got for fear of another sticky situation. 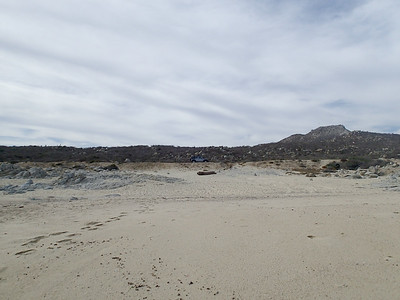 The sea and sand we encountered in the east cape was too rough for our liking so no paradise found. We rested back at the house until dinner. We opted to return to Cabo San Lucas it was more easily accessible, few traffic lights on the highway and less congested overall. La Catrina is nestled in between the beach resorts not far from The Office. It's known for its flaming cheese and tableside guacamole. Twist my arm. We started with those and a round of margaritas, then chose the seafood chile relleno and carnitas for our entrees. All was good, but the star was the flaming cheese. Sure, it's gimmicky, but it takes con queso to a whole new level. 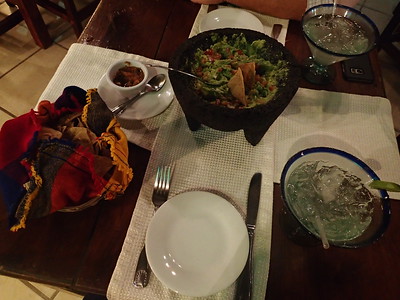 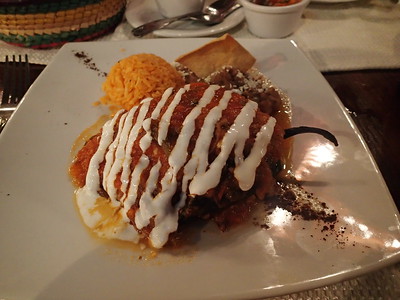 We took a short walk after dinner, then turned in so we'd be ready for our next adventure in La Paz.