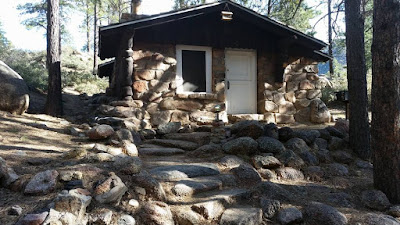 And I'm not talking about WiFi. This weekend, we unplugged and went off the grid (well, except the few with Verizon - they truly have the best coverage) at Hualapai Mountain Park. Frank and I have been a few times before, but this time we had a large crew to join us. Our group of 22 was spread out in four cabins and two RVs. With only a few of us having been before, everyone had fun exploring, enjoyed the crisp air and wildlife. Nights were spent under the stars around the campfire, and the day was filled with RZR rides, riding bikes, hikes and a visit to the park.

There were six RZRs among us. The first ride was to the Gold King Mansion, Frank was the trail leader. Having been a couple times, I stayed back at the cabin and gave up my seat to Nick. Meanwhile, I prepped crockpot chili for lunch, fixings for dinner, and kept busy with girls, Amy and Jeff. When they went down for a nap, I read a book under the shady tree. It was delightful. The gang returned for lunch, but two RZRs were down for the count. Both suffered A-Arm damage. The group for the afternoon run shrunk. Four RZRs headed out for the Boriana Mine. I tagged along for this one. The trail used to be quite smooth, with the exception of a few rock gardens where the trail had washed out. Now, it's deeply rutted in several areas and more loose rock and boulders to dodge. The heavy rains have bolstered the desert flora. Bright wildflower blooms were such a treat and it was so lush, well, as much as the desert can be. Unfortunately, only half of us made it to the mine. The other two RZRs turned back when the A-Arm bushings were toast on one.

While at the mine, we stopped to feed the goldfish. It always surprises me how they survive year after year. After a full day of riding three rigs were worse for wear and three were unharmed, but most importantly everyone returned safe and sound.

When we rolled up to camp, I had to giggle at the teenager I spotted with cell in hand by the ranger station struggling to connect to WiFi at the Ranger's station. I was so relieved that all the kiddos in our group survived without electronics and the internet. They played. Just as kids should. It was wonderful. I printed off a scavenger hunt I found online, they formed teams and ventured off. 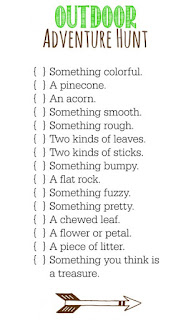 Hilarity ensued when a cactus was brought in as something smooth. Sure, it smooth, if you don't count the two to three inch needles protruding from it. It was all good fun. Even the littlest ones got a kick out of collecting rocks and pine cones.

I cannot believe we've been coming to Hualapai Mountain Park for nearly five years now. We've tent camped and stayed in the cabins. Camping is fine, but I do love the luxury of running water. If given the choice, I'd chose a cabin every time. This time, our group booked cabins 15, 12, 11 and 2. #2 is set back aways, it's all stone and quite nice. I especially like that it lacks the bunk beds that most offer.

This trip I decided I'm too old for that top bunk. The first night, we had the heat blazing and I woke completely soaked from sweat. It was slightly terrifying to see wood inches from face. Too claustrophobic and too close to a casket for comfort. Hobbling down the ladder, with a full bladder was not fun either. Next time? A cabin with no bunk, Please... or I'll bring an air mattress. All said, it was a great getaway with family and friends.