It occurred to me that I never shared about Frank's latest hobby, smoking meat. He's a natural when it comes to grilling. So, I no doubt he'd jell with smoking meat too. After our last trip to Austin - in November, seems I never mentioned that either - he was eager to test his skills as pitmaster. He and my dad, dusted off the one my brother bought over a year ago that was still sitting in the box. It got the job done, but it was not the right tool for the job. Still, he managed great results with a brisket. You'd never guess it came from Albertson's. 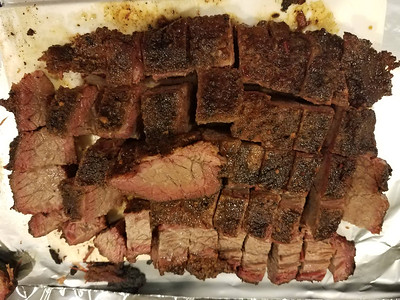 Sometime between his birthday and Christmas he chose to buy his own on Amazon with an offset vertical charcoal smoker. It is this one, but the price has gone up a bit since we purchased it. It was delivered in two days, you gotta love Prime. And his smoking game was immediately upped. He has since toyed with various wood chips, injections and perfected his technique.

He's had success with brisket, meatloaf, ribs, lamb and pork belly. The star, though, is the pork shoulder. More often than not his have been better than what's offered at the best places around Vegas.
Posted by Kellee at 5:00 AM