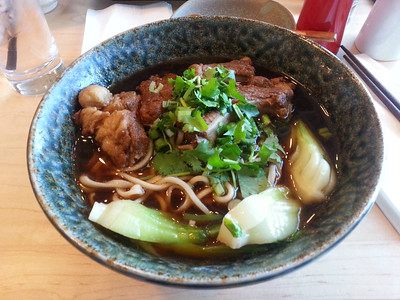 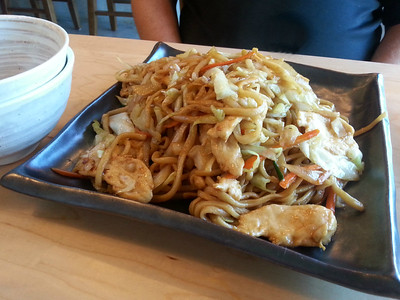 I dig noodles. I pretty much enjoy all shapes and sizes, I suppose you'd say I like oodles of noodles. I'm familiar with Italian and Thai, but Vietnamese and Japanese are pretty great too. One that I'm rather inexperienced with is hand pulled Chinese noodles. That's just what Shang Artisan Noodle specializes in, it's a new eatery at Decatur/Flamingo in the same complex as Capriotti's and Yonaka. The interior design is clean, minimalist and the focus is definitely the counter where the chef skillfully works balls of dough into layers of noodles. Service is attentive and the menu offers a few appetizers and noodles presented a few different ways. You also have your pick had hand pulled or knife cut noodles. I found it a little odd that they do not offer diet soda, but the watermelon infused water is satisfying.

I went with the Pork Rib with Hand-pulled Noodle Soup ($8.95) and my brother opted for the Chicken Chow Mein ($7.99). Both were brought to the table piping hot, his was likely the best Chow Mein I've had, it's not typically a dish I enjoy, but fresh noodles are apparently enough to sway me. Well, that, and the flavors were clean and not too salty. The same went for my soup, the savory pork broth was almost beefy like french onion and quite fragrant from the scallions. The bok choy was perfectly tender, the noodles were al dente and scrumptious. It was a little unfortunate that the pork rib was a bit chewy. Though, still enjoyable. I'm eager to try another dish and I'll definitely check out the knife cut noodles to see how those compare. It's a great find, especially as the weather turns a bit cooler.