When I want to run away from it all, I envision Xpu-ha Beach. It's my happy place. The turquoise waters and ocean breeze whisk away any worries, relaxation sets in and you melt into the powdery white sand. Days spent there are simplistic and perfect... and never long enough. Time slips into the sea. I'm so happy we found this paradise ten years ago when we were desperate to escape the crowds in Playa del Carmen. Fate must have led us to Al Cielo. We've seen this small four room hotel evolve. Even though, it doubled in size a few years back, the changes have been welcomed. They were very busy with improvements to the original hotel over the last two years, adding a sundeck, sliding glass doors, ceiling fans and more. We learned that they have plans to expand again, they will close in August and September to build two new structures which will provide 16 guestrooms in all. I admit I cringed a little - that's 4x the size of how we found it! I like our secluded paradise. As much as I don't care to share, I know it's best for the owners and staff. I'm confident that it will remain a gem.

I appreciate the little details that make our stay extra special like fresh flowers and decorated bed.

The restaurant menus have been revamped a bit, again changes seem to be for the better. Frank would argue that they shouldn't have messed with the yogurt. They present it beautifully now with fruit. He'd prefer to limit it to granola and honey. They happily accommodate requests so there was no need to fret.

Breakfast is included, previously it had been continental, but now you can order what you'd like. They have American and Mexican specialties: omelet, mexicana eggs, pancakes, huevos motuleños & rancheros.

I took a liking to the pineapple and chaya juice. I had no idea what chaya was and when we inquired our waiter brought a plate of the herb. It has a flavor of its own, but it reminded me of a very mild basil.

We had a great dinner too, the catch of the day - grouper - with cochinita pibil raviolis and profiteroles.

One of my favorite touches is the snacks & cocktails served on the beach. Each day between noon and one o'clock, they send out a special treat. I looked forward to the introduction to different cocktails and small bites. I was instantly hooked on the watermelon margarita and the mushroom crostini. We also had them whip up fish tacos and guacamole, which were great!

Let's not forget about that pristine beach. The cozy palapas keep me safe from the blistering sun and allow us relax in our personal cacoon, with the most amazing view.

When we feel ambitious we take a stroll, play in the waves or snorkel. We discovered an amazing reef so close to the hotel. We didn't bring the camera with us, but next time, I'll show you how spectacular it is. Frank ventured out to further out reef and met a friend.

I was so relieved I wasn't with on this excursion. He's an awfully big sting ray. Of course, not all friends live under the sea. We had regular visits from Estaban. How lucky is he? Living the life in Xpu-ha. 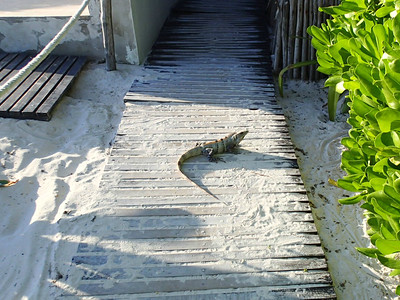 Next up, our time spent in Akumal.
Posted by Kellee at 6:00 AM

It's been since 2010 since I have been to Akumal but have ventured to Cabo twice in the last year. I'm really curious to the changes in Akumal and the Riviera Maya in the 5 years.

I didn't notice many changes in Akumal. La Buena Vida put in a pool, but that's all I noted. We didn't go by Akumal Bay this time, so it might be different. Tulum was far more bustling than ten years ago. Playa del Carmen is booming! I cannot believe how much has changed in two years let alone the past ten. It's unreal and construction is still in full swing. 10th is now lined with bars and restaurants, and bike lane. So many apartments and new hotels.

How have you liked Cabo?

So happy you had a wonderful trip. I love the pictures. Thank you for sharing your experiences with us who live in the blowing, snowy cold.