Mexico, how I've missed you!

When leaving on Tuesday we tried to park at MGM's valet like we usually do, but the hotel was packed because of the rodeo. Insanely packed. We were stuck for a good ten minutes. I began to wonder if we'd make our flight. Finally the duallys parted like the red sea, and we were able to pass thru the thru-lanes. We valeted at New York New York instead. Cab fare was no worse than from the MGM so it's a great alternative.

Security at the airport was a breeze. We waited a bit at the gate, and then boarded, our seats were in the front of the plane so we were in the last zone to board. I began to fear we'd be forced to check our bags at the gate. Minutes later, my fears became reality, the overhead compartments were filled. The last 30 of us, had to check our bags. They boasted the service was complimentary. I was not thrilled. I had just packed 7 days worth of clothes, shoes and toiletries in two small suitcases for nothing. I had visions of lost luggage. I had a meltdown. I insisted I at least pull out Frank contacts and glasses those were things I knew could not be replaced. I reluctantly checked the rest of it. They confirmed it would be at our final destination. It better be, I muttered. Big & Tall is hard enough to find in the states, I couldn't fathom finding clothes for Frank in Mexico.

Our red-eye to Charlotte was uneventful. We were not able to sleep, however. We thought we'd catch a few winks at the airport during our layover, but there was not a chance. The gates were freezing, they were blaring christmas music and there was no place to rest your head comfortably. It was misery. I tried to keep warm by using the laptop to generate warmth, but my eyes were so tired from being up all night I couldn't stand to look at the screen. I broke down and bought a pashima. I figured it would keep me warm in the airport, Frank could use it as a pillow on the plane, therefore, I was able to justify the cost. Best $10 spent. Soon, we boarded and we were Cancun-bound. We were so exhausted, we put the pashima between us and leaned against one another and finally were able to sleep. It was short-lived, about an hour, two at most, but it was enough to function.

We landed in Cancun, and we were reunited with our luggage. I was so relieved. I think I even uttered a "Thank you, god". Immigration and customs was quick, we found our rental car shuttle and we were off to collect our car. We had an itty-bitty thing. Frank and I sat shoulder to shoulder, and he practically sat in the back seat to fit. It was a clown car. Absolutely hilarious. One with manual transmission, no power steering or radio. It did have door locks so we were riding in luxury. We zipped down the 307 toward Playa Del Carmen.

A bit odd to see one lonely wind turbine. 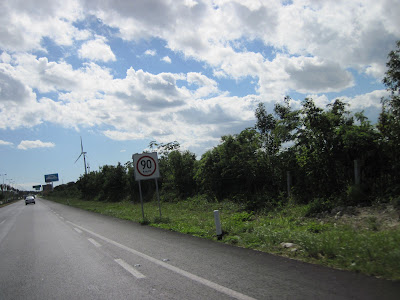 We're cruising along and Frank realizes we're on dead E. He neglected to check the gas level at the car rental, we had already blown by the stations around the airport. I was nervous. There used to be very few after that... we hoped for the best and managed to run on fumes until the next station. 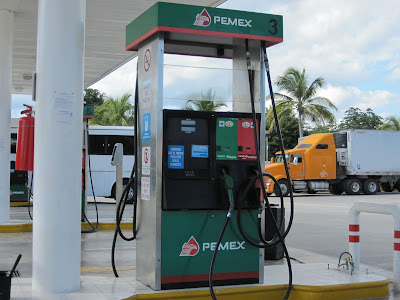 Next problem, we have no pesos, only dollars. Fortunately, for us, the attendant agreed to accept our US currency. We probably overpaid, $30 to fill the clown car? But it had a full tank and we avoided crisis. We continued down the highway. 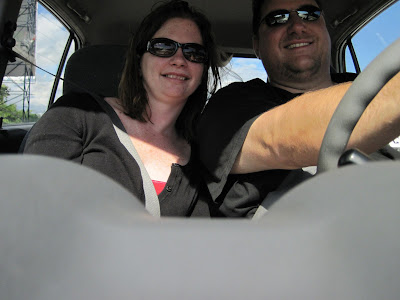 You encounter funny shit in Mexico, stuff that would never fly in the States. Like babies without seatbelts let alone car seats, kids smooshed between two adults on a scooter, a dually with dinky little tyke wheels. Stuff like that... 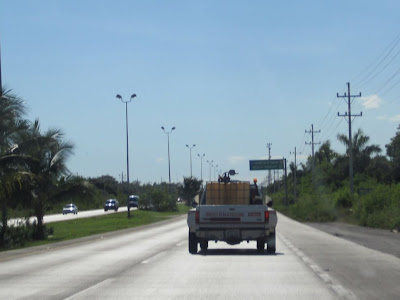 Construction, though, is a riot. OSHA would be beside themselves. Safety is not a concern. 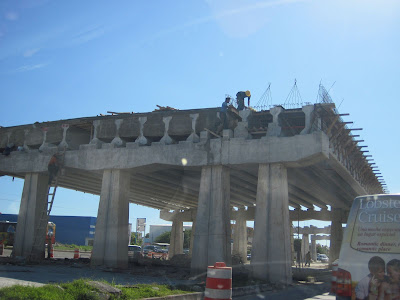 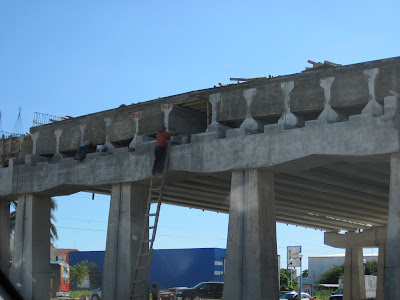 That's the overpass in Playa Del Carmen. It causes delays now, but it'll be great once it is completed. We headed straight to Walmart. I had been told they had the best prices on cigars. This was not the case. It might have once been true, but they were the most expensive we found. We did hit the ATM, and we stocked up on agua, cerveza and coca-light. So, it was a worth-while stop. We had lunch at El Fogon, I had a bad address for the place so we walked several blocks in search of it -- it was right across the way from Walmart, but we went in the wrong direction. 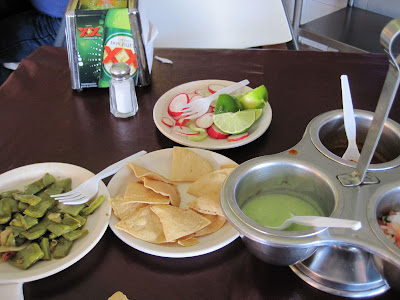 I had my favorite, Tacos Al Pastor. These were the best yet. I had them with queso, and it made it really special. 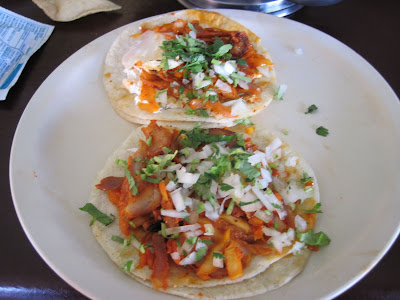 Frank had a Chicken Torta, the bread and cheese were really good, but the chicken was bland. It would've likely been better with another choice of meat. 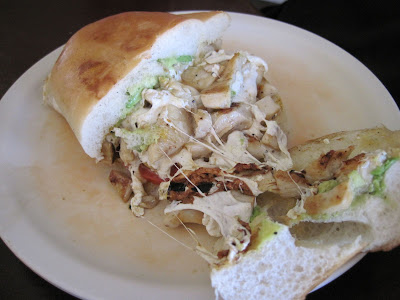 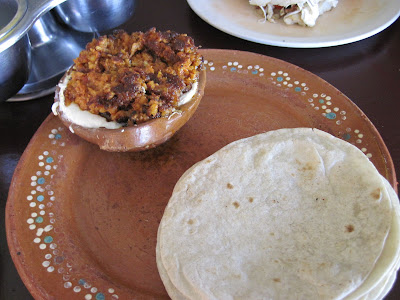 This guy works hard manning the grill, he's damn good at it, too. 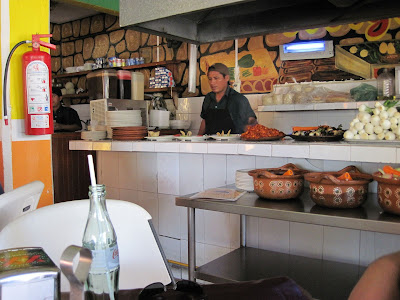 After lunch, we drove the rest of the way to the hotel. We were impressed at how nice the roads had become, it's very much like an American highway... well, if you disregard the topes, policia and military and random Mexicans all about. 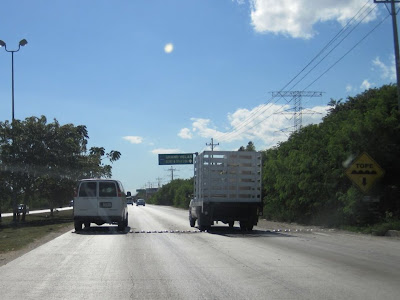 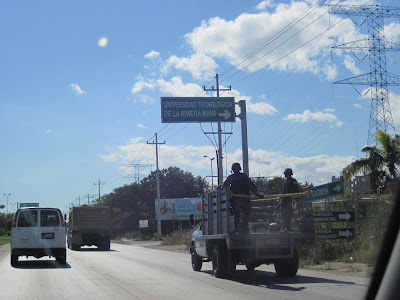 We get to the hotel! Ahhh! Here, at last!! I was immediately shocked by how much the plants and bushes had grown, I failed to notice the changes to the "hotel". They moved stairs to the upper floor rooms, expanded the bathrooms to include tubs, the re-did the roof of the restaurant, expanded the kitchen and moved the bar. They brought us welcome margaritas, we got settled, threw on our suits and hopped in the water.

I'm so pale, I blend into the sand on the beach. It's like playing "Where's Waldo?", too funny. 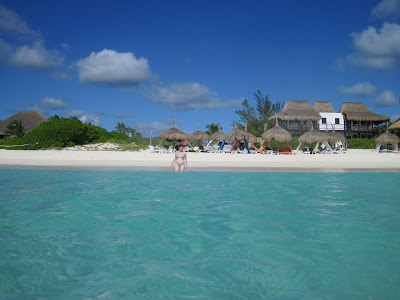 The water was a bit cool, but crystal clear, just as we remembered it. 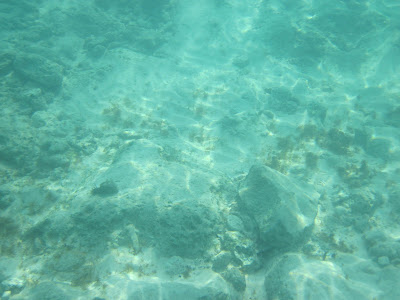 The beach was also just the way we like it. Deserted. 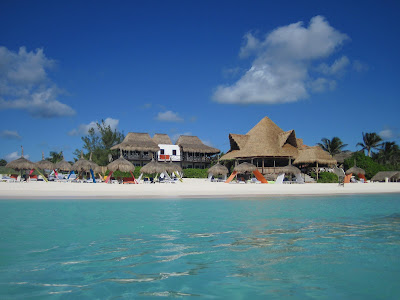 Yes, we had arrived!! 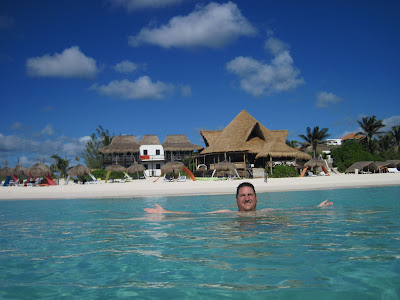 It was so fantastic to be back. After our swim, we went up to the room to unwind a bit. Then, we had dinner that night at the restaurant. We drank Modelo Especials, had clams and crab salad, followed by garlic confit shrimps and whole red snapper. That fish was prepared to perfection. It was so darn tasty! I was on vacation. I did not bring my camera along for this meal. Trust me, it was excellent!

We retired to the hammock, drank Pacifico and listened to the waves crash until it lulled us to sleep. I woke some time later from a chill. We went inside and slept til morning.
Posted by Kellee at 8:01 AM