From La Paz, we were well situated to experience the small villages that spread across the eastern Baja peninsula. Calm crystal clear water stretches for miles on the shores of the Sea of Cortez in this region. We took a day trip to explore Los Barriles, Punta Pescadero and Buena Vista. Not knowing what to expect, we were quite pleased with the condition of the roads - we covered many miles in Baja Sur and I only minded the dirt road in the east cape that leads to Cabo Plumo. Roads in and out of La Paz were better than most in the states and WAY better than those in California. Open range is more common than not, so keep your eyes peeled and be mindful in the dark or when visibility is low. We saw cows, horses, and goats; they could cause traffic to halt at a moment's notice. 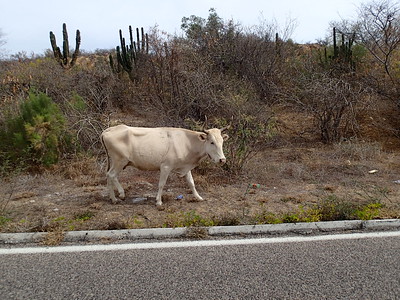 Buena Vista and Los Barriles are two seaside villages that have strong expat communities. Things move slowly, here, even the cows. There are no big box stores so it's full of charm and it feels rather remote. Small restaurants and bars dot the coast and line the main drag. But it's mostly private residences and roaming livestock. The area is very friendly to off-road vehicles. Paradise for ATV and RZR fanatics; it would be the best way to get around. Aside from that, there wasn't too much I found alluring. Mostly because the beaches we saw in the area had more rocks than sand.

We continued on the rugged beach road and checked out the neighboring Punta Pescadero Paradise Hotel & Villas. This area is carved into the cliffs and the view was breathtaking. We wandered a bit before locating the restaurant to survey the grounds. The resort is serene and secluded. Like the restaurant and bar, the majority of the rooms face the sea. The beach area is on the smaller side, but completely cleared of rocks and reef can easily be seen from the outdoor patio. While waiting on our lunch, we struck up conversation with a couple from California that were return guests. They said the snorkeling is spectacular. Manta rays, whales, and dolphins are often sighted. I wouldn't mind returning and staying a night or two at the hotel. I hear when the roads are washed out, it is only accessible via the onsite private airstrip with flights from San Juan del Cabo. Our lunch was tasty, but long term the menu would grow tiresome and expensive. The fish carpaccio and chicken salad suited us just fine for our brief visit. 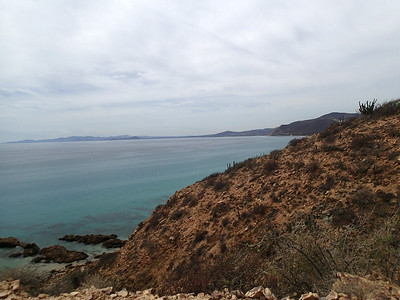 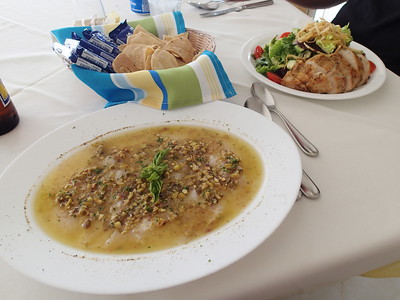 We stopped at one last beach area at the base of the cliff before heading back to La Paz. It too was too rocky for us to enjoy. But it was easy to see why the rocks were such a popular building material in Los Barriles. 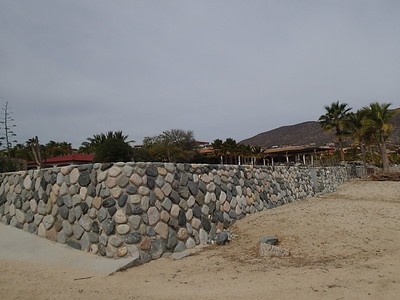 What could have been done as another day trip, we made an overnighter by staying in La Ventana. It's location served as a prime spot to see the sunrise. We were wanting to cross off a bucket list item of seeing the sunrise on an east coast and watch it set on the west coast on the same day. This was an easy feat, since it is only 1.5 hours drive between La Ventana and El Pescadero. I chose an Airbnb that offered a roof top deck that was perfect for enjoying the sunrise. Peak season is from November to April when conditions are ideal of kite boarding. In fact, it is known as one of the top locations in the world for this sport. The season has just ended so it was rather sleepy during our stay. We had the place to ourselves despite having several rooms for rent. Fine by us, we enjoyed the solitude.

Lunch, this day, was at Marlin Azul. Everything is made fresh to order, the enchiladas I ordered were the best Mexican food I had during the trip. We pondered on returning for dinner, but opted to check out Central Playa, a dive bar that caters to kite boarders. They make everything in house and avoid any Mexican dishes so they don't infringe on local businesses in the area. We played shuffleboard on the longest table I've ever seen while we waited on our pizza. 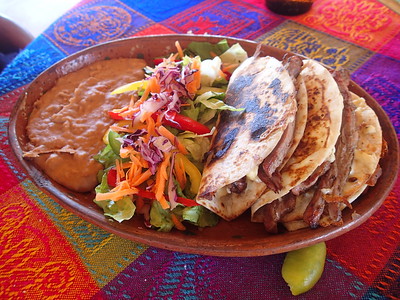 La Ventana and El Sargento are popular destinations to purchase retirement homes, second homes, land, and investment properties on the cheap. The two towns span about five miles. The primary industry is fishing, there are a few restaurants & an OXXO, but only a handful of businesses in all. So, it's very low key. We took a self tour to view raw land we've seen online in El Sargento. It wasn't for us, but it's easy to see why others are enticed by it. The area beaches are pristine, but if I'm being picky I'd say the sand is too gritty. However, the view from punta arena de la ventana with island Cerralvo in the background is simply stunning.

The days are lazy in these parts and the nightlife is even more quiet. We spent a great deal of time soaking in the view from the rooftop deck. We were mystified by these dark patches in the water. Were they whales, schools of fish or manta rays? I'm still not sure. The patches were pronounced at dusk and dawn. I wished I had binoculars for a closer look.

After pondering those patches, a vibrant amber spread across the sky as the sun peeked over the horizon. Needless to say, the sunrise did not disappoint.

Shortly after we hit the road for adventures on the Pacific Coast.