When we decided we were ready to finish the backyard, Frank called several landscapers and contractors for quotes. We had dreams of adding a french door to the kitchen and large slider to the great room that would allow for bringing our indoor living outdoors. It was a bit more than we could chew, so we scaled back the project omitting those items for the time being. We were down to two landscape companies and decided to pull the trigger with one that would complete all work themselves. However, when it came time to signing on the dotted line they went AWOL. They would not answer or return calls and no one was available when we went in person.

Back at square one, we called out Showready Landscape. We had a quote the same day and they started a few days later. To further seal the deal, the business card had a horse on it - my mom loved horses - I couldn't help but take it as a sign that it was meant to be. It took three days to complete. They were timely, accommodating and did great work at a fair price. We were thrilled.

On day one, we also had solar panels installed to heat the pool. Adding the panels has made a huge difference already in our pool season. Jeff and the kids were swimming on St Patrick's day. I need the water temperature to be at least 85 so it took a couple more weeks for me, but I've been in the pool more times than I can count. Since June, the temp has been holding steady at 91. Sounds steamy, right? While it is warm, it feels just right when the mercury rises 110+ or maybe we're all cold water wusses at my house. Whatever the case, I love it. 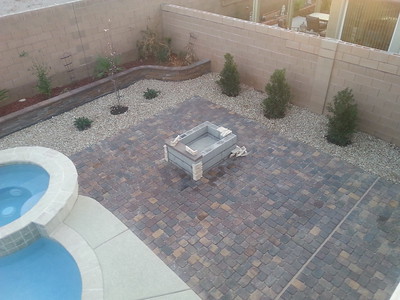 Much better, right? I know we don't miss the grass one bit! The fire pit is great for winding down on cooler nights with a beer (me) and cigar (him). We purchased fire glass from Amazon it was quite a bit cheaper than buying local and they offer a wide variety of colors. We chose blue to mimic the water of the pool and also to pay homage to are favorite television show. Yes, we hide our blue meth in the fire pit. We chose the pavers that were a match to the front of the house, stone surrounding the fire pit was tying into the rock and flagstone surrounding the pool, and the top was to the blend with the pavers and the retaining walls. Frank oversaw the project, I was sick as can be. Those few days were a complete blur. All things considered, I think it came together well. We still need to find a patio set to complete the look. I've been looking all summer; there is one we like, but holy moly, nice sets really do run high. Maybe, we'll snag and end of summer special?

Your home and back yard is lovely!

Gorgeous. You guys are living the dream!

Hope all is well with you guys...it's been 11 days since your last post!

July got away from me - I blinked and it was over. All is well, just busy. Thanks for checking in.