After a two year hiatus, we finally got back out on the trails. It was LONG overdue. It was sad that the only dirt the RZR was seeing was the dust that collected on it while it sat in the garage. Injuries kept me away from it. As I recovered, we still weren't able to ride because we had no way to tow it. Last year, Frank traded in the truck for a new Camaro. It's not that he didn't love that car, he definitely did. It just wasn't the most practical. So, he had fun for a year. He and Victoria had a good run, but now I'm the only woman in his life. Besides, we needed a truck, Ikea just opened. How else will I get my goodies home?!
I had a rare Monday off - thanks, to the Memorial Day holiday. So, Frank and I went out to play in the desert. We thought we'd do a light run to get us back in the swing of things. I was curious how I'd tolerate the ride with my neck and ankle. We planned to ride out to Goodsprings, beginning near Las Vegas Blvd just south of Sloan. We headed north, and found ourselves on half-a-dozen trails to nowhere. We finally crossed the train tracks at Sloan and soon found ourselves on a familiar trail. Years ago, we rode Tie Rod Canyon in the Jimmy. It's more rock crawling than trail riding. That stretch was rough, but we held our own. I was relieved when we came to the Rainbow Powerline Trails, because those are smooth sailing. We went WAY out of our way, but we eventually connected with the trails that leads to Goodsprings.
We had plans to check out the Pioneer Saloon since I've never been. By the time we arrived, we were parched and hungry. Stella hit the spot! Frank had the hangover burger and I opted for the BLT. Much to my surprise it was served on a hamburger bun. It was better than I expected - the bacon was really good. After the stop at the saloon we made our way back to the truck. We got a good look at the new art installation and snapped a photo of the last spike on the railroad track which happened to be nearby. It was where crews from Salt Lake City and Los Angeles met in 1905. Now, if we could only get a high speed train between Vegas and LA. Wouldn't that be nice? Honestly, I'd be happy if they widened I-15 to allow for extra traffic lanes. Wishful thinking... In any case, we had a great time. It was nice to enjoy serenity of the desert. I definitely missed it. 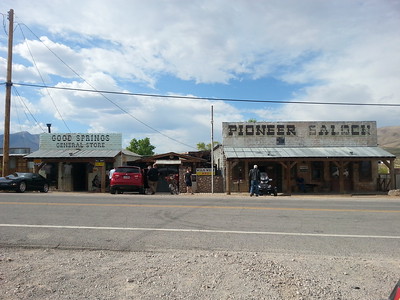 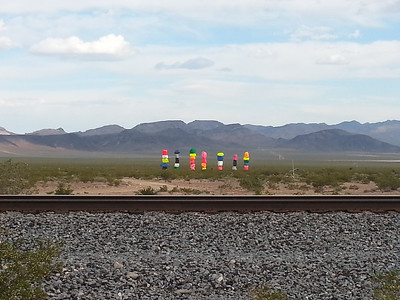 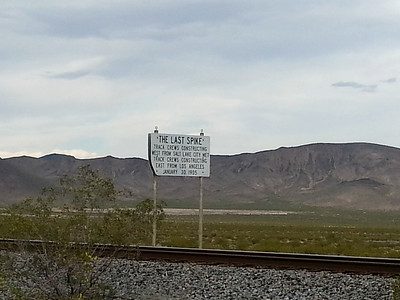