Getting There & Getting Around

Unfortunately, there are no direct flights to Nicaragua from McCarran. United offered the best fares & schedules to Managua. We opted for the red-eye on the flight out so we could arrive with ample daylight - driving at night is never recommended. Our flight to Houston was a breeze, though, turbulent. We were on a new plane which allows more room due to the slim seat design. We were offered a snack and choice of non-alcoholic beverages. Additionally, we each were able to check one bag up to 50 lbs for no added fee. For the second leg our flight, Frank surprised me with an upgrade to Business Class - He truly is the best!! This provided us access to the United Club at IAH. It opens at 5am and we were among the first to arrive. 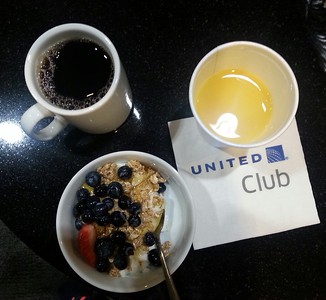 They offer a light breakfast with yogurt and pastries. I enjoyed it very much. We were able to catch a few winks before our flight as well. Upon boarding, we were offered a cocktail. Later, breakfast was served with a choice of an omelet or french toast. The food wasn't as tasty as Copa or Swiss Airlines, but it exceeded Hawaiian Airlines offerings. It was another bumpy ride, but we were comfortable. We were able to quickly exit the plane so we walked right up to the counter at Customs. We answered a few questions, paid our $10 entry fees, posed for a photo and passed right on thru to retrieve our luggage. Bags are put through the xray machine, our carry on was flagged for further inspection. There were a few people ahead of us, so this was our longest delay. After they had a look at Frank's medical supplies we were free to go.
We rented from National at the airport. We reserved a manual transmission 4WD Toyota Hilux. Supplemental insurance is required at $12.99/day. The rental agent spoke english very well so the transaction was easy to complete. GPS or WiFi units were $8/day which I found pricey, but we forked over the cash just to be on the safe side. Though, it wasn't really necessary. Unlike Ecuador, Google Maps was useful in navigating our various destinations. The car lot is next to the airport, we were given a ride to our vehicle. After a quick pass over, we were on our way.

The drive from Managua to Leon was pretty smooth. The road is in great condition and passing zones are well marked. There were many open stretches and few villages, so it was mostly ranches, fruit stands, and comedors (quick bite). We only stopped once for drinks, Diet Coke wasn't an option only Coke Zero. That and a water was 28 Cordobas or 99 cents.

We passed these trucks loaded with hay bales numerous times, the first must have been after lunch since many drivers strung hammocks under the trailers for shade and siesta.

Fruit stands offered a plethora of citrus and melons. It was not uncommon to spot livestock on the side of the road. We also passed many carts led by horse, donkeys or steers. 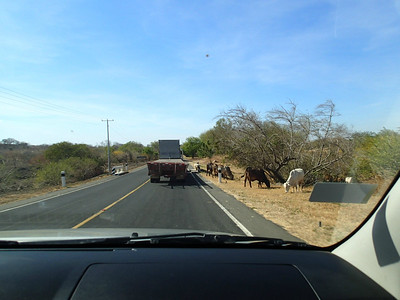 We did encounter one wreck that caused a bit of delay. One of the vehicles had flipped, I certainly hope everyone involved was alright.

Leon to San Juan del Sur was our longest ride, it was about 4 hours drive. Traffic was slow going through congested villages and it was much more hectic weekdays compared to the weekend. Our drive to Granada from SJDS took less than an hour on Sunday.
Prior to our trip, we were warned of corrupt police requesting bribes for petty or non-existent traffic violations. There was no radar or speed traps - at least, nothing apparent. We only encountered checkpoints, most weren't actively manned. One that was, pulled over the chicken bus ahead of us, so we were free to go.
Chicken busses are the most inexpensive way to get around the country. They varied in condition, most were old school buses. I think the exhaust and heat would be too much for me.

Between the volcanoes and Lake Nicaragua it was very scenic as we neared San Juan del Sur. 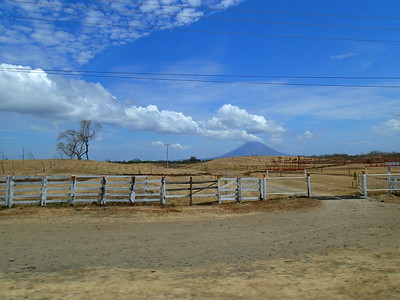 Almost everywhere was a two lane highway. Though, we did finally come across multiple lanes at the end of trip when driving into Managua from Granada.

It was never too far between gas stations and most were 24 hours. We drove all over on less than a tank of gas. We got amazing fuel economy.

There were no tolls. Signage was very clear, the only trouble I seemed to have was understanding the slight rights versus hard rights at various traffic circles. Frank was annoyed with me when I led him the wrong way in Managua - twice. One last thing to note is that high clearance, nor 4WD is needed to get around. A car would suit most needs. Even when upgrading to a automatic transmission, rates are reasonable. If getting behind the wheel doesn't thrill you, don't sweat it! Hiring a private driver is also an option.