As the end of 2015 neared, Frank and I dined at Nobu. We dined inside Caesars once before and we greatly enjoyed our experience. When I spotted a deal offered by Travelzoo it urged us to check out the other location over at Hard Rock. The promotion offered a $150 7 course dinner for two. We made reservations beforehand, but it didn't appear it was necessary. The dining room was rather sparse midweek.
We sipped on wine and sake, and snacked on edamame while we awaited the kitchen's selections. I'm quite fond of this style of dining. It takes all the guess work out of it, and I like not knowing what to anticipate until it's presented. We began with sushi: tuna, yellowtail and salmon. Tuna isn't typically my first choice, but Nobu dishes out really great quality that can rarely be matched. 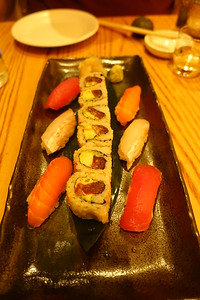 Yellowtail sashimi is hands down my favorite and this did not disappoint! 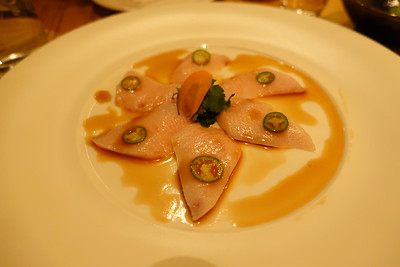 Because my love of Nobu's tuna runs deep, I didn't mind it a bit in the salad that followed. I wasn't as pleased by the fancy lettuce - I can't be the only one that finds frisee and the like, a bit too tickly. Can I? 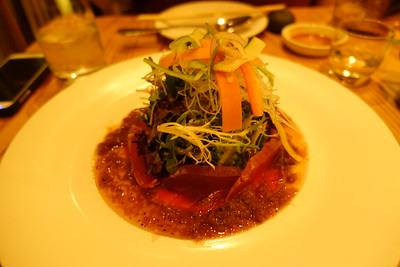 I knew from my last visit that the Black Cod was like butter so I was eager to dig in, but in this version the black truffles left me completely intoxicated. Way to up the ante, Nobu; Well played.

Then, dinner began to unravel. The Waygu Beef was so chewy even the greatest of flavors couldn't save it. Though, the sizzling presentation was nice.

The soup that served as the last course was rather unfortunate, as well. The broth was bland and the mushrooms were tough.

There wasn't great improvement with the dessert course. The lava cake lacked decadence that you might expect. The green tea ice cream, however, was quite delicious and refreshing. My only complaint was the one small scoop wasn't enough to be shared.

Our experience at Caesars far out shined this one is every aspect. Nobu is anything but cheap, so if you'll be forking over the cash - it's best to chose the Caesar's location for superior ambiance, service and eats.
Posted by Kellee at 5:00 AM