A Quickie in LA

As I mentioned my dad is visiting. Prior to his arrival, Amy and I discussed a trip to the Grand Canyon. It seemed like a good idea since we haven't been, but the logistics were not practical. Amy is uncomfortably pregnant and I'm just getting back on my feet, it's chilly and quite aways from home. We scratched that idea, and came up with Plan B, which was to introduce dad to the gloriousness that is Langer's Pastrami. I found a cheap van rental via ACE Rent A Car, customer service was lacking, but the 12 passenger van fit the seven of us well. We had plenty of personal space; which is welcomed on road trips. I secured a good rate last minute via Hotwire at the Holiday Inn Express & Suites in Hawthorne and booked two rooms.
We left Vegas about 8 o'clock Saturday morning. Our first stop was lunch at Langer's. Dad enjoyed the pastrami and the latkes, which came as no surprise. It was fantastic as always. LA was warm and clear, it was a lovely afternoon. I wanted to soak up the warm rays, it's been so chilly at home I couldn't get enough. We got settled at the hotel, and then we set off for the beach. Unfortunately, our plans were derailed when a storm blew in. We watched the rain fall at Manhattan Beach with hopes it would soon pass, but no such luck.
We ended up relaxing at the hotel, and later Frank and Nick were able to swim. Hunger didn't strike until late so we grabbed some eats at Ricos Tacos El Tio. It's a quaint space around the corner in Inglewood. The neighborhood has the reputation of being "ghetto" but Frank and I found no issue with it. We drove, but it was easily walkable from the hotel. We brought back tacos, burritos, quesadilla and a torta. The latter two were the best of the bunch. The torta is where it's at! The quesadilla wasn't only your typical grilled flour tortilla dripping with grease from meat & cheese. This was fully loaded with lettuce, pico and avocado. Muy bueno!
Sunday morning, we cruised through Inglewood seeing the Forum and Randy's Doughnuts; before arriving in Marina Del Ray, since we've never been. There wasn't much to woo us, so we drove around a bit finally coming upon a sledding track made from fake snow and hay bales located across from the beach. We hopped out for a photo because the concept cracked us up. Nick and I ended up going for a ride. I was nervous about my ankle, but they say it's healed... I'd never get the opportunity to sled at the beach again so I had to go for it. I totally admit poking fun at it, but it was a helluva good time. It was warm, I wasn't bundled, it was slick and speedy. They're on to something here in LA! 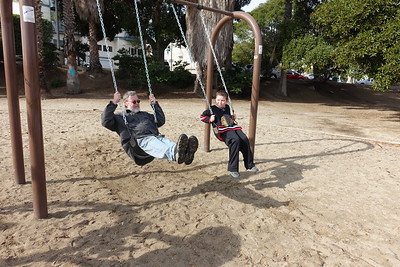 Afterwards, we stopped at the park nearby. The kids chased the birds, and we took turns on the swings. We were going to walk over to the beach but Mike preferred we go to Venice Beach. We took the short drive, parked and walked over to the water. The sand was pretty compact which I appreciated, I'm not quite ready for the loose sand yet. Clouds rolled in, it was a bit too chilly to stay too long. Plus, we were hungry, Mike had his sights set on Joan's on Third. So, we continued on to Hollywood for a bit. I thought a late lunch would be less hectic, but no such luck. The place was a zoo. Frank drove around while we placed an order to go. We chowed on sandwiches on the road back home. It was a whirlwind trip, but we enjoyed ourselves. It's always nice to make new memories. 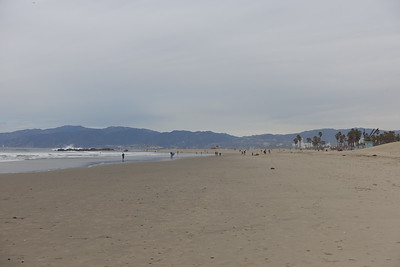