A Date with my Friend, Mona.

Sleep did not come easily in Paris; the routine became to catch up with everyone back home, wind down and force myself to get shut eye around 2am. I'd sleep 3-4 hours at best. In the wee hours, I'd plan my day, purchase tickets, read restaurant reviews, etc.

This morning, I was starved and sought out a little café across from Luxumbourg Gardens named Au Petit Suisse. I had a cappuccino and a croque madame. It hit the spot. 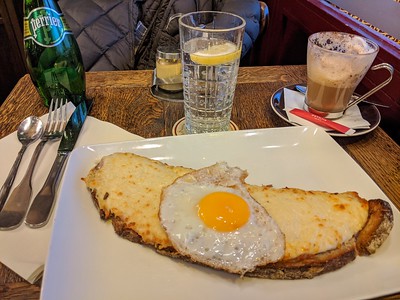 Belly full, I wandered the Luxembourg gardens. The fall colors were lovely. 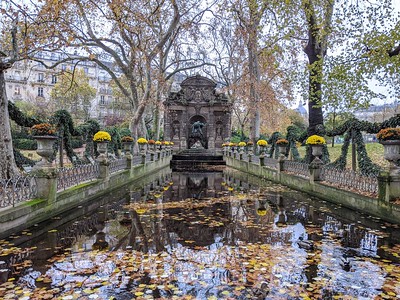 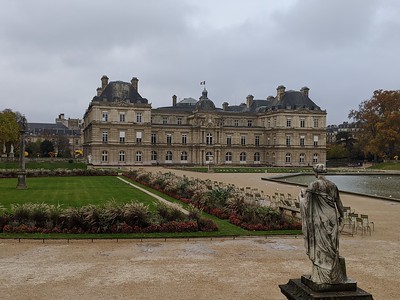 Next, I decided to see Sacre Coeur. The route I was given was unpleasant. When I arrived at the Chateau Rouge Metro stop, I was on edge. The surroundings were intimidating; I pressed on hoping for improvement. Surfacing street level did not change things. I was overwhelmed by the activity. I did not feel comfortable so I took the train back to Gare Nord. My instincts were not wrong according to reviews on Google (many have been robbed) and it was noted to avoid this route and take the Anvers station instead.

I tried to find an alternative route, but Google failed to provide directions to anywhere via public transit- it continuously offered Uber. It didn't seem like a feasible option. My frustration grew and I looked for anything on the map that was familiar.; traveling by foot seemed like the best option... at least, I was on the move. I found Pink Mamma on the map and opted to walk 20 minutes from Gare Nord via Boulevard de la Chappelle. I don't recommend this route either, but it seemed to be the best alternative. I walked with purpose and ignored hawkers and made my way through the crowd.

After the Barbes - Rochechouart street market (under the Metro line), there was an odd smell in the air. Everyone coming toward me had their faces covered with scarves. As I continued onward, my eyes, nose and throat began to burn. It took a minute to register - tear gas! By the next block, I was certain it was tear gas. To the south, you could see a huge crowd and insane police presence. I'd later learn that there were protests all over the city for the yellow vest anniversary. This stopped trains and forced closures through Sunday. Fortunately, I was a safe distance away, and the further I walked the air cleared. Approaching Pigalle Ave, I felt I could finally breathe. The red light district was a little seedy with strip clubs, massage and sex shops, but tourists walked the streets and the tear gas no longer lingered.

I was relieved to arrive at Pink Mamma. It was quite the journey. I was able to walk in and be seated at the counter on the third floor. There are perks to being solo. Before seeing the menu, I knew I'd be having the truffle pasta. One of the dishes they are most known for. I also enjoyed a well deserved glass of wine. The pasta was a perfect al dente. It was good, but honestly, I thought the dish was a little light on truffle flavor. Typically, I find dishes completely intoxicating even when it is only truffle oil used. This was very mild. 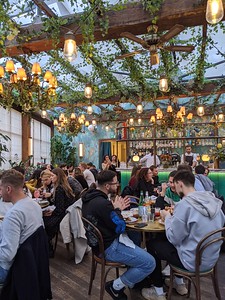 Train schedules were still unclear. I opted to walk to the Louvre. Again, it took longer than expected. Crowds were diverted by a huge group of police. 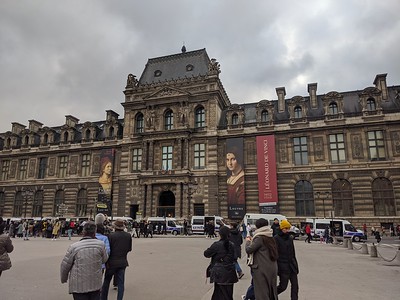 I had trouble finding the pyramid at the Louvre. Imagine that - something so iconic hiding in plain sight I was so annoyed. Time was ticking away and I needed to gain entry by 4:30 to receive priority. I only had minutes to spare, but I made it. Phew. Once my ticket was scanned I scoured the wing signage seeking a bathroom. I had zero success. Defeated; I asked staff and was told to go back to the pyramid. I was not having any luck. I had to exit where my ticket was just scanned, I had no idea if there was re-entry. I figured there must be, if you had to leave for toilettes, but I was leery given my luck of late.

Fortunately, my pass was rescanned without issue. I wandered the Richellieu wing taking in the sights and noted the time. There was only an hour til closing and I had yet to locate the Mona Lisa. I made it priority and figured I could wander with any time I had left. Scanning my ticket in the Denon Wing didn't go as smooth. It initially denied access, but they after reviewing the ticket they waived me on. Mona was easier to locate than initially thought - just follow the horde. Our meeting was brief, but I saw my girl. Then, I was able to leisurely stroll until the museum closed. Everyone departing at the same time led to long queues to exit and the longest lines for the restroom. I ended up paying to use the one in the connecting mall's food court. It was the only time it cost me to pee. I planned or timed accordingly otherwise.

From the Louvre, I wandered the grounds to see the Carrousel Arc de Triomphe and then made my way to Le Relais de Entrecôte for traditional steak frites. The dining experience is unique. Queues begin before the doors open, and despite rapidly turning over tables, crowds build during business hours. There is only one question asked immediately upon being seated - How do you want your steak cooked? You can also choose wine: white or red. The rest is streamlined. You'll begin with greens and walnuts and your steak-frites soon follow. You can have a second helping if you choose. The secret is in sauce. 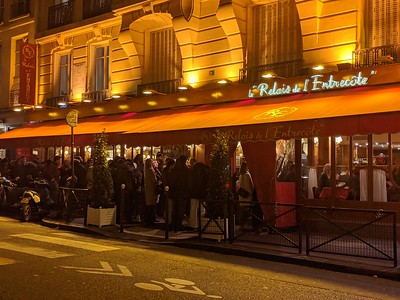 I walked off my dinner by wandering the neighborhood taking in the sights and sounds of Paris. I retired to the hotel early the events of the day left me weary. I was hopeful for a good night's rest.